Men’s Summer Style on a Budget

Sports, in some form at least, have existed for as long as humans have been on this planet and are an integral part of our everyday lives. They provide opportunities to build bonds with friends and family, improve our mental and physical fitness, and of course keep ourselves thoroughly entertained.

Some people prefer to get involved and play themselves, others acting as spectators, whereas some people enjoy wagering on sports through services like FOX Bet. And while the masses enjoy mainstream sports like football, rugby and horse racing, there are some lesser known sports that can be just as interesting and entertaining. Here’s a look at a few of the quirkiest sports from around the world.

Cheese rolling existed for hundreds of years in Gloucestershire, with written records going back to 1826. However, this weird sport became popular in the mid-2000s when videos of it surfaced on YouTube. The Cooper’s Hill Cheese-Rolling and Wake is an event held each year on Cooper’s Hill just outside of the English town of Gloucester.

Originally a local event, the fame created by the videos has seen people travel from all over the world to compete, with international winners including ‘athletes’ from Australia, the United States, Nepal and New Zealand.

Cheese rolling involves a 4kg block of cheese shaped into a wheel, that’s rolled down Cooper’s Hill. Competitors have to chase the cheese, which is given a 1-second head start over the people, meaning the winner isn’t the person who catches the cheese, but who reaches the finish line first. Therefore, the cheese rolling event is a downhill race with a wheel of cheese added to make it more interesting. The winner receives the giant block of cheese.

Since the cheese can reach speeds of 70mph, a foam replica replaced the 4kg cheese from 2013 for safety reasons. The winner still gets a block of cheese, but it doesn’t actually roll down the hill.

Double-decker buses are synonymous with London. Their unique size and shape helping them stand out from public transport in other parts of the world. When introduced outside of London, the double-decker fared much less favorably with the British public, who criticized for being uncomfortable, unclean and slow. Perhaps the reason why some motorsports enthusiasts decided to repurpose these two-story, mass transit machines into race cars with double-decker bus racing. 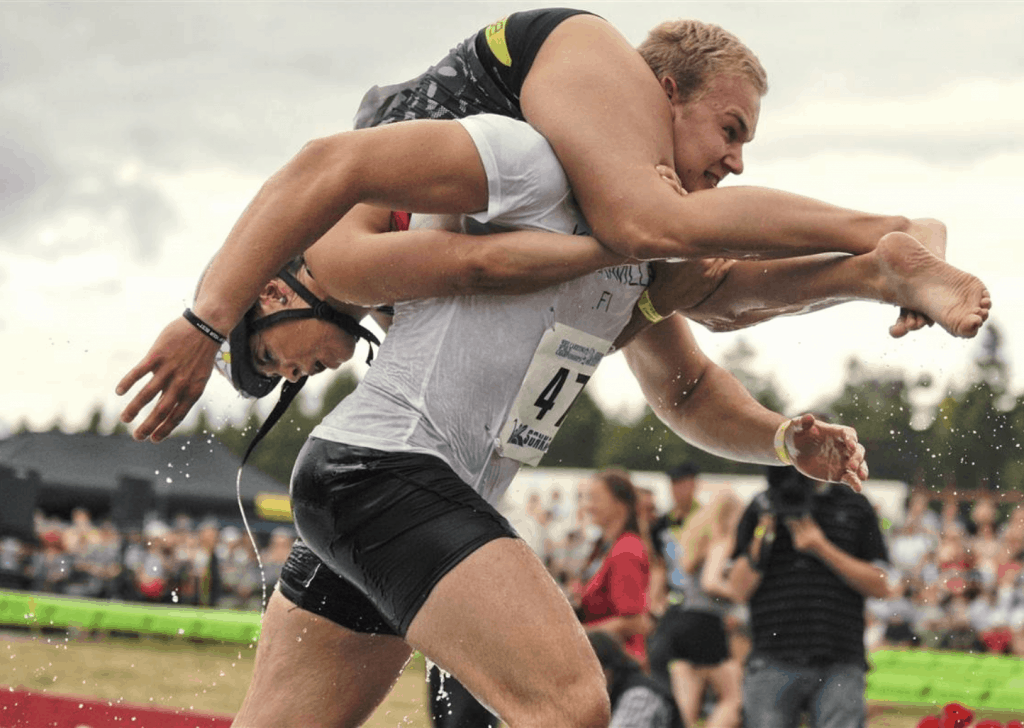 This Finnish sport, known natively as eukonkanto, is most popular in Eastern Europe and Scandinavia. The championship, which originated in 1992, takes place every year in Sonkajärvi, Finland, with the winning couple receiving the wife’s weight in beer as the grand prize. Traditionally, the male competitors had to carry their wives around a 253.5m obstacle course similar to that of a Tough Mudder competition.

But today, the wife doesn’t have to be married to the carrier; the only requirement is that she is at least 17 years old and weighs at least 49kg. It’s also an official rule that “all participants must enjoy themselves,” although it’s unlikely anyone has been disqualified for breaching this one. The 2018 World Champions are a couple from Lithuania, but previous winners have originated from Finland, Russia and Estonia.

It just goes to show anything competitive can be a sport, whether it be racing old buses, carrying your wife or chasing a giant block of cheese down a steep hill. Perhaps the wife-carrying rule of participants enjoying themselves is the only real required element for any sport.