At The MALESTROM we make no secret of our love of mystery, dark and foreboding, chilling tales with thrilling twists and turns be it film or the written word. In our latest book review we’ve got some seriously sinister situations that’ll have you turning those pages faster than a buttered bullet, yes, psychological thrillers are the order of the day.

Village of the Lost Girls by Agustín Martínez 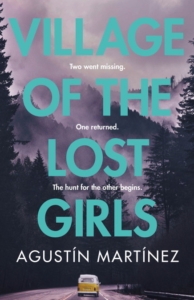 Agustín Martínez is one of Spain’s most prolific screenwriters conjuring up enthralling plots on some of the biggest crime series’ in the country. In this his first novel Village of the Lost Girls, Martínez takes the reader on a breathtaking thrill ride through the Pyrenees as a complicated missing person case is reopened after 5 years.

The small village of Monteperido, situated at the foot of the impenetrable peaks of the Pyrenees, is rocked when two eleven-year-old girls Ana and Lucia go missing on their way home from school. With no clue to their whereabouts or evidence to reveal the circumstances surrounding their disappearance.

It is only five years later when a car accident – containing an injured but still alive Ana – leads to the case being reopened and sets in motion a thrilling chain of events that reveals some hidden secrets the village is harbouring and a whodunnit that’ll leave you scratching your head.

Were they abducted? If so by whom? Where has Ana been all this time? What has happened to Lucia? Martínez has crafted a genuinely gripping page-turner, creating a dense and foreboding atmosphere. There are twists and turns aplenty with a fabulous reveal. Well worth your time and effort and here’s hoping for more from Martínez in the near future. 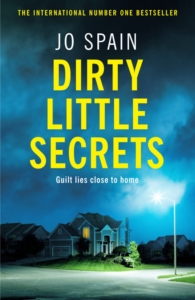 Number one bestselling author Jo Spain returns with a sinister and perfectly executed chiller. In the privileged, seemingly picture-perfect gated community of Withered Vale, life couldn’t get much better for the well-heeled residents or at least that’s how it seems from the outside looking in, but on closer inspection this couldn’t be further from the truth.

When Olive Collins’ dead body is discovered rotting after three months, what at first appears to have been a self-inflicted demise is clearly a result of a more sinister intrusive scenario. But who could have done this and why? Well, it turns out the list of candidates is longer than the Great Wall of China.

Beneath the pristine facade Olive’s neighbours are keeping more secrets than Julian Assange, as soon to be retired Detective Frank Brazil and his feisty, young, determined sidekick Emma Child set about sifting through the rivalries, jealousy, affairs and disturbing pastimes of her seemingly shocked and saddened neighbours. One thing they all have in common a good enough reason to want Olive Collins dead.

Jo Spain is establishing herself as a master of the psychological thriller and this compelling read is no exception. Superbly crafted as the reader get’s to know the protagonists and antagonists first hand as she flits from family to family to offer a point of view for each and every character. More big things expected on this evidence.

The Burning House by Neil Spring 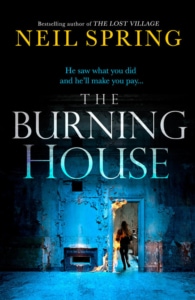 Author Neil Spring has had a pretty good run so far. Delving deep into the psychological chiller zone, his books tend to be inspired by a degree of real-life events. His debut novel The Ghost Hunters was based on the life of psychic investigator Harry Price and was turned into the hugely successful ITV drama.

In The Burning House, Spring once again touches on history as he centres the story in Boleskine House, set on the shores of Loch Ness and home to all manner of unexplained and mysterious goings on. Estate Agent Clara is a woman with a past, a past she’d rather leave well and truly behind her, but life is never that simple.

With an abusive ex-husband close to tracking her down, Clara needs some money and to do that she must make a sale. The foreboding period property Boleskine House would make the perfect candidate and Clara thinks a small fire might just help bring the price down. Assuming that is, nobody knows what she’s done!

An extremely tense and thrilling ride, full of mysterious goings-on, the supernatural elements take the psychological drama up a notch and Spring has singled himself out as an extremely adept horror writer. Absorbing and sinister, more, please.