Some of you might remember the name Elisa Lam, a 21-year-old Canadian student, whose naked body was found in 2013 in a water tank on the roof of an American hotel with a very murky past. Many of you will certainly recall the unsettling CCTV video of her in the hotel’s lift acting in a very peculiar manner.

Four years since she was discovered the case remains somewhat of a mystery, but there are many theories about what really led to Elise’s death, some straightforward, some much more sinister.

In January of 2013 Lam set off on a tour of the West coast of the USA. Starting in the city of San Diego she went about the normal tourist pursuits such as visiting the zoo, which she wrote about on her colourful Tumblr blog. Next stop on the tour was LA, where on the 26th of the month she fatefully checked into the Cecil Hotel. 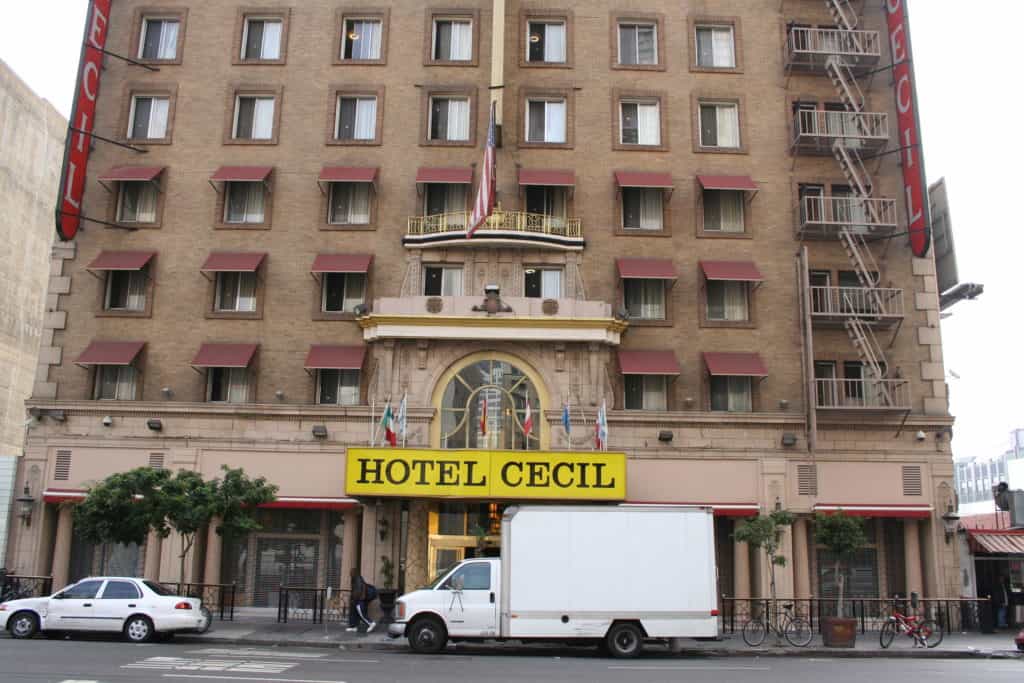 The Cecil Hotel certainly has history, and a dark one at that. Situated in an impoverished part of the city, the 1927 building is one of Los Angeles’ most famous hotels due to the events that have taken place there over the years. Amongst the unsavoury characters to call the Cecil home at some point are notorious serial killers Richard Ramirez and Johann Unterweger. Ramirez, know as the ‘Night Stalker’ lived there from 1984-1985, in this period he killed 13 women, dumping his bloodied clothes in the bins round the back.

Austrian murderer Unterweger, thought to be a Ramirez copycat, took up residence there and went on a spree of prostitute killing. In 1962, Pauline Otton jumped from her ninth-floor room, killing George Gianinni when her body landed on him. There was also the unsolved murder of Goldie Osgood, known as the Pigeon woman. She was found strangled, raped, and stabbed inside her room on the 7th floor.

It’s also widely been reported that murder victim Elizabeth Short, better known as the Black Dahlia, had her last drink at the hotel shortly before her death in 1947. The hotel was even depicted in a recent series of American Horror Story: Hotel under the guise of the Hotel Cortez. Let’s get back to the most recent tragedy to happen there.

Elisa spent five days sightseeing in the city and was then due to check out and continue on to Santa Cruz. On this particular day her parents never got the normal daily call from her and worriedly called the LAPD to report their daughter as missing. The police and tracker dogs searched the hotel and the roof, but nothing was found.

Time passed, almost two weeks, with no signs of Elisa. It was around this point that guests of the Cecil Hotel began complaining about the drinking water. It was discoloured and tasted awful. Low water pressure was also noted. This led to a check on the plumbing and ultimately the discovery of Elise. It turned out that it was Lam’s dead body that was contaminating the water supply.

The only evidence of Elise, before she went missing is the strange CCTV footage of her inside the lift of the hotel. It was released by detectives in hope that someone may recognise her and be able to assist with the investigation. In the early hours of the morning she enters the elevator and seems to be hiding from an unseen presence. She goes on to press many of the lift buttons, stands in the corner of the space and then later moves her hands in an eery way and seems to be reasoning with someone, or something, although only Elise is visible.

Another odd thing to note is that the lift doesn’t operate for all the time she’s in and near it, despite her attempts at pressing multiple buttons. Yet in the final time we see her exit the scene the lift starts to operate as normal. Watch the full video here:

The elevator footage released to the public was slowed down and almost a minute of  time seems to have been edited out. Although it has never been discovered why. The bizarre goings on seen on this tape is the prime reason this case has been talked about so much around the world, we may never know the truth surrounding it.

Lam was bipolar, a condition for which she took medication to control. Many have thought this may have explained her very odd behaviour that in turn contributed to her committing suicide.

But her friends and family attested that she was happy and at the time in no way had cause to take her own life. The last person known to interact with Elise was bookstore manager named Katie Orphan who said she had come into the shop to buy presents for her family. Orphan is quoted as saying Lam was,

And here’s where things get even stranger, in order to have killed herself in this manner she would have had to access the hotel’s alarmed roof that was locked. Strip herself naked. Climb a ladder up to the water tank, get herself inside a very awkward space, then close the heavy lid of the tank she’s in. Certainly improbable.

Firefighters at the scene had to drain the tank and cut a hole in it to retrieve her body because of the weight and difficulty of opening it. So you’d think this would be tricky for a young girl. Yet despite all this, her cause of death was officially ruled as ‘accidental drowning’.

There’s been a huge amount of theories surrounding what actually did happen to Elise that night. Many expected drugs & alcohol to have played a part, yet no traces of drugs or alcohol were found during the autopsy. A bipolar episode has as mentioned been suspected, with many suggesting it seemed like she was hallucinating in the lift footage. Yet tests showed she had been taking her prescribed medication.

Some have suggested employees could have been involved? They’d have knowledge and access to the roof space and would also be able to stop any alarm going off. Yet there were no known suspects at the hotel and there was no evidence of trauma or sexual assault.

Could it have been demonic possession? Or a ghostly presence? Something certainly seemed to be stopping that lift from working while Elise was in and around it. There are some startling similarities to the plot of the 2002 japanese horror film, and the 2005 American re-make, Dark Water.

The movie follows the tenants of a building who amongst other spooky goings on experience black water coming from their taps. Ultimately a girl’s body is discovered in the rooftop water tank! Could someone who’d seen the film acted out a murder using it as a blueprint?

Or there’s the theory of the Elevator ritual. Dubbed the most dangerous game in the world, this is an urban legend born out of Asia. It’s claimed it can take you to another world by stepping into a lift with at least 10 floors and pressing the floor numbers in the correct sequence.

During this game you’re meant to come into contact with a ghostly presence that you mustn’t interact with. Far-fetched, but was Elisa Lam attempting to play this game? Or was she playing hide and seek? Or possibly just hiding? Was her assailant simply not visible off camera?

Another slightly disturbing fact is Elisa’s blog remained active for many months after her body was found. Elisa’s phone was never found after her death, yet all her other belongings were. Could someone have been posting using her mobile? And could that person have been responsible for what happened to her?

The case around Elisa’s death may never be solved. There were never any known suspects and at this stage new evidence is unlikely to come to light. All we really have to go on is the disturbing video footage, and the unexplainable actions of Lam.

When all is said and done it’s a truly tragic story of a girl who was clearly suffering at the end of her young life, and as for the Cecil Hotel it’s another disturbing instance to add tits’s grisly past.