It was way back in February 1995, when Manic Street Preachers guitarist Richey Edwards’ abandoned Vauxhall Cavalier was discovered at the Severn View service station. The close proximity of the vehicle to the Severn Bridge, a known suicide spot, led to the widespread belief that Richey had indeed taken his own life.

Much of the publicised information regarding his behaviour and the events running up to his disappearance cite the well-known rhetoric that Richey Edwards was a complex character.

His struggles with depression, self-harm and alcoholism were no secret, nor was the fact that he was not looking forward to the scheduled promotional trip he and fellow band member James Dean Bradfield were supposed to take to the US on the day of his disappearance.

But, do these factors alone offer enough of an insight into Richey Edwards state of mind, that, suicide be a satisfactory conclusion to events. Does the fact that he made daily cash withdrawals in the run-up to that fateful day, mean anything. And, are the well-publicised sightings, in Goa, Lanzarote and even back home in Wales deserving of any credence?

With unprecedented access to those closest to him, most significantly his sister Rachel Edwards, Withdrawn Traces pieces together the most detailed account to date of the timeline leading up to his disappearance. Using his own personal archive of diaries and letters, the recollections of those that saw him last, and by examining fresh evidence, this book delves deeper and gets closer to the truth than anything before.

In fact, it opens up a whole new set of questions, and details an unsatisfactory investigation and a catalogue of errors by police, that paid scant regard to any alternative scenarios, which as Rachel Edwards herself says,

“People seem to think there are only two outcomes when it comes to discussing what happened to my brother… One is that he walked off into the sunset to go somewhere exotic and the other is that he jumped off the bridge. There are a million different scenarios between these two things.”

Who for example is the mysterious and unaccounted for Vivian? A young female acquaintance, known to have spent at least part of the evening with Richey at the Embassy Hotel the night before he vanished.

And what of Edwards deep fascination with the literary giants whose work featured a rejection of society and its norms from JD Salinger’s Catcher in the Rye to the poet Arthur Rimbaud, it’s clear Edwards romanticised the very idea of disappearing, the mythical rock star immortalised.

And, as if to underline the theme, a box found on Richey Edwards hotel room bed addressed to former girlfriend Jo with a note reading ‘I Love You’ among other items feature a reference to Novel with Cocaine by M. Ageyev, an author who on completing this work vanished without a trace never to be seen again.

So many aspects of the story just don’t add up and his sister Rachel’s exhaustive search for the truth uncovers more than enough plot holes and borderline incompetency from the various law enforcement involved to lead you to think there could have been and should be more done to gain satisfactory answers to the questions surrounding the truth about Richey Manic.

This is a fascinating book full of new and relevant information, which also includes a chapter closing letter of love for those who miss him most.  With a fresh perspective and new discoveries based on some previously unseen sources and candid recollections, the many pieces of the puzzle are there and perhaps just need organizing correctly.

“You’ve got to reach out on a massive level. Once we’ve done that we’ll fade away. You’ll never hear from us again.” – Richey Edwards

Withdrawn Traces: Searching for the Truth about Richey Manic by Sara Hawys Roberts is out now. 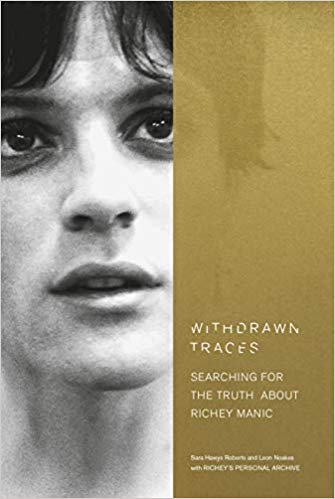