There is an increasing number of men who, leading increasingly hectic lives have sought out the comfort and solace of the yoga mat. Once the domain of the yoga bunny with the body perfect, we’re now seeing a surge in men attending classes all across the Western world. A quick look at the reported benefits and it seems a no brainer.

On a physical level the increased flexibility, muscle strength and toning of the body, coupled with a stronger immune system make yoga a necessary addition to your weekly training schedule. However, it is possibly the much-vaunted effects on one’s mental wellbeing that stand out in an ever more chaotic and demanding modern world.

With a history stretching back thousands of years, references to yoga can be found in India’s earliest known scriptures. If explored in all its forms it can be deeply spiritual, so best to approach it with a completely open mind and who knows maybe you’ll achieve the mental serenity and clarity the like of which has become its trademark and more significantly be able to sit cross-legged, a pose last achieved as a three-year-old in kindergarten.

It would appear many men are keen to give yoga a try only to be put off by the thought that they’re not agile enough, or the overwhelming number of women attending classes. Well, the point of yoga is to increase that agility, and come on, where else will you get the opportunity to hang out with so many flexible females?

The MALESTROM thinks it’s time you got to grips with your yin and your yang and embraced the longevity-inducing benefits of yoga. With some wise words from Ninjutsu Black Belt and prominent Yoga Teacher at Triyoga London, Marcus Veda, we’ve comprised a short beginners guide to start you on your journey.

“If you immerse yourself in yoga and practice it regularly, you will realise your physical and mental wellbeing are joined. It can help you with stress, anxiety, depression and all the pressures of life in the world that we live in today.” 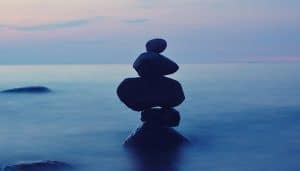 This dear friend is your starting point, a place where you will learn the fundamental movements and techniques that will form the basis of every other aspect of yoga you may choose to undertake.

Hatha is a general term for most forms of yoga in the West, and it refers to the practice of wilful or forceful physical postures, the most famous being ‘down dog’. And if you’ve never done yoga before, if you’re a genuine beginner, recovering from an injury or just keen to improve your flexibility, then this is your starting point.

The most important thing to consider is that every position should be conducted very slowly, and you should never push yourself until it hurts. A good yoga teacher (preferably taught in India) will never tell you to force yourself into a position, never tell you to do anything that causes pain and every posture should be a slow extension of a body position that should come to you naturally.

Listen carefully to the teacher, especially taking note of the breathing, and very slowly stretch yourself into the position that they advise. Your first attempt might seem impossible, but breathe deeply and follow the stretch until you feel the slight pull of the muscles and continue breathing gently while holding the position.

“Yoga is not just physical, it is also hugely beneficial for the mind also and that’s such a big part of it.”

Take the class one step at a time and never push yourself too hard, especially when starting out. And it’s also advisable to introduce yourself at the beginning of the class and let your teacher know you’re a complete novice to the oldest form of exercise on earth.

“Men often think yoga is too soft or they’re not bendy enough, but if you take your time you can improve every lesson and you’ll find yoga is exactly what you need and when you need it.”

This is continuous free-flowing Hatha yoga that is only for the fittest. There are various levels and it can bring dramatic results, both in posture and fitness. Once again start with the basics and work your way up but be prepared to sweat, there will be no stopping for 75 – 90 minutes and by the end of the lesson, you should be physically pushed to your limit and your mind completely cleared of all stress and anxiety. I

t is strongly recommended that you attend a good half a dozen Level 1 Hatha yoga lessons with a good teacher before attempting Vinyasa, as you will be performing every move you’ve learned non-stop with barely a break, except for the odd minute in child’s pose. This is very close to a full posture and mental work out.

“Everyone who comes to the mat finds it hard….but it can also compliment other sports. Ryan Giggs played some of the best football of his career after he took up yoga and played for Manchester United into his 40’s.” 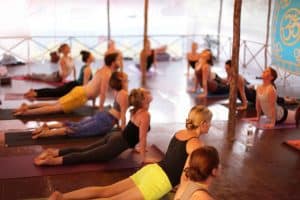 This is certainly one of the most popular forms of yoga, gaining huge popularity in recent years and also carries the most warnings. Bikram/Hot Yoga basically forces you into Hatha yoga positions in an artificially hot environment from a partially clothed teacher, often with a headset, shouting instructions at you.

They’ve been nicknamed ‘Yoga Nazis’. It is probably the furthest away from what yoga is supposed to be than any other practice today, and it can also potentially give you the most injuries, so beware.

The positives of Bikram/Hot yoga is that if you have a muscular ache or a minor muscular pain, you can help diminish both the pain and injury through the heat which relaxes your muscles, but also by only performing the yoga postures slowly, no matter how much the teacher shouts or tells you to push.

It is also a great detox as you will sweat buckets and to a degree, it can help you lose weight. You can often feel a sense of heightened awareness after a class, which is also like a natural high, this in some parts explains why some people become addicted to it. But just the same as the environment, the sensation is artificial as it’s been created by increasing your body temperature and then exposing you to the air outside at a normal temperature.

The biggest problem with Bikram/Hot yoga is that you are only conducting Hatha postures in extreme heat when your body is artificially supple, so the results will be severely diminished when you return to normal temperature. If you don’t believe us, try performing a Bikram class at normal temperature, you can’t, and you’ll probably injure yourself!

This is often called Power Yoga. It was brought to public attention by Sting, and no matter what you think about the ex-Police frontman, his physique puts most people in the shade and combined with the fact that he looks at least ten years younger than his years belie him, Astanga says a lot.

Ashtanga is a series of Hatha postures that are performed and held, dramatically increasing the strength of your muscles and your overall physicality. It is also one of the most athletically demanding to perform and just a few classes can result in a dramatic difference to your overall physique and strength. On the downside it is repetitive and injuries can happen, so exercise caution and don’t push yourself too hard.

The entry point is again at Level 1 and it is imperative that you inform your teacher before you start if you have never performed Astanga before. Once again it is also seriously recommended that you attend a minimum of half a dozen Level 1 Hatha classes first.

This is a deeply spiritual practice that blends deep breathing, meditation and often chanting. It’s not for everyone and it’s important that you approach a class with an open mind and also be open to exploring deeper practices of yoga. It often incorporates dynamic breathing techniques, meditation, and the chanting of mantras with the goal of building physical vitality and increased consciousness.

If this doesn’t sound like your cup of tea as you’ve heard there are a number of different options but it’s well worth trying once for the experience at least.

All of the above is only a small selection of the most popular forms of yoga, but for those in the know, yoga can have a dramatic and life-changing effect on your wellbeing. Not only are there the significant developments to your posture, strength and flexibility, but it can help you beat anxiety, depression, stress and many other mental health issues that any one of us can often suffer on a day to day basis.

When practiced at it’s deepest, a profound peace of mind can be found alongside a sense of enlightenment. Without exaggeration, it can change your life.

Find yourself a good instructor in an environment that you feel comfortable in. After all, if you don’t relax you’re unlikely to become a yogi anytime soon. As with any form of exercise, there’ll be those that go to extremes and many of the classes on offer might not suit you, so shop around. For the many veteran practitioners:

“Yoga is the key to a longer and healthier life”