Has it really come around so soon? Surely not? It seemed only yesterday that people around the UK were all doing the ‘mobot’ and Usain Bolt was basking in golden glory amidst an enraptured East London crowd. Indeed we at The MALESTROM have only just about finished our long lie down after the excitement of London 2012, yet here we are again in Olympic year.

The travelling carnival has been displaced to the more exotic climes of Rio, with all eyes of the world focussed on the Maracanã stadium, well 3 billion at least. It’s here we are witness to the opening ceremony. A spectacle like no other, a spectacle that always promises to be terrific and torturous in equal measure, yes the Rio 2016 opening ceremony

The MALESTROM doesn’t make a habit of watching these things but given the levels of bizarre we can expect we decided to cast our eyes over it and let you know the good, bad and ugly that was likely to be on show.

The artistic director in charge of this affair was Fernando Meirelles the tour-de-force director of Brazilian film City Of God. Surely he would wow the crowds? Surely he’d offer an altogether sunnier experience than Danny Boyle and his dancing NHS beds? He promised this would be the “cool” opening ceremony, but did he deliver?

It began in Rio with a video package of waves and aerial views of sport taking place in Brazil. It helped put into perspective how cold and miserable Britain is in comparison (even though this is Winter in Brazil!). Next into the stadium came hundreds of volunteers who flapped around big sheets of tin foil that turned into a countdown clock.

So far so unspectacular. The feeling of being underwhelmed continued with a low-key rendition of the national anthem and a bit of flag raising.

But hold on, they’re about to tell the story of evolution promise the commentators. And here comes a big puppet of a crab! And they’re projecting images onto the floor of the stadium! You have our attention. Until that is, we get more volunteers playing with lots of long elastic bands.

Next up is the story of immigrants coming to Brazil, and there’s no points based system here. Thankfully they didn’t show the Europeans arriving and wiping out many of the indigenous population with their diseases and murderous ways. That might have been a bit awkward.

Other moments of note to follow include a Tom Selleck lookalike flying an old plane out of the stadium then round the city in a pre-recorded package, then not long after supermodel Giselle turns up adding a drop of glamour by sashaying through the arena floor to a piano version of The Girl From Ipanema.

It was just a shame they seemed to have dressed her in the same tinfoil the volunteers were flapping about earlier. The theme here is definitely that of austerity. After this, we get lots of dancing which culminates in a big chaotic rave-up presided over by a pair that wouldn’t have seemed out of place as the entertainment booked for the local care home. They certainly got them going as they danced on mass. Or should that be mess?

After all the dancing fun things took a much more serious tone as the Rio Olympics shoved the threat of global warming so far down our throats that the world vomited. And it all must be fact as fancy graphics illustrated our demise. And as we all know graphics never lie. Nothing says party like telling the viewing public we are all going to burn and die.

It certainly felt a little preachy and hypocritical given games organisers had failed in the promise they made to clean up their polluted waters that the swimmers and sailors have to contend with this month.

To further add to the buzz being killed, Judy Dench (clearly playing an angry schoolteacher), lends her voice to a video piece about seeds turning into trees, or something like that. At least we can feel Great Britain contributed something to this spectacle via Dame Judy. And then we get some fireworks to help us all forget about our mortality, thanks, Rio. 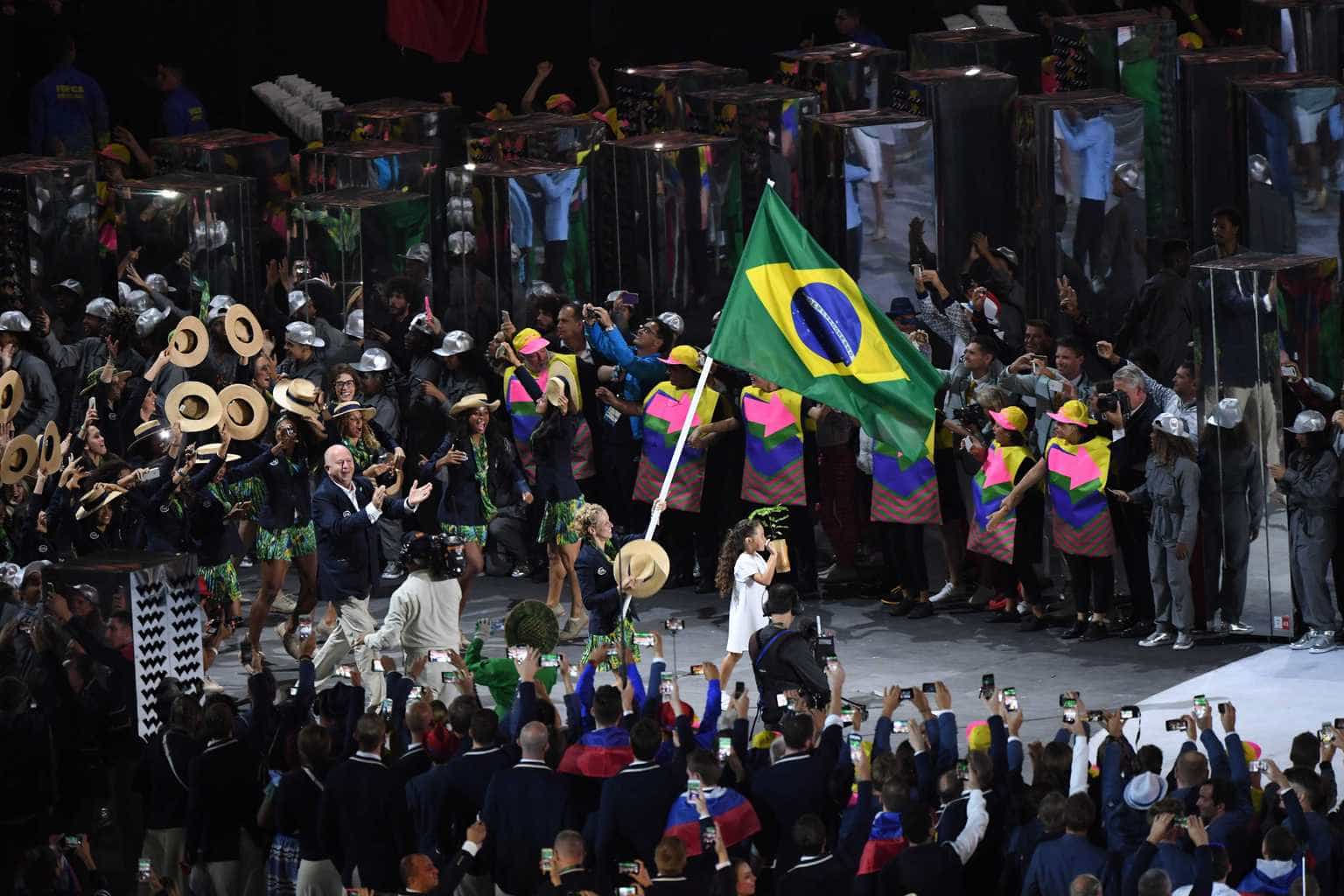 No thanks can be given for the next section of the evening… the parade of countries. To say this dragged may be the biggest understatement of all time, it may have gone on for several hours, it would be very difficult to say. No event taking place at these games will be able to hold a candle, or should that be a torch, to the stamina needed to get through this part of the ceremony.

Exhaustingly nation after nation strolled out (in order of the Portuguese alphabet of course) most with phones in hand taking countless selfies. And if this wasn’t tedious enough the commentators rolled out the worlds worst facts probably copied and pasted off Wikipedia.

There were even suspicions they could be making a few quid from Thomas Cook on the side as they recommended Cape Verde as a good non-EU holiday option! Even letting viewers know where to get flights from. And we should all thank the BBC for letting us know which countries we still ‘own’, #imperialism.

The MALESTROM became slightly interested again when Team GB showed up, Andy Murray flag in hand. One thing’s for sure, we will win no medals for style at these Olympics if those red shoes are anything to go by.

After the brief excitement of seeing the Brits, we were plunged back into more tedium and facts. We learned about which countries were the best oil providers. Was this still the Olympics, or just a means to pick the next targets to start a war with?

After the never-ending parade, we get a few speeches from officials. Most notably one from seemingly the most nervous man in the stadium, Chairman of games organising committee Carlos Arthur Nuzman. His hands were shakier than a jelly on a wobble board. We can tell what he had on his mind as nearing the end of his speech he said, “always believe in sex” which he quickly amended to “success of the Rio games”.

The loudest, if not only, boos of the evening were reserved for acting President of Brazil Michel Temer as he declared the Rio games open. Maybe the Brazilian public wasn’t keen on all the money spent on the ceremony (despite being a tenth of the London budget) in light of the nation is in the grip of the worst recession for years.

Or it could have been Temer was simply unelected by his people? The MALESTROM tries to avoid politics wherever possible but just saying.

Luckily for him, more fireworks were on hand to drown out the chorus of disapproval aimed at him. Business sort of picked up in the weirdness stakes after this when an old man started clapping on a matchbox while a little boy danced along. Which sort of segued into a massive carnival, something we know Brazil is the best in the world at.

It felt like the party had started now at least. If anyone still had the energy that is. How many hours had this gone on for?

The final act of the night, the lighting of the very beautiful sculptural cauldron, was handled by some ex-athletes who most people probably didn’t know. Pele was meant to be the star of the show and have the honour of sparking the flame but pulled out because of ill health. Either that or he heard it was kicking off outside the stadium and thought he’d keep his distance.

His replacement was the less showy Vanderlei De Lima, most famed for being attacked by an Irish priest when leading the marathon on Athens. He lit the flame in a fittingly low-key way after walking up a flight of stairs, nothing spectacular here.

And that was that, the Rio 2016 Opening Ceremony was done and the Rio Olympics was go. The budget cut certainly showed at this curtain raiser, but an Olympics isn’t judged solely on its first act, it simply sets the tone. Let’s just hope we get more of the carnival party element rather than the apocalyptic warnings. There are enough of those at home.

After what feels like seven or eight hours The MALESTROM is ready for some proper sporting achievement now. That’s what we watch the Olympics for, call us old fashioned. Rest assured we’ll be giving the closing ceremony a wide berth. Life is surely too short to sit through both.