More Movies that Totally Mess with your Head

Football agents really can equate to league success, according to new research, which reveals that agent spending has resulted in Champions League qualification and title success for the league’s biggest sides.

Analysis of Premier League agent spending data for 2017-18 carried out by Betting.Net shows that clubs forked out an average of £193,970 on agents for every point earned during the league campaign.

Manchester City’s marquee line-up meant they spent big on agents, forking out £23,475,309, but their record-breaking 100 points meant the eventual champions only spent £234,753 per point.

Tottenham was once again the anomaly, with the notoriously frugal team spending just £93,164 per point as they secured automatic Champions League qualification once again.

After becoming the first team in Premier League history to make zero signings during the summer transfer window, the North London team look set to reduce this total further still in 2018-19.

Burnley’s run to Europa League qualification surprised many, but it was not due to agent spending, with the North West club spending just £3,299,917 on agents – an average of £61,109 per point, the lowest in the league. 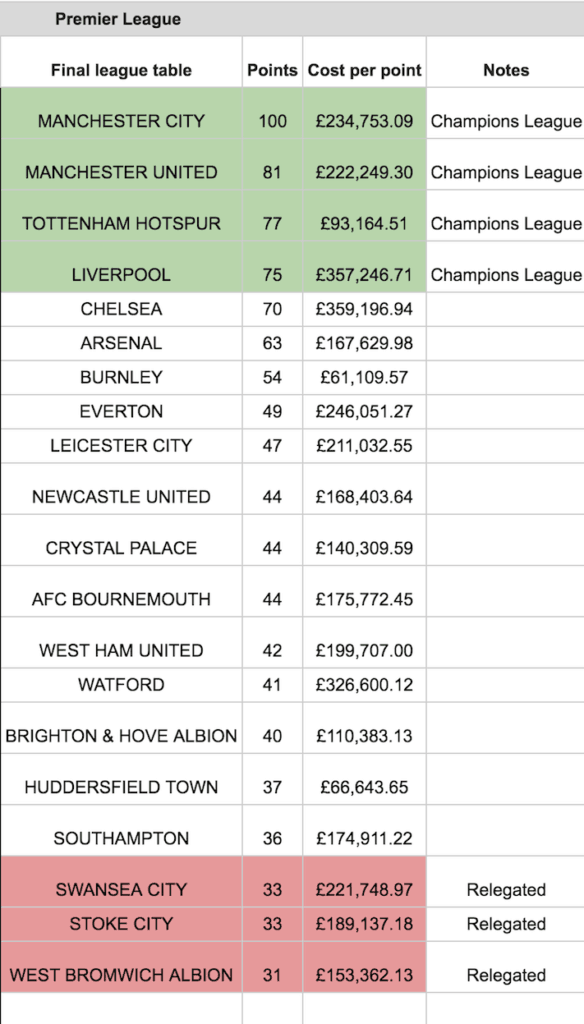 It was a different case in the Championship, where the big spenders all failed to make an impact. Sunderland were the worst culprits, forking out £4,370,897 – the second highest total in the league behind Aston Villa’s £5,510,180.

But while the Villains narrowly missed out on a Premier League return after falling in the play-off final, Sunderland finished rock bottom of the table.

The Black Cats averaged an astonishing £118,132 per point as they slid down to League 1 – more than Spurs spent in the top flight while qualifying for the Champions League.

Championship winners Wolves, meanwhile, spent just £2,001,023 on agents across the season, with their 99-point haul averaging £20,212 per point.

With Wolves making a slew of signings over the summer, this total is expected to rise in the 2018-19 Premier League season, but only time will tell whether each club’s investment is enough.

Head on over to Betting.Net and remember to gamble responsibly!