The Benefits of Eating Organic

The best method of defence is attack? Who dares wins? A moving target is hard to hit? Our new Prime Minister has hit the ground not so much running as rumbling into battle, like a tank. As our Political Correspondent Peter Spencer reports, the only
question is whether he’ll lead the nation to victory, or reduce us to collateral damage.

The atavistic zeal with which Boris Johnson culled his cabinet, clearing out all the remainers in the bloodiest reshuffle in modern British history, tells us all we need to know.

In 1962 Harold Macmillan chucked out seven ministers in what became known as The Night of the Long Knives. Bojo managed seventeen. Maybe historians will call it The Night of the Blond Knives.

He’s also told the European Union to get stuffed. Backstop? The buck stops here, he proclaimed.

Interesting he should plump for a quote from a former US President. The current incumbent of the Oval Office has already given him a thumping thumbs up.

“We have a really good man is going to be the prime minister of the UK now, Boris Johnson. A good man. He’s tough and he’s smart. They’re saying ‘Britain Trump’. They call him ‘Britain Trump’ and people are saying that’s a good thing. They like me over there.’

Leaving aside The Donald’s dodgy grammar, Private Eye has rather a nice take on it: The ego has landed – America plants flag on UK.

And it gets worse. The Donald’s daughter Ivanka tweeted: ‘Congratulations @BorisJohnson on becoming the next Prime Minister of the United Kingston.’ 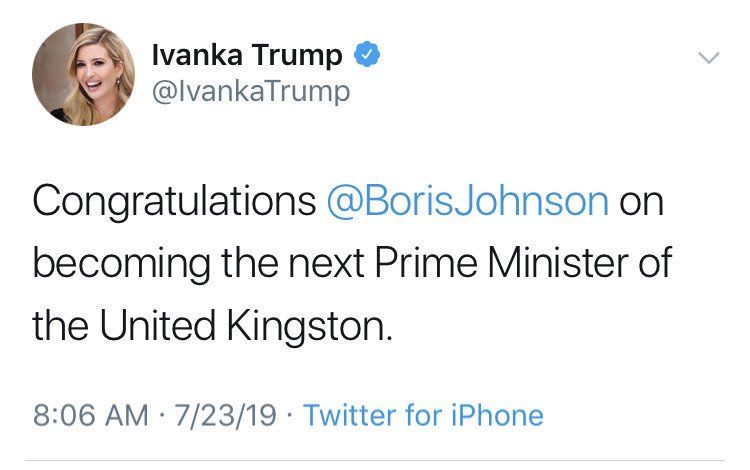 Notwithstanding which, after a cuddly little call-up from across The Pond, Boris is saying a big UK-US trade deal is in the making. On top of which, our new Prime Minister is talking of turbocharging the economy with a new high-speed rail link between Leeds and Manchester.

Well, god bless UK PLC say some, because we’re also primping the silos in readiness for a no-deal Brexit. Already there’s dark talk across the Channel of a grumpy, unforgiving cold war, with us and our so-called friends and partners barely on speaking terms.

Certainly, over here the elevation of the former Vote Leave chief Dominic Cummings, to the post of head coordinator of Brexit preparations across government dovetails with Johnson’s determination not to do any kind of deal with Johnny Foreigner.

A sensible precaution, arguably, seeing as he’s ruled out retention of the Irish backstop, designed to prevent a return to a hard border between north and south, while the European Union has set its face against forgoing it.

With an absolute sticking point as totally, sharply pointy as that, it’s clear there’s no point even trying to talk about anything.

Actually, with the commons now on its summer hols, the rest of us can be forgiven for thinking the whole ghastly business is done and dusted, or gone away, or died of boredom or whatever.

But the silence is as deceptive as it is eerie.

Behind the scenes the rustling in the undergrowth will be menacing, as our new government digs in, gearing up for war on two fronts.

With the European Union, obviously, as Whitehall and Brussels hunker down in their trenches and peer at one another through their periscopes.

But also with the currently absent MP’s of all persuasions. Bojo may have got the decisive support of that nought-point-three per cent of the electorate that constitutes the Conservative party membership, but almost half of the Tories in the commons voted for someone else.

Those who know him best love him least? Discuss.

It’s also worth remembering that the vast majority of MP’s are opposed to leaving the European Union without a deal, while polls suggest a majority of the rest of us would now rather not leave at all.

And in the upcoming by-election, in Brecon and Radnorshire, the government’s working majority in parliament will almost certainly be whittled down to almost nothing.

On top of that, the new and huge batch of ex-cabinet ministers chucked out because they’re judged flaky on Brexit will be weighing their options. Considering pressing the political nuclear button. That’s to say voting to collapse their own
government to prevent a no-deal.

Talking of nukes, Boris Johnson’s first job as Prime Minister was writing his letters of last resort for the commanders of the Trident nuclear submarines.

One wag of a commentator suggested he probably wrote one in favour of launching missiles and one against, then decided which was the more persuasive.

But the real action will come when parliament returns at the beginning of September. By that point two things will be poking everyone in the eye.

One, no-deal is a racing certainty unless they give Bojo the heave-ho.

And two, it’s now or never.

Before the house rose, Jeremy Corbyn flunked the chance to set the wheels in motion for the vote to terminate this government.

But there could still be time for another crack at it when they all come back. And the system would allow for a general election before the October 31 st departure date. Just.

If that happened the newly energised Lib Dems, under their new leader and with colours firmly nailed to the remainer mast, could make a decisive difference.

But, and this is a huge but, if Johnson somehow manages to hold off the election till after the deed is done then what will the Brexit party be for? Answer – nothing.

Meaning the eighteen per cent or so of voters currently backing it would almost certainly flip back to the Tories.

The British economy might of course be headed at that point for a long and nasty recession, but it wouldn’t have started to bite. Yet.

Bojo happy then. Everybody happy. Apart from business folk worrying about the future of their companies, employees fearful for their jobs and boring old remoaners of course.

Our new and by this point actually elected Prime Minister can wave his arms in the air and reprise Thatcher’s words after we started winning the Falklands war.

‘Just rejoice at that news’.

And he may be right. The nation could be looking forward to a glorious future of freedom and prosperity.

Then again, pigs might fly. Or Chihuahuas. Really, right now you can believe anything. It all feels like a shaggy dog story. Thinking of Boris, it looks like one too.

Boris Johnson – Dude or Dud? Let us know your thoughts in the comments section below.

The Art of Funghi, A Secret Stranger Things Event & Adventure in the East End – The Weekly EDIT