Burning Man has become one of the most iconic annual events in the American arts calendar. Each year in late August, thousands flock to Black Rock City – a temporary city erected in the Black Rock Desert of northwest Nevada, home to one of the harshest climates in the continental U.S.

Described as an experiment in community and art (but definitely not a festival!) it attracts huge numbers of like-minded souls who are generally looking for a place to escape the consumerism that dominates our lives and to express themselves through all manner of music, installations, and creative endeavors, all culminating in the traditional burning of a huge wooden sculpture of a man.

The ‘city’ is horseshoe-shaped, with radial streets that lead to the centre, to the worshipful Burning Man edifice. It’s filled with huge pieces of art and has the amenities you’d expect of civilisation such as a hospital and fire department, with the one main trapping of modern life absent – any shops to buy anything from. Here people bring gifts to share, but no money. They bring everything they need to survive and take it all home again. Black Rock City is the ultimate experiment in temporary community.

One man who is more than acquainted with this incredible temporary city is Nevada artist and Burning Man cultural co-founder Will Roger. Over the past 14 years, he’s photographed the unique, ever-changing cityscape, capturing its transformation from humble roots to the now living, breathing metropolis that supports over 70,000 citizens today.

His soon to be released book, Compass of the Ephemeral: Aerial Photography of Black Rock City through the Lens of Will Roger, contains a substantial collection of stunning, never seen before aerial photos.

As the first Director of Operations of the Burning Man event, Will worked alongside the other five founding board members and all others involved to ensure that Black Rock City becomes a reality each year and then vanishes without a trace.

He was instrumental in creating numerous foundations for the event, including establishing the Department of Public Works (DPW), a workforce of volunteers dedicated to building and deconstructing the physical infrastructure of Black Rock City; actualising an FAA approved airport (the busiest in Northern Nevada for the one week it exists), and conceiving traditions such as the Gold Spike Ceremony, a pre-event commemoration for Black rock’s builders, as the first stake is placed in the ground to survey and build the future city.

People come away with changed lives and a changed culture because at Burning Man, everyone is human… there is no class, no color. You become family: human family, world family, global family.”

Compass of the Ephemeral: Aerial Photography of Black Rock City through the Lens of Will Roger is out to buy from June 18th. 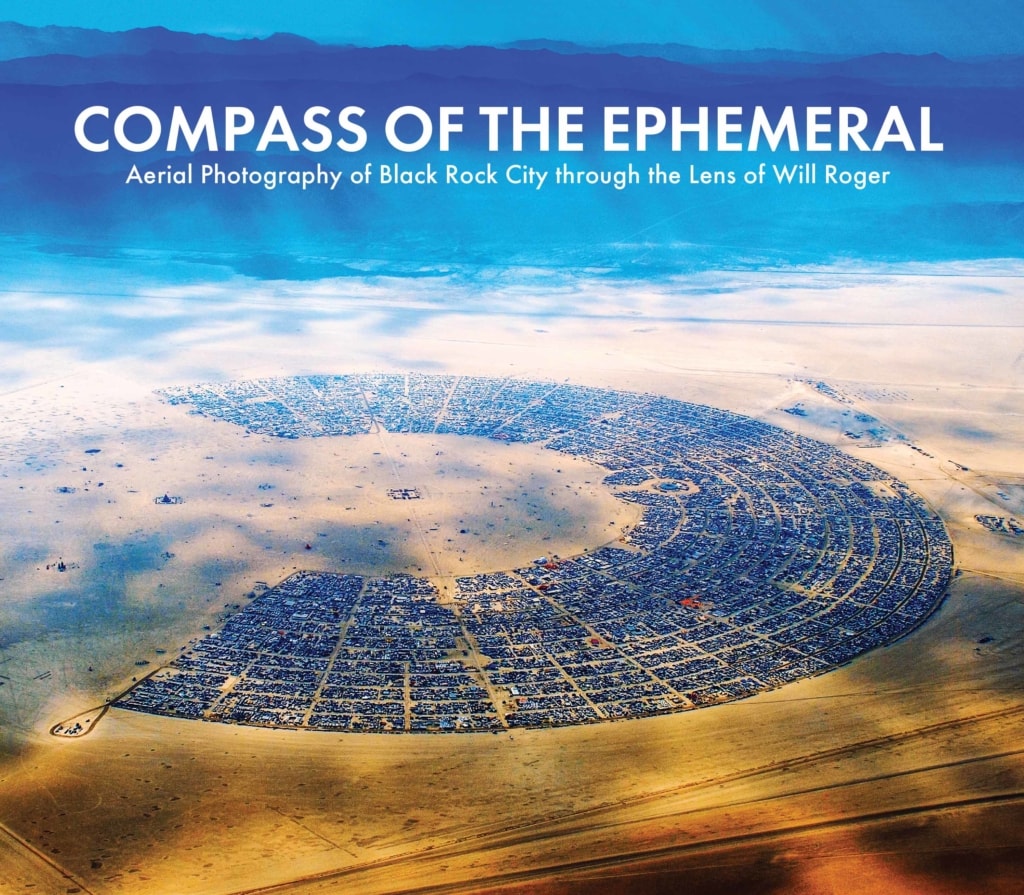