In June 1962, four men, all prisoners at the infamous and latterly defunct Alcatraz prison attempted a most daring and fantastical escape, that to this day is shrouded in mystery, conspiracy and a dose of the mythical.

Inmates Frank Morris, Allen West along with John and Clarence Anglin, after months of meticulous planning and preparation, attempted the unthinkable and presumed unassailable task of escaping the impenetrable maximum-security prison on Alcatraz Island in San Francisco.

Much is known of the plot and prep as Allen West, one of the conspirators, was unable to complete the daring mission and was left behind by the other escapees. To avoid further sentencing, West complied with the investigation and filled in the obvious gaps. 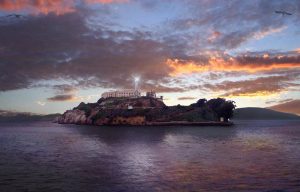 Having been incarcerated in adjacent cells, the four men almost immediately began formulating their scheme. Having previously spent time behind bars together in Atlanta, there was a mutual trust and respect, but most significantly the men utilized incredible ingenuity to make their objective a reality.

On discovering some old saw blades in the prison grounds, and having smuggled some metal spoons from the prison canteen, the men set about removing the vents from the rear of their cells.

Having somehow constructed a makeshift drill using the motor from a broken vacuum cleaner the inmates began drilling holes around the brick-sized hole that housed the ventilation grate, and in what must have been a painstaking task began to construct a hole big enough that they could slide their person through.

At the rear of the cells was an unused and crucially unguarded corridor. The men clambered onto the roof of their cellblock and set up a makeshift workshop. It was here, using anything and everything they could get their hands on, including raincoats, strips of wood, paint, rope, you name it, they managed to build life jackets and a raft.

One remarkable twist of fate and possibly the key element in the men following through with their audacious plan, was a copy of ‘Popular Mechanics’ magazine that made its way into the prison library. The magazine famed for its DIY tips and how to manuals featured an article on lifesaver jackets and was more than likely the final piece in the jigsaw.

They say you have a lot of time on your hands in the nick, and these guys certainly made the most of it, their creativity knowing no bounds. Having busted open a shaft in the ceiling of their workshop, 30 feet above the ground, but reached by climbing the network of pipes that fuelled the prison, the men also imaginatively concocted some dummy papier-mâché heads, that would serve as a silhouette during the guards nightly, routine cell checks. 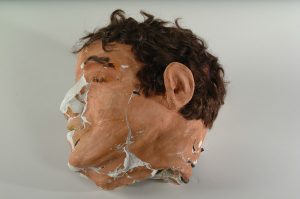 On the evening of June 11th1962, the four men made their move. Allan West was immediately left behind, he struggled to remove the ventilation grill in his cell, and by the time he did so, it was too late. 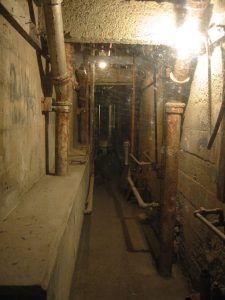 The dummy heads clearly did their job, it was the following morning before prison guards became aware of the escape plot from the rock, by which time the three men were long gone! Or were they?

The FBI’s official website accounts that although it is possible to cross the bay, “the strong winds and frigid water” made it highly unlikely.

Furthermore, according to Allen West who cooperated fully with the ensuing investigation, the plan was to steal clothing and a car once they had made land, however, no thefts were reported, and signs of such behaviour were lacking, at least according to the FBI.

Their official report stated that no raft was ever recovered and despite remnants of clothing and materials that may have made up the raft, along with a paddle and wallet wrapped in plastic, containing photos and names related to the Anglins, nothing further was found in the days following. In their minds it further reinforced the argument, the raft had sunk or been broken apart and the men had drowned.

During their seventeen-year investigation, the FBI found absolutely no evidence both in the US and overseas to suggest the three men were able to forge a new identity following the escape.

Despite the FBI suggesting that the men most likely drowned or died from hypothermia when attempting their crossing, they handed over responsibility for the case to the U.S. Marshals Service, that to this day continues its investigation. The U.S. Marshals for their part have remained active and pointed out that two out of every three bodies that go missing in the San Francisco Bay area are eventually recovered.

Many claims suggest that a cover-up took place in order to reinforce the rhetoric that Alcatraz was escape proof. Contrary to the FBI’s official report, documents were uncovered many years later that confirmed a raft was discovered on Angel Island on June 12th a day after the escape. Furthermore, a blue Chevrolet had been reported stolen the same day, a story that ran in the local newspapers.

To add weight to this remarkable twist, a motorist claims to have been run off the road on the morning of June 12th by, you guessed it, three men in a blue Chevrolet. In the days, weeks and years that followed there have been more sightings than you could shake a stick at.

Many were undoubtedly hoaxes, but within the calls and stories, was there some shreds of truth. It certainly captured the imagination of the public, and with each passing day, the story gets more remarkable and has spawned countless TV shows, documentaries, experiments and most famous of all, the Clint Eastwood feature Escape from Alcatraz.

Members of the Anglin family have for many years protested that John and Clarence were still alive. They claimed postcards, Christmas cards and flowers on Mothers Day, were all received anonymously throughout the years since the escape, and are evidence the men survived.

Robert Anglin, John and Clarence’s brother confessed on his deathbed, that he had in fact been in touch with the brothers for twenty-five years, from when they escaped up until 1987, before losing contact.

A family friend who had known the Anglin brothers since childhood Fred Brizzi, who despite being a career criminal himself and supposedly prone to stretching the truth, claims to have met up with the brothers in Rio, Brazil. He further claimed they lived on a farm and produced photographic evidence to back up his assertion. 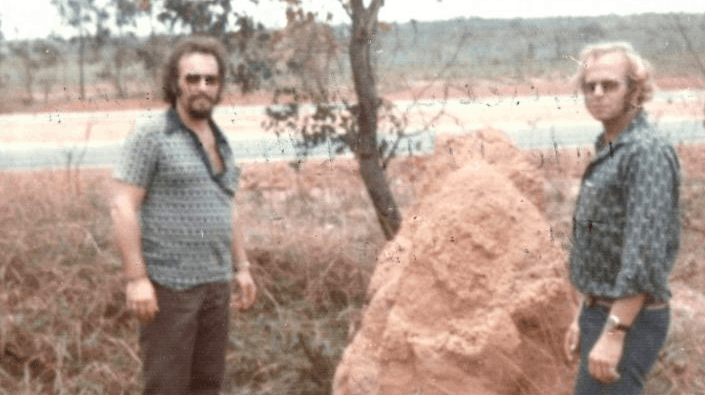 At the turn of the century, The New York Times ran an article suggesting that at least one of the Anglin brothers was residing in Brazil. Following the tip-off, U.S. Marshals headed down to Brazil, where a bartender confirmed the identity of one of the brothers, however, there was little law enforcement could do, and they regularly received calls claiming to have spotted the escapees.

Possibly the most intriguing evidence, and certainly something that captured the imagination of newspaper editors and journalists the world over, was a letter received by the San Francisco Police Department in 2013. Claiming to be penned by the hand of John Anglin the letter states that at 83 years old he is now willing to turn himself in but on one proviso, that he be given treatment for his ill health. 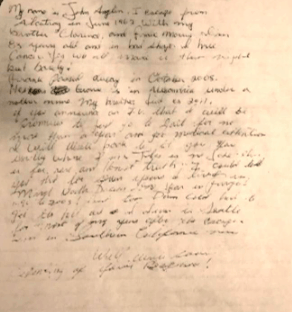 “My name is John Anglin. I escaped from Alcatraz in June 1962 with my brother Clarence and Frank Morris. I’m 83 years old and in bad shape. I have cancer. Yes, we all made it that night but barely!

Frank passed away in October 2005. His grave is in Alexandria under another name. My brother died in 2011.

If you announce on T.V. that I will be promised to first go to jail for no more than a year and get medical attention, I will write back to let you know exactly where I am. This is no joke this is for real and honest truth.”

According to a report in USA Today, the handwriting was compared to that of the three men and U.S. Marshal for northern California, Donald O’Keefe stated,

“Handwriting samples of all three escapees, John Anglin, Clarence Anglin and Frank Morris, were compared to the anonymous letter, and the results were deemed inconclusive… At this time, there are no leads stemming from the 2013 anonymous letter.”

Whatever the truth may be, these men escaped from Alcatraz using some serious ingenuity and nous, something that wouldn’t have helped very much in the modern world. They’d have been captured on CCTV about 351 times before they even launched the bloody life raft, nevermind setting up a farm in Brazil.