There are countless books, films, documentaries, opinions and anecdotes about the notorious East London gangsters Ronnie and Reggie Kray. Every man and his dog seems to have a story about The Krays, however, one man who knows the infamous brothers and their day to day activities better than most is their former South London associate Freddie Foreman.

On the one hand a typical career criminal, constantly struggling to make enough money to leave the life behind and on the other a feared enforcer who controlled large swathes of nefarious activity across the capital.

In his new book Running with the Krays, he divulges the most intimate and detailed account of the reality of life as ‘the’ go-to guy when a firm hand was needed.

Most well known for orchestrating the Shoreditch Security van heist in 1983, which stands alone as Britain’s biggest cash robbery, Foreman is a man who’s forgotten more about the workings of the London criminal underworld than most who claim to have been at the thick of it could possibly remember.

Now aged 85 and with Tom Hardy lending his hand to the foreword, Freddie Foreman’s latest recollections is a must-read memoir for real crime fans.

“You knew the Krays were going to make their mark on the world from young.” – Freddie Foreman

Born in the now gentrified South London suburb of Battersea in 1932, Freddie Foreman as with many a poverty-stricken child of the war years drifted into a life of crime through a sheer need to make ends meet.

As the congested ever busying world of London moved around him Foreman without direction saw opportunity knocking and with a sharp mind dived head first into the deep end of the gangster underworld.

“I never intended to get into crime, it just sort of happened when you were broke and one thing led to another.”

Such opportunity was found knocking at the doors of the local banks and post offices with their antiquarian safes, and Foreman exploited any weaknesses.

As the robberies continued to chalk up, including the daring gold bullion theft on May 24th 1963, the imposing presence of Freddie Foreman began to cast a shadow over the criminal landscape.

A close associate and fellow lawbreaker, Charlie Kray, was having a spot of bother with his unruly, big thinking brothers and consequently turned to Foreman to act as a mentor to these two young hotheads.

With Foreman’s connections, influence and understanding of crime he quickly became a most trusted ally to the Krays, a man who could be relied upon as they carved their way through the East End an ultimately further afield.

“I was always at the opening of any pubs or clubs and they always put me in any of the action that they had going… they needed me as an ally, to give them a bit more strength; someone to come in behind the scenes to counter punch if they needed any help. And I think I helped them get to where they did by being associated with them.”

Foreman or ‘Brown Bread Fred’ as he was known in the underworld, watched on as the audacious twins rose up through the ranks earning themselves the reputation of being the most formidable and feared gangsters in London.

That status, however, was not enough, Foreman believed there was plenty to go around for everyone, but despite this the one thing the brothers craved more than anything was celebrity and wider influence.

It was not uncommon to see the likes of Barbara Windsor or Judy Garland sharing their company in the West End, or for Tony Bennett to do a turn at one of their clubs. With every splash on the front page, the emboldened Krays became more reckless.

With the shooting of rival George Cornell in the Blind Beggar pub in front of a crowd of drinkers by Reggie, Ronnie, in turn, stabbed Jack ‘The Hat’ McVitie to death at a party surrounded by onlookers, and with blood on their hands it was Foreman the twins turned to,

“I was in bed at three o’clock in the morning. I was asleep and I got a phone call to help them out, clear up the scene afterwards.”

It was an act that would see Foreman spend ten years behind bars for his role in disposing of Jack ‘The Hat’s’ body, by which time by both Ronnie and Reggie were serving life for their string of murders.

The Krays reign had come to a murderous end, however, Foreman continued to rule the underworld. Known as the Godfather, Foreman is in many ways the last gangster standing, having outsmarted and outlived his peers.

Tom Hardy’s acclaimed performance of the villainous brothers owes much to his time spent with Forman to gain insight and inside knowledge into the nuances of their unique personalities. Freddie Foreman is no doubt the final word on the underworld.

Running with the Krays’ is out on November 2nd and you can order your copy HERE. 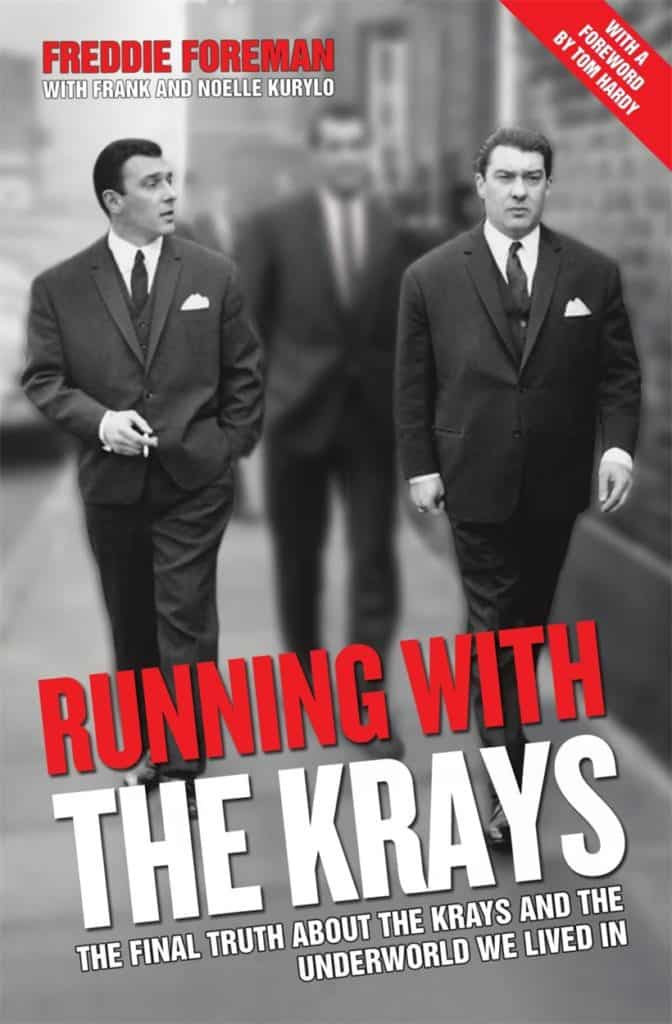