Things the Oldest People in the World Have in Common

Getting the reputation for being one of the wildest, most insane groups of men in rock history doesn’t come without leaving a trail of destruction, and like the many legends that preceded them, 80s hair metal gods Guns N’ Roses certainly can’t be accused of not doing that. Their crazy drug and alcohol-fuelled antics are the stuff of legend and it seemed trouble was never far away from Axl, Slash and co.

But what was it really like hanging out with one of the hardest partying rock bands of all time, Guns N’ Roses? We spoke to a man with first-hand experience, music journalist and author Paul Elliott. His new book The life and times of a rock n’ roll band paints the picture of the time he spent with the members of G N’ R not long before they conquered the world with their Appetite for Destruction record. He pulls back the curtain and lets us in on what they were really like way back when.

THE MALESTROM: What was it like hanging out with the band in those early days?

Paul Elliott: It was as much fun as you would imagine it to be. The first time I met the band in 1987, I was 21 and in LA for the first time – that much was exciting enough. But what I found in Guns N’ Roses was the greatest rock’ n’ roll band in the world. That much was evident when I first heard a track from Appetite For Destruction – on Slash’s Walkman (which, for younger people out there, was the original iPod).

We had just finished an interview with the whole band at my hotel room, and Slash put the headphones on me and played this one song – It’s So Easy. It blew me away. In that moment I realised that this band was the real deal. What I did not foresee was just how big they would become.

What struck me about It’s So Easy was the power in the band – the riff sounded like the Sex Pistols – and the attitude that Axl gave off in the lyrics, not least when he sang, ‘Why don’t you just… fuck off!’ And as people, I liked all of them, Izzy especially.

TM: Just how wild were they?

PE: Oh, they were wild. That much is known. They drank too much, they did hard drugs, they screwed around – all the things that rock’n’roll bands love to do. At that time in 1987, a record company insider told me this about Guns N’ Roses: “They’ll make it – if they live.” And this was not the usual music business bullshit.

This band really did live on the edge. Axl was not into heroin like some of the others. He was, I suspect, too much of a control freak even then to want to lose his mind in such an all-consuming drug. But these guys were really into the rock ’n’ roll lifestyle and that was very much a part of their whole vibe and edge.

When Kerrang! called G N’ R ‘The Most Dangerous Band In The World’, it was a measure of how dangerous these guys were to themselves. It’s really a miracle that all five original members are still alive today.

TM: What’s the craziest thing you saw in your time with them?

PE: I never saw any of them shooting up or passing out. The moment I sensed that things were getting really crazy and out of control was when they played at the LA Forum in 1991, just before the Use Your Illusion albums were released. This was the time when Axl started showing up late for shows – sometimes keeping an audience waiting for hours after the opening act, Skid Row, had finished their set.

And this was what happened at the Forum. During the wait between Skid Row finishing and Guns N’ Roses going on stage, the audience was getting ever more drunk and rowdy. I was at this show with Steve Vai, who I first met when he was the guitarist in David Lee Roth’s band. Steve said to me that he feared a riot might break out, and I agreed.

It was such a volatile atmosphere in that place. And when Guns finally came on, they opened with Perfect Crime, a really hard and fast number, and the reaction in the crowd was so intense – the threat of violence in the air. It was genuinely scary.

TM: Slash’s hardcore drinking and drug taking is well documented, did you find him an easy character to deal with?

PE: Slash was always a pleasure to be around. Still is. No matter how messed up he was, he always was polite and had good manners. Clearly he was brought up well. The only awkward moment I ever had with him was after a show in Dallas in 1988. We were at the hotel, where Duff invited myself and photographer Ian Tilton to his room for a drink.

Then Slash called and said there was a party in his room, but when we got there, he answered the door naked save for a towel wrapped around his waist, and inside his room there was a naked girl in the bed. Slash poured drinks for us all – about three measures of Jack Daniel’s straight – and we all drank them as fast as possible and got the hell out of there. It was highly embarrassing.

TM: Is it fair to say the whole band lived and breathed the rock and roll lifestyle 24/7?

PE: With the exception of Axl, yes. And of cours,e there came a point where each of the other band members had to clean up their act, either by their own will or by order from Axl. Steven Adler could not get clean, and that was the end of the band’s best years. It was never the same without him.

PE: Very exciting. At that time in the late 80s, LA really was the happening place for rock ’n’ roll, with so many bands and such a buzzing club scene. The funniest thing for me, witnessing this scene for the first time, was seeing Guns play at the Whisky, where the audience was comprised of guys and girls all with big hair and make-up. When I went for a piss during the show, it was hard to work out whether I was in the right ‘bathroom’, as our American friends call it.

TM: What set them apart from the other bands of the time?

PE: First and foremost, they had great songs. Just imagine how Nikki Sixx of Motley Crue felt the first time he heard Welcome To The Jungle – he must have known that the Guns had pissed all over the Crue. What also set the Guns apart was their authenticity. They were not big-haired posers – they were the best American hard rock band since Van Halen. And they looked so cool – cooler than any other band of the time, like a real gang.

TM: Was there a particularly magic moment for you seeing them perform?

PE: Yes, in Dallas in 1988, when they opened for Aerosmith. I never saw Led Zeppelin play live, or AC/DC with Bon Scott, or Thin Lizzy with Phil Lynott, but Guns N’ Roses in 1988 was the greatest rock show I ever saw.

It was the classic line-up, at the height of their powers, just days before Appetite went to number one in America. This was also the first time I ever saw Aerosmith, but Guns were just mind-blowing that night.

TM: Did you see the fame changing the members of the band? Obviously, none were short on confidence to start with, not least Axl…

PE: Even before they were famous, it was evident that Axl was the leader. He just had that sense of authority about him. When they hit big in 1988, the change I saw in the band was in the dynamic between Axl and the others. Backstage before the show in Dallas in ’88, I was in the dressing room with the band, all of them except Axl. Then, when Axl entered the room, he did his vocal warm-ups in a private space, enclosed by flight cases.

He sang a Queensryche song, The Needle Lies, which I took as a pointed reference to other members of the band. So it was not really fame that changed the band as I saw it – it was the culture of drugs and how Axl distanced himself from it.

TM: Where would you rank them in the pantheon of rock Gods?

PE: For me, the top echelon has The Rolling Stones, Led Zeppelin, Hendrix, Pink Floyd. The second tier has AC/DC, Thin Lizzy, Queen, Aerosmith, Deep Purple, Black Sabbath, Van Halen. I would place Guns N’ Roses just below that, alongside Metallica, Def Leppard, etc. Guns N’ Roses are one of the greatest rock ’n’ roll bands of all time, for sure.

THE MALESTROM: What will be your enduring memory of the group?

PE: There are so many. I really should write a book about it all. But there are two memories that mean something to me on a personal level. The first was from Dallas in ’88, when I met up with them at their hotel, a plush, five-star place. Izzy asked me where I was staying. I told him it was a Best Western, a cheaper joint, nearby.

Izzy said that was all wrong, that I should be in the band’s hotel, and offered to pay for my room. I declined the offer because, as I explained to him, I was unlikely to be spending much time at the other hotel. But it was a gesture that said a lot about Izzy, a good guy. It was great to meet him after he left GN’R and went solo.

The other memory was from 2004, when I went to LA to interview Velvet Revolver for MOJO magazine. I had not seen Slash or Duff for many years. Slash turned up to meet me at the Sunset Marquis hotel. I was sitting at the poolside restaurant, and when he saw me he came over and gave me a hug. In my experience it is rare for a rock star to display any kind of warmth to a journalist. This was different. 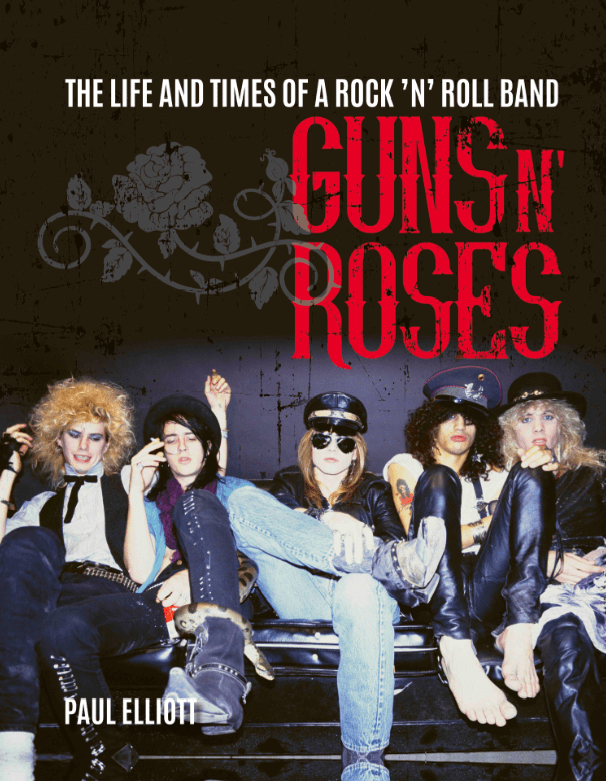