A Postcard to Nintendo

With the news that Charles Manson had passed away on Sunday evening at the age of 83, having fallen ill in prison where he was serving nine life sentences for the horrific, murderous instructions he handed out in the 1969 killing spree that shocked the world, it is hard not to think therefore about the irrepressible shadow he has cast over Hollywood and LA pop culture in general.

The most high profile of his victims was actress Sharon Tate who was heavily pregnant at the time and wife of film director Roman Polanski at her home in the Hollywood hills, a further 6 victims were brutally slain by followers in his cult family ring. But what was it about Manson that made him able to extend such influence over otherwise seemingly normal folk? After his imprisonment in 1971 his influence remarkably increased and he has become a genuine cult figure across the globe.

It has been reported that during his time inside he became the most written to inmate in US federal system history, mainly by women, one of whom a 26-year-old named Star, became his wife after they were granted a marriage license.

Pretty much every one who was anyone in Hollywood during the late sixties can recall an encounter, or reel off an anecdote about the man who became synonymous with the notion of pure evil. Indeed Michael Caine recalls being “introduced to a small scruffy man named Charlie” while attending a celeb filled party in LA, and none other than the Queen of murder mystery herself, Angela Lansbury has admitted that her daughter Deirdre Shaw had become fascinated with Manson in the sixties having fallen in with his crowd. It was also rumoured that Steve McQueen was concerned having learned of a ‘death list’ with his name on it that had been circulated among Manson followers. All typical of the bizarre circus that has always surrounded Manson. 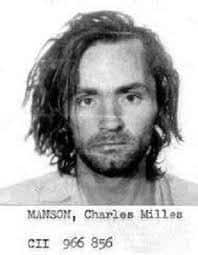 There have been a raft of documentaries and books, and furthermore TV series and films focussed on, or directly influenced by Manson. In American Horror Story: Cult he appeared as a character and new Netflix series Mindhunter makes reference to him as the holy grail of convicted serial killer interviews. Quentin Tarantino has recently been penning a script set in 1969 LA with the plot playing out against the backdrop of the family’s murders.

With TV shows, films, fashion and of course music having not escaped his impact, the small bearded hipster seemingly had a magnetic power that he was able to use

Not everyone may know that the cult leader of the Manson Family first arrived in California in 1967 with music rather than murder on his mind. He learnt guitar in prison and some of his self penned folk songs were pretty good. Neil Young for one was a fan,

Fame nearly knocked at Manson’s door after Manson’s closest brush with musical fame came after he was introduced to Beach Boy Dennis Wilson by music teacher Gary Hinman, who would later be one of the Manson family’s victims. But it all turned sinister when Wilson re-worked Manson’s song ‘Cease To Exist,’ into Beach Boys number ‘Never Learn Not To Love.’ The cult leader took offence to receiving no writing credit and ordered money and a motorbike for the song rights. What Wilson got was a bullet left on his bed, a particularly chilling warning given what was to happen over the following months.

Soon after the paranoid, delusional killer started finding what he thought were clues to an impending Apocalyptic race war in the Beatles’ White Album. He even named his murderous plan Helter Skelter in honour of the Beatles song.

Becoming a cult anti-hero figure in every sense, many famous groups have covered his songs over the years, The Lemonheads, Marilyn Manson (whose name is combination of Marilyn Monroe & Charles Manson representing good and evil) and even Guns N’ Roses. Axl even wore a t-shirt baring his face on the Use Your Illusion tour.

Nine Inch Nails’ Trent Reznor went a step further in renting 10050 Cielo Drive, scene of the Tate murders. He established a recording studio there, where he recorded the 1994 album The Downward Spiral.  The studio was called Pig, in reference to the word written in Tate’s blood on the door of the house after the murder. The cultist certainly left his mark on the darker side of pop culture. How different it all might have been if Manson had signed that illusive recording contract that so nearly came his way.

His death seems likely only to increase the myth and intrigue surrounding a man embedded in American popular culture, although it’s rarely clear why. There will always be a fascination in the macabre, especially when a charismatic figure is thrown into the mix, but his real legacy will be that of a deranged man who tried and failed to change the world through the means of murder.