Liverpool in the 1980s, Photographed by Rob Bremner

Here at The MALESTROM we’re very accustomed to delving into strange stories and off-key cases that fascinate and flummox in equal measure. This particularly bizarre story made news headlines in 2008, and to this day the real cause for the chain of incidents that took place has never been fully explained. Here’s the mysterious case of the Eriksson Twins.

In May 2008 the twins had been together in Ireland. Ursula, who lived in the States had been visiting Sabina in her then home of Mallow, County Cork. Within 24 hours of Ursua’s plane landing, they both took a ferry across the Irish Sea heading to Liverpool.

The following day on May 17th they arrived in the port city and headed straight to St Annes Street police station at around 8.30am to make a report about concerns over Sabina’s children, who had been left back in Ireland with her husband. The police promised to follow up the complaint, after which the sisters boarded a National Express coach traveling to London.

Here’s when things started to get strange. The story goes that the sisters began to display odd behaviour on the coach, they refused to check in their bags and reportedly became angry when the driver attempted to search their luggage.

On their journey to the capital, the bus made an unscheduled stop at Keele service station on the M6 motorway in North Staffordshire, where it seems the driver ordered them off the coach, although it’s said the official police report taken on what was to follow stated that they were simply feeling unwell.

The services manager at Keele also noticed that the Eriksson twins were behaving weirdly and in fear they may have been carrying explosives informed the police. After being questioned, the police found nothing obviously out of the ordinary and they were allowed to go on their way.

The sisters were next seen by CCTV, as on foot, they walked illegally along the central reservation, again officers were alerted to the scene. Before which the twins ran across the motorway causing chaos among vehicles and suffering some injuries to themselves.

Highways England Traffic Officers arrived to assess the situation. That day they were being shadowed by a camera crew from the BBC TV show Motorway Cops. The officials spoke to the twins, who at this point they seemed calm, on the hard shoulder of the motorway, as the camera crew unwittingly filmed the calm before the storm that was about to unfold.

Without warning, Ursula made a sudden dash into oncoming motorway traffic as a policeman tried in vain to stop her. She was struck by a heavy goods lorry and suffered serious leg injuries as a result. As seen on camera, only moments later Sabina followed her sister and ran into the heavy traffic. 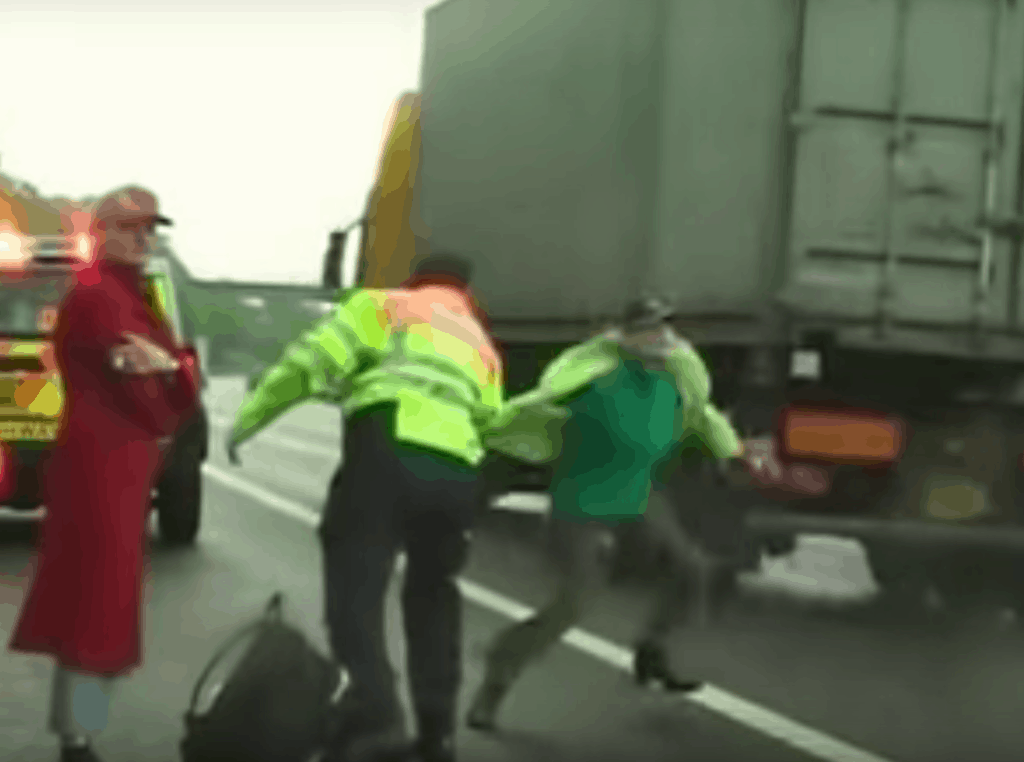 A car smashed into her sending Sabina flying through the air and causing all the traffic on that side of the motorway to come to a standstill. She was unconscious for a number of minutes, when coming to she can be heard saying “they’re going to steal your organs”, then soon after, despite the serious smash, she leapt to her feet and started tussling with a police officer, screaming, “I recognise you, you’re not real”.

She then floored the officer with a powerful punch, before jumping over the barriers of the central reservation and heading into the traffic coming at her fast from the other side.

Before being taken to hospital she continued to attack police officers. Sabina, who showed superhuman strength in her struggle, was finally restrained by six people, sedated then arrested. Both were flown by air ambulance to hospital. By some form of miracle both twins survived.

Some items left strewn on the M6 after the event were a visor belonging to Sabina which had the slogan written on it, ‘Time to Believe’. And also some broken mobile phones. A collection of mobiles were found among their possessions when they were arrested.

Here’s the footage of how things unfolded from Motorway Cops. There’s also a more substantial documentary following the events of that day called Madness in the Fast Lane.

Ursula was given emergency surgery but survived her injuries. She was sectioned under the mental health act and held for three months of assessment.

Sabina was arrested but released just days later, without having undergone a full psychiatric evaluation. Footage of Sabina in the police station shows her acting very differently than her alarming antics on the M6. She’s seen smiling and joking with officers, but says one unnerving line that would soon take on an even darker meaning,

“We say in Sweden that an accident rarely comes alone. Usually at least one more follows – maybe two”.

During her time in custody Sabina never once asks about her sister Ursula.

On release, she found herself in Stoke-On-Trent walking the streets before being kindly taken into the home of 54-year-old qualified paramedic Glen Hollinshead for the night, who saw how troubled she seemed.

At his home Sabina began displaying more bizarre behaviour. She offered Mr Hollinshead and his other house guest Peter Malloy cigarettes, before snatching them out of their mouths claiming they had been poisoned. She also looked anxiously out of the window as though someone might be following her. Malloy left for his own home that evening with Sabina staying for the night.

Early the next morning without explanation Eriksson stabbed Hollinshead five times with a butchers knife, killing him then fleeing the murder scene taking with her a hammer. She was seen hitting herself in the head on the street with a hammer. A passing motorist named Joshua Grattage stopped to try and intervene, but he was struck in the head with a roof tile for his efforts. Sabina then fled again on foot.

Paramedics were called, and gave chase, leading to Sabina jumping from a 40-foot bridge onto the A50 motorway. She broke both her ankles and suffered head trauma, but again amazingly survived the fall and found herself in hospital under arrest for murder.

Sabina Eriksson stood trial in September 2009, it was delayed due to difficulties obtaining her medical records from Sweden.

Eriksson pleaded guilty to manslaughter with diminished responsibility on September 2nd 2009. When questioned in court her only response was “no comment”.

Both the prosecution and defense claimed that Sabina was insane at the time of the killing of Mr Hollinshead, and sane at the time of her trial. Her defense counsel explained that Eriksson was a “secondary” sufferer of’ folie à deux’. A rare condition where she was being influenced by the presence, or perceived presence, of her twin sister. Ursula being the “primary” sufferer in this case.

Nottingham Crown Court accepted her plea of manslaughter on the grounds of diminished responsibility due to her mental state, the judge, Justice Saunders, determined that she had low level of culpability for her crimes. Ursula returned to Washington State in the USA without any charges. Sabina has long since been released from jail, she’s thought to have returned to Scandinavia, her current whereabouts are unknown.

So to the big question here, why? What was it that led to the chaos that day on the M6 motorway and following that an innocent man to lose his life?

This was the plea that Sabina’s legal team entered in court. A rare clinical disorder known as folie à deux, or madness of two, is a shared psychological disorder, where two (generally related) people both experience the same delusion. It would seem to be the most probable explanation here and it’s the official line on this case.

It’s been suggested by David McCann author of the book, A Madness Shared by Two, that Sabina’s partner in Ireland was part of a drug trafficking ring. He believes that authorities in the UK had the twins under observation due to links with the gang and a path as clear as possible was being made to keep them out of the legal system allowing the security services to maintain their observations.

Would the suspicious behaviour, the number of mobile phones on their person and not wanting to check their bags in on the coach that day help back up this theory? Added to the fact, despite Sabina’s actions she was detained for such a short time. it must be noted that neither of the Eriksson twins tested positive for any narcotic substances upon admission after the M6 incident.

Conspiracy site Red Ice Radio offers up the theory that the sisters could have been subject to a government mind control programme. Although many think of mind control as a half-baked conspiracy theory it’s now known that the CIA had a top-secret project running for many years that did just that. Images that worked as triggers were often implanted in subjects minds. Could the bright fluorescent jackets of the police have set something off within both twins?

Twins share a unique psychological bond that’s said to border on the telepathic. Due to twins being so close there have been many instances over time of suicide pacts, with one not wanting to be left alone if their sibling was to pass away. Had the Eriksson’s agreed on a pact between themselves? The traffic event would point to something along these lines.

Ok so we’re venturing further into the tinfoil hat realms, but with cases as strange as this its hard not to spread the net a little wider in search of an answer. Odd behaviour can easily be explained away, but both surviving multiple incidents that with any right should have left them dead is particularly strange.

The heavy lorry that struck Ursula was reported as travelling at 55mph down the motorway, a blow that would have proved fatal to most. And similar with Sabina, she was hit by a vehicle before springing to her feet to fight police and also survived a 40-foot drop onto concrete. Could the twins have been genetically superior hybrids? They’re certainly made of tough stuff.

It’s likely the real answer here will never be known. Certainly, the family of the late Mr Hollinshead have been left little comfort knowing his killer was left to walk free such a short time after the awful crime she’d committed. The case of the Eriksson twins looks destined to remain somewhat of a mystery.