Terry O’Neill: A Lifetime Behind the Lens

The Stanley Hotel in Colorado is renowned first and foremost as the place that inspired Stephen King’s terrifying novel The Shining in 1974 which was later adapted for the big screen, starring Jack Nicholson in the role of tormented writer Jack Torrance, in what is widely regarded as one of the greatest horror movies ever committed to film.

The hotel set back in the beautiful Rocky Mountain Range, was described by King after having stayed there with his family as “the perfect setting for a ghost story”. However it would seem that it’s not just the hotel’s ambiance or desolate location that make it naturally spooky, there may, in fact, be sinister forces that inhabit The Stanley, described as the most haunted hotel in the States, and there’s plenty of sources and sightings to back up the claims.

Now a thriving destination for those interested in the paranormal, a night spent in The Stanley Hotel, which first opened it’s doors to the paying public in 1909, has a habit at times of throwing up some sort of paranormal presence for its visitors. Most recently it was the visiting Mausling family who seem to have had a brush with the other side.

John Mausling, his wife Jessica their children went on the hotel’s guided spirit tour in September. They didn’t notice anything at the time but on looking back at a photograph John had taken of one of the staircases it seems a ghostly girl is in the shot and another strange apparition next to the tour guide.

John Mausling emailed The Huffington Post about the ghostly event, stating that there were no young girls in their eleven people strong tour. John said,

“At first we tried to be logical and think we somehow missed her so we asked our kids, their girlfriends and our friend if they remembered seeing a little girl,” they wrote. “Nobody did. We do not remember seeing anything on the stairs when we took the picture.”

The family are said to be non-believers in ghosts, but also open minded about things. HuffPost reached out to former FBI agent Ben Hansen to verify if the picture had been doctored in any way and was the real deal. After careful analysis of the photo his verdict was that there were no obvious signs of trickery and if it was a fake it was an extremely sophisticated one.

There was another apparent apparition captured in a photo taken of the hotel’s lobby in April last year by visitor Henry Yau, which made the news at the time.

Of course this is far from the first occasion of ghostly goings on here, the 108 year old Stanley Hotel has earned it’s reputation as a spooky hotspot with good reason and within these walls there are certain areas which appear to have more activity than others. Exhibit in chief is the famed Room 217, which was the room in which King himself stayed on the night he and his family checked into The Stanley Hotel during a snowstorm.

That night they were the only guests at the hotel, as it was set to shut down for the winter. The writer spent the night, after his son and wife had gone to bed, walking the corridors and was terrified after seeing the ghost of a maid. The spirit in question is thought to be the same one that haunts 217, the hotel’s former chief housekeeper, Elizabeth Wilson. In 1911 she entered the room to light candles, but there was a gas leak and an explosion blew up the room sending her falling through the floor into the room directly below, leaving Elizabeth alive but with badly broken ankles.

Her spirit is said to aid those staying in the room, folding clothes and tidying shoes. Even The Stanley’s sceptical manager Dave Ciani has previously gone on record saying that he’s experienced clothes being moved in his room while taking a shower. 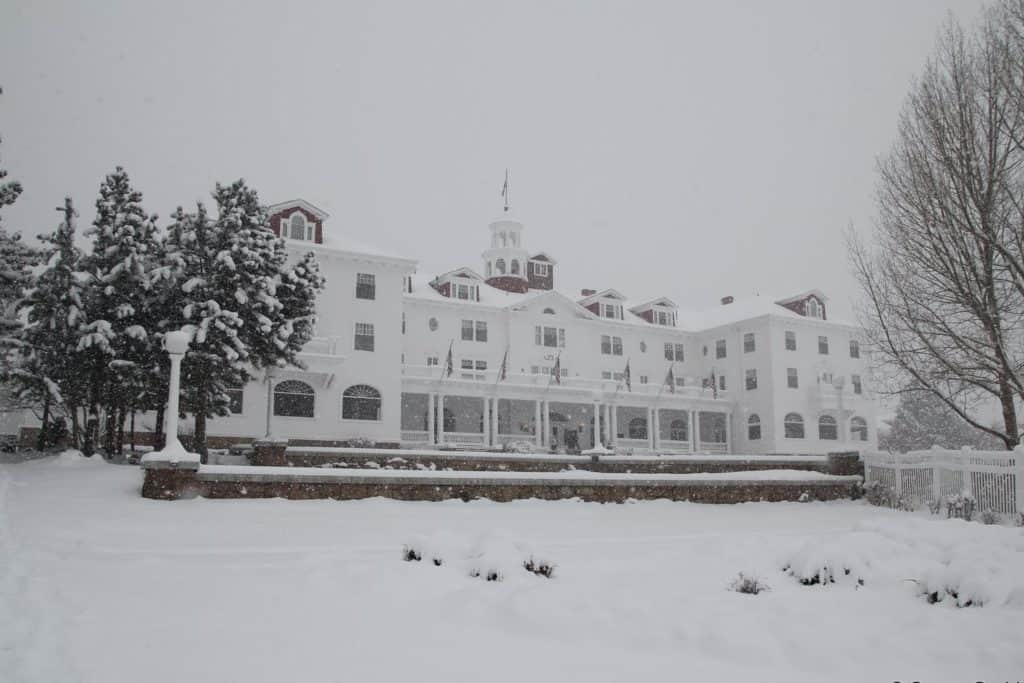 King isn’t the only famous name to stay at The Stanley. Jim Carey stayed there while filming Dumb and Dumber at the hotel, although stayed might be a stretch – he lasted only three hours in you guessed it Room 217. The comedian has never said what spooked him so much, but when it came round to shooting his scenes for the film he would only go in to complete his takes before rushing out again.

Room 217 may be the star attraction (it’s booked solid for months), but there are other areas in the hotel that go bump in the night, the Concert Hall being one of them. The most famous phantom to frequent the hall is Lucy who according to the hotel was a young runaway who had been a squatter in the basement below the hall.

When construction workers arrived one day to survey the basement she was discovered and kicked out of the hotel. That night she was found dead having frozen in sub-zero temperatures. Many of the Stanley’s staff are said to have seen her, and two years ago guest Stephanie Reidl took the photo below and put the story of her encounter on Reddit.

Everyone who took the same 8pm ghost tour as Stephanie, vouched that no little girl in a pink dress was present on that evening… or at least so they thought. She’s known to tamper with the lights, but all-in-all to be a good uplifting presence at the place. The wife of the hotel’s creator, Flora, is also said to haunt the concert hall, filling the room with the sound of her beautiful music, only for the place to be empty on closer inspection.

The slightly more malevolent ghost of Paul, a hotel worker who died in 2005 on the way to hospital after being at The Stanley, is also said to make himself known. One of his jobs was to enforce the venues 11 p.m. curfew, and shouts of “get out” have been reported of being heard.

There have been many other goings on and sightings and stories over the years, one of the most notable and reoccurring has been hotel visitors commenting on an old man in a bowler hat who works the front door, although there isn’t an old man who works the door, this is thought to be the spirit of hotel founder FO Stanley.

Could part of the strange feelings be down to the extremely high levels of quartz in the foundations below the hotel? The stone is thought to be a powerful energy conductor. Or in fact is it the 7,500 foot altitude, that’s messing with peoples heads?

Or could it be down to the fact that The Stanley is situated next to ‘Old Man’ – a sacred 5000-year-old Native American site, used by the Uto tribe for vision quests, and seen as a hallowed location for many centuries. Whatever it is at play here, The Stanley Hotel remains a source of spooky sightings and looks set to continue making headlines for it’s hauntings and high spirits.