Westworld 2, Christopher Walken, a Cage Fighter and Much More

Too T or not to T? That dear friends is the question. One answered without a doubt at The Fashion & Textile Museum in London, which is set to play host to an inspiring exhibition starting this month.

As the once humble T-Shirt takes centre stage. T-Shirt: Cult-Culture-Subversion aims to show the way the most affordable and popular garment on the planet has been used to communicate messages, express opinion, forge political unrest, but perhaps most significantly change the way we look at high-end fashion attire.

The T-Shirt has certainly been on a journey throughout the years, from its early guise as a man’s undergarment, it has been re-imagined and redeveloped to the point whereby this often taken for granted item has played a role in many of the most significant cultural changes that have taken place. 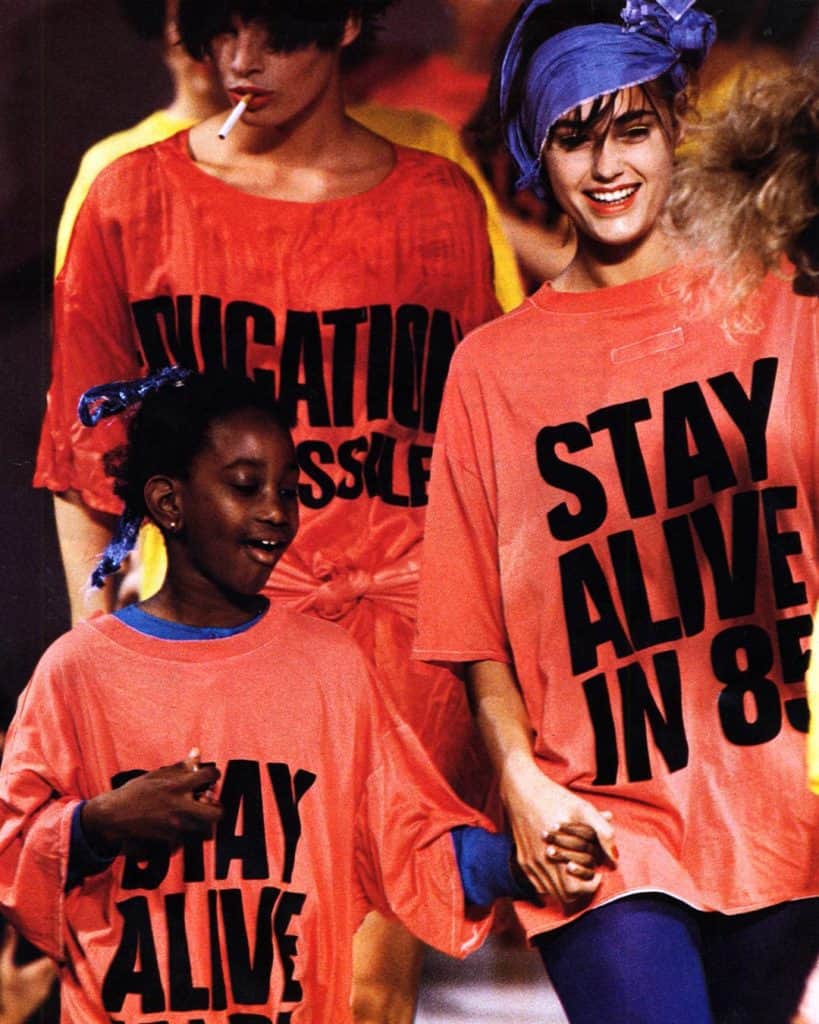 However, rather than a biographical account of the history of everyone’s go-to garment for all occasions, the exhibition will navigate a timeline of selected milestones in the life of the T-shirt.

Featuring more than 100 items spanning 50 years, the experience is laid out into twelve sections where we see its evolution from early production and design techniques to today’s wearable tech. There’s also a look at the T as a canvas for art, its place within pop culture and it’s role in subverting gender norms.

One of the most interesting areas on display is Personal Political, which explores the works of groundbreaking designers such as Katharine Hamnett and Wonder Workshop, with bold, revolutionary slogans.

This section highlights the place of the t-shirt within the hard-fought history of the LGBT+ community, forward-thinking movements, and campaigns for equal rights.

“If you want to get the message out there, you should print it in giant letters on a T-shirt.”

Other highlights include sneaking a peek at Vivian Westwood’s private collection, alongside other rare pieces from Malcolm McLaren, and modern-day re-workings of the bold 80s slogan designs by Henry Holland and Dior.

“The T-shirt has provided a canvas for politics, popular culture and art around the world – the most basic garment with the most to say. Westwood, Wonder Workshop, Hamnett and Cassette Playa amongst many others have reimagined this humble staple of the wardrobe. Completely democratic to high-end designer, t-shirts speak to everyone of us.”

The With The Band section examines those tribes who are defined by the musicians they adorn themselves with, and how the typical rock’n’roll T-shirt is now not only worn by fans but also by fashionistas

A relevant and absorbing exhibition that lays bare the nuances of mainstream popular culture and the foresight of the politically and stylistically motivated to take a simple item like the T-Shirt and turn into a vehicle for expression.

“The humble white t-shirt has come a long way since the days of Brando, Dean and Wayne. It has been controversial, sexy, political, ironic and just plain cool. Who knows where it’s going to go next?