Music Videos Don’t Get Much Better Than This: Alt-J

On June 1st 1967 one of the defining soundtracks of the 60s was released by arguably the most defining of bands to ever form, The Beatles. Tomorrow Sgt. Pepper’s Lonely Hearts Club Band celebrates it’s 50th anniversary, and 32 million sales later, amazingly it still feels just as fresh today. Any record that can usher in a ‘Summer of Love” has to be pretty special and Sgt. Pepper’s is just that.

In honour of The Beatles concept album to begin and end all concept albums, we’re going to share some facts, fiction and everything in between about a record that changed music forever.

CIRCLE OF INFLUENCE – The record was heavily influenced by the incredible Pet Sounds. Beatles producer George Martin once said if The Beach Boys had never made Pet Sounds,

“Sgt. Pepper never would have happened.”

But it’s only fair they inspired the Beatles, as Brian Wilson was in turn inspired to write Pet Sounds after listening to Rubber Soul and trying to better it, capturing the music that was in his head when stoned and making it tangible on vinyl. A perfectly formed musical circle.

TOMATOES – The song A Little Help From My Friends originally started with the lyric, “What would you do if I sang out of tune? Would you stand up and throw tomatoes at me?” Ringo who was due to sing the line said there was,

“not a chance in hell”

he’d sing the line. He apparently remembered what happened to George Harrison after he said he liked jelly babies and was pelted with them consistently on stage, funnily enough Ringo didn’t fancy the same treatment with tomatoes. 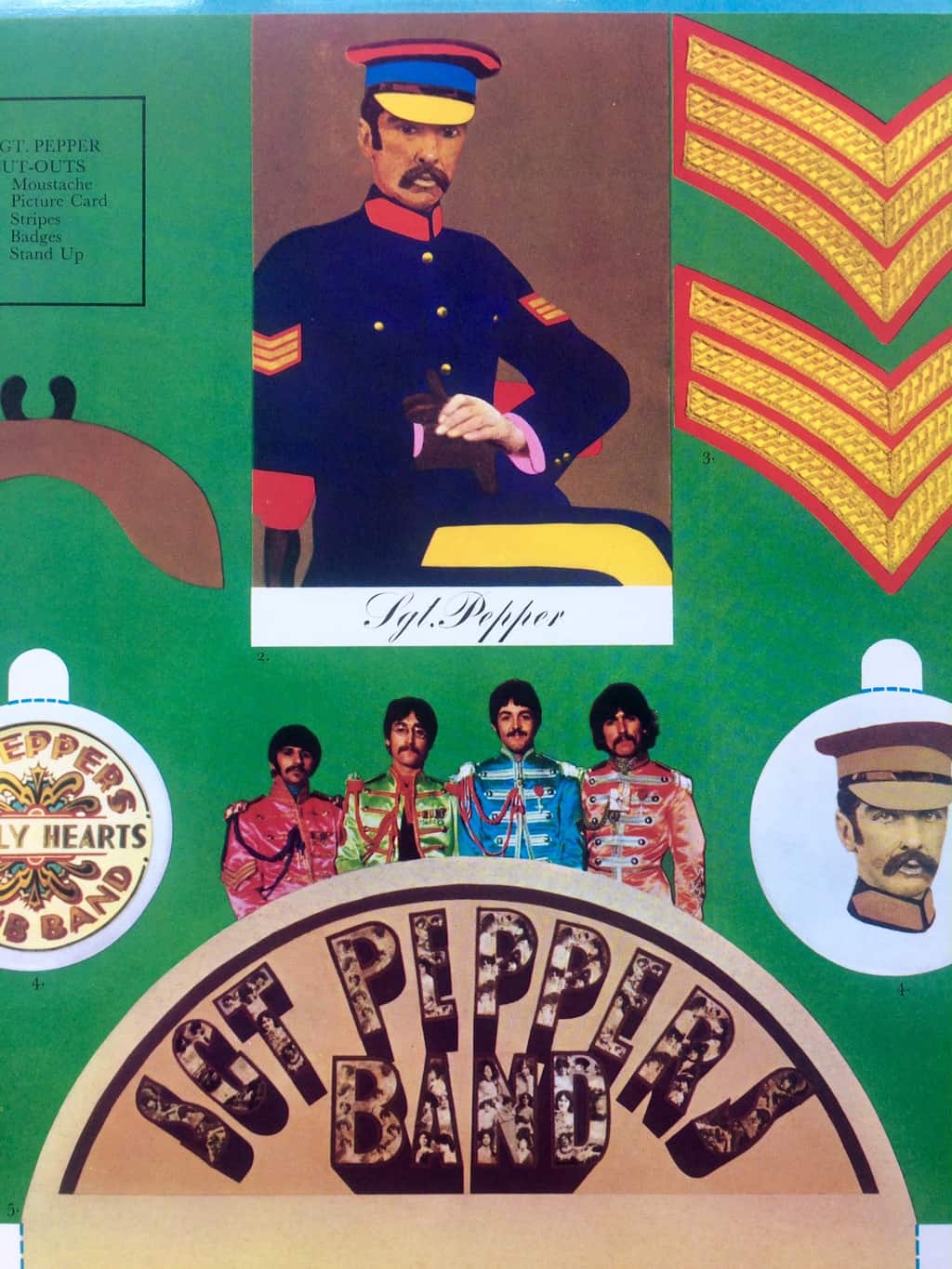 IS MACCA DEAD? – Much speculation was made of the demise of Paul McCartney after a fatal crash in 1966, which saw him replaced by an imposter named Billy Shears. While many interpreted the famous cover shot of the  Sgt. Pepper’s album as the band laying to rest their former personas of suit wearing, mop top sporting lads, some saw clear clues to the coverup of McCartney’s death.

A yellow wreath sits at the bottom right of the cover in the shape of a bass guitar. Paul McCartney played bass, there is a bass shaped wreath, a sign Macca was no more? Also a hand hovers over the picture of Paul as though a priest is blessing him before committing him to the earth. Spooky! So was Macca really replaced? Just ask yourself could an imposter come up with genius like this collab with The Frog Chorus? 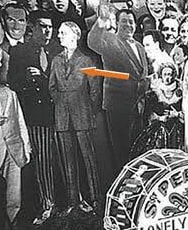 HITLER IN HIDING – Pop artists, Sir Peter Blake, and his then wife, Jann Haworth designed the album cover from an original ink drawing by McCartney. The collage includes 57 photographs and 9 waxworks mostly made up of famous faces such as Marilyn Monroe, Bob Dylan and Oscar Wilde. But one face who many may not realise resides on that famous front is … Hitler!

Well sort of at least. Lennon had requested Jesus Christ, Ghandi and Hitler to be depicted on the cover but was refused. Blake has admitted that Hitler did sort of make the cover, his cut out was in the crowd, he was just obscured by the band so can’t be seen in the final artwork. As the picture to the left shows the dictator was indeed lurking in the background.

DRUGS. WHAT DRUGS? – Given the trippy nature of the album you’d have assumed the band would have been as high as Mr Kite during its making, but it seems recording sessions for Sgt. Pepper’s were by all accounts relatively drug free, certainly of the hard kind at least. Lennon was quoted as saying,

Concerned that some of the lyrics on A Day In The Life were about drug use the BBC at the time banned the song from being played on the radio. Lucy In The Sky With Diamonds was thought to be about LSD use, but Lennon attested that he took inspiration from a painting his son Julian did of a girl in his class called Lucy O’ Donnell. The song was recorded in Abbey Road on 1 March, 1967.

Yet the first time co-writer of the song Paul took acid was on the evening of 21 March. Legend has it he and George had to coax John Lennon down from the roof of the studio after he ‘accidentally’ ingested an LSD tab. This led to Paul’s first experience with the drug. So at least John told the truth in a way, he never took the drug ‘in the studio,’ just on it’s roof.

JIMI WAS A FAN – Three days after the records release the one and only Jimi Hendrix brought his Experience to the Saville Theatre in London. He decided to open the show with his cover of Sgt Pepper’s Lonely Hearts Club Band, and did so throughout the year. All four Beatles attended the show. A nice tip of the hat from legend to legends.

There are lots of things to do in celebration of the album’s anniversary. For those in search of some Beatles history get yourself down to The Beatles Story on Liverpool’s Albert Dock, where you can cast your eyes over some very bright Sgt. Peppers costumes made by one of the original designers of the suits Noel Howard. He made the garments to the exact measurements, materials and accessories as the ones worn on the cover.

Speaking of the cover there’s also an alternative print on show taken by Sir Peter Blake where the Beatles are in different positions from the one we know and love. This widely unknown version is one of 100 prints given to top EMI execs on the records 20th anniversary in 1987.

For those with a bit of cash to splash there’s a pop up shop situated at 1 Mathew Street in Liverpool open till June 11th, selling loads of exclusive Sgt. Pepper’s merchandise and products. Bag yourself an anniversary edition of the album and many other exciting Beatles related treats. 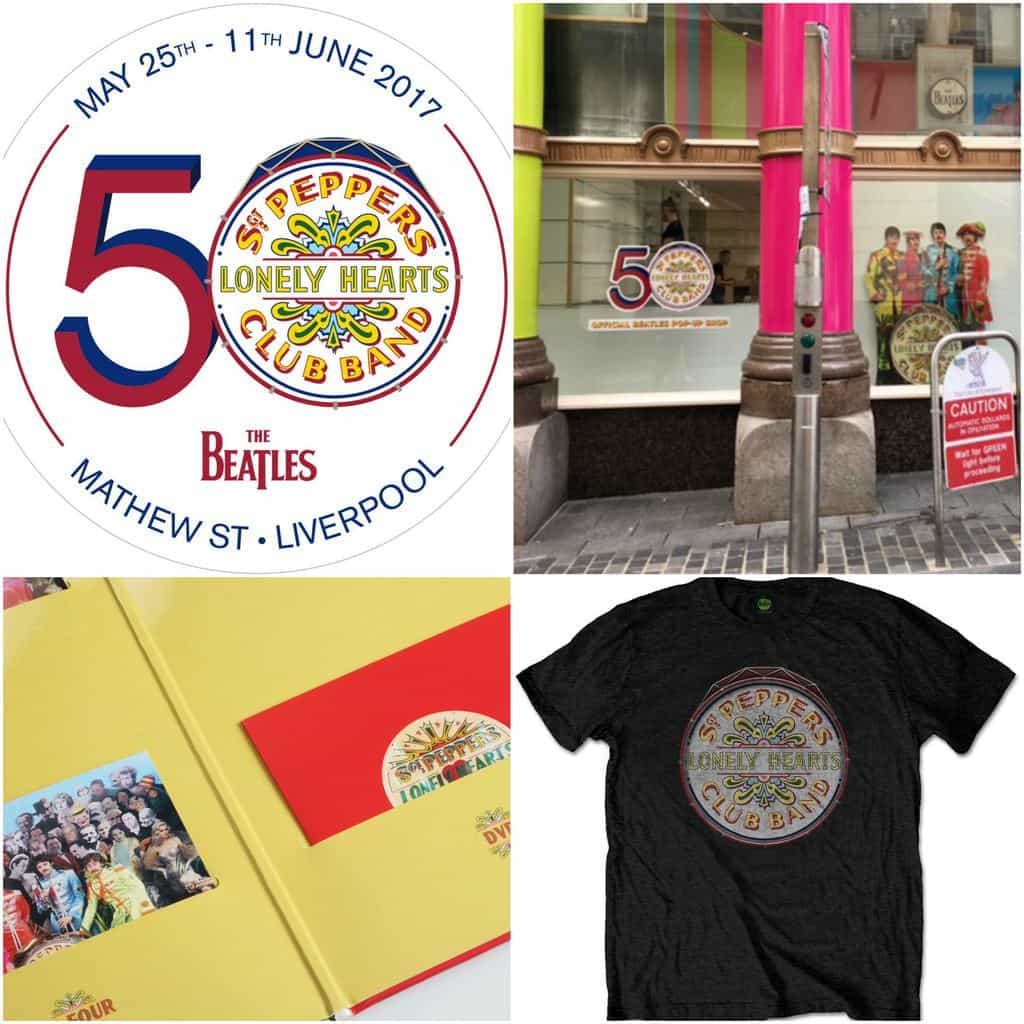 You might also want to attend one of the many events happening around Liverpool. For a full programme click here