Previously at The MALESTROM we’ve shone light on a couple of seriously spooky hotels from across the pond in the shape of the building that inspired The Shining, The Stanley Hotel, Colorado and the infamous Cecil Hotel in LA, that was said to be home to a number of ghouls and also the location where Elisa Lam was found dead in very strange circumstances. Today we’re looking to our native isles, focusing on one of the most ghostly hotels known to the long history of Great Britain, The Birkdale Palace Hotel.

The Birkdale Palace Hotel in Southport, Merseyside was a luxury hotel on the North-West coast of Lancashire. The huge 200 foot long building, opened its grand doors in 1866 and lived a very colourful life before being torn down in 1969. 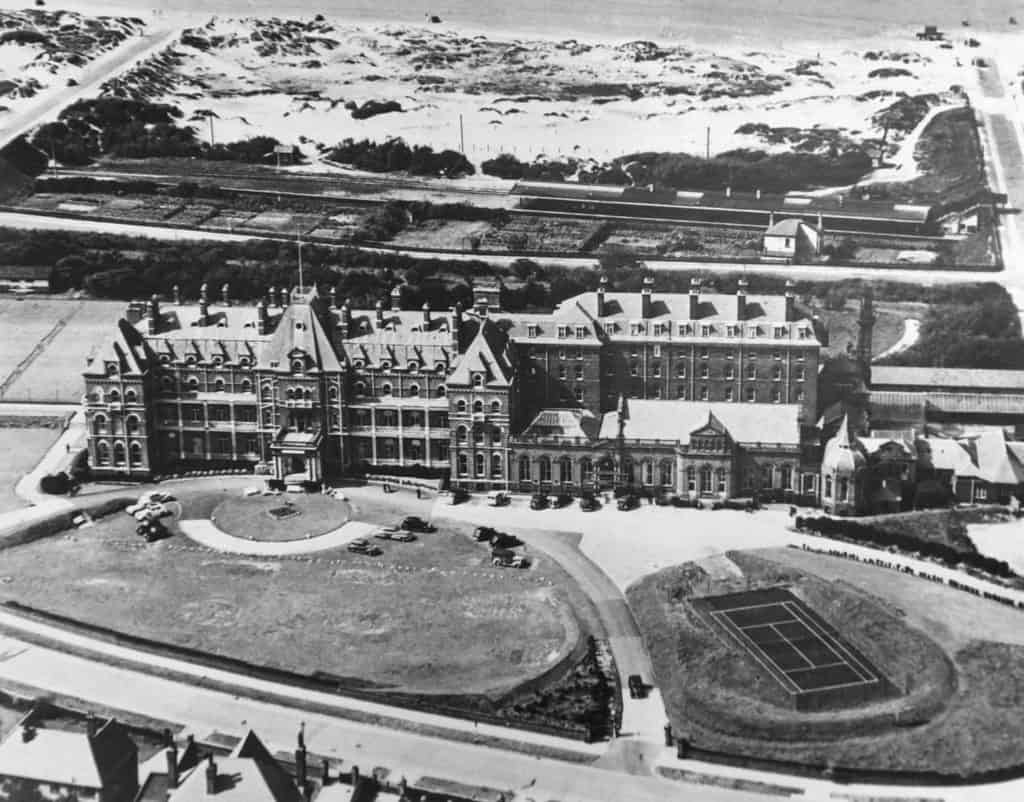 It was long rumoured in the area that the hotel was built the wrong way round by architect William Mangall. With the front of the building originally meant to face the seafront. Legend has it Mangall threw himself off the roof to his death and later haunted the lift shafts which were built on the spot where he landed (we’ll get to the lift later).

By 1919 The Palace boasted rather fancy hydropathic baths, it’s own airport, a railway station, 1000 rooms and 200 bedrooms and suites, as reported in Ram Research. Over the years the building played host to huge Hollywood stars like Frank Sinatra and Fred Astaire, Clark Gable and Judy Garland and was know for its lavish parties and functions, making full use of it’s grand ballroom and three bars. During the Second World War it was taken over by the Red Cross and became a rehabilitation centre for US airmen. It was one of the biggest centres in the country for US Air Force personnel, with more than 15,000 recuperating from active flying service there. 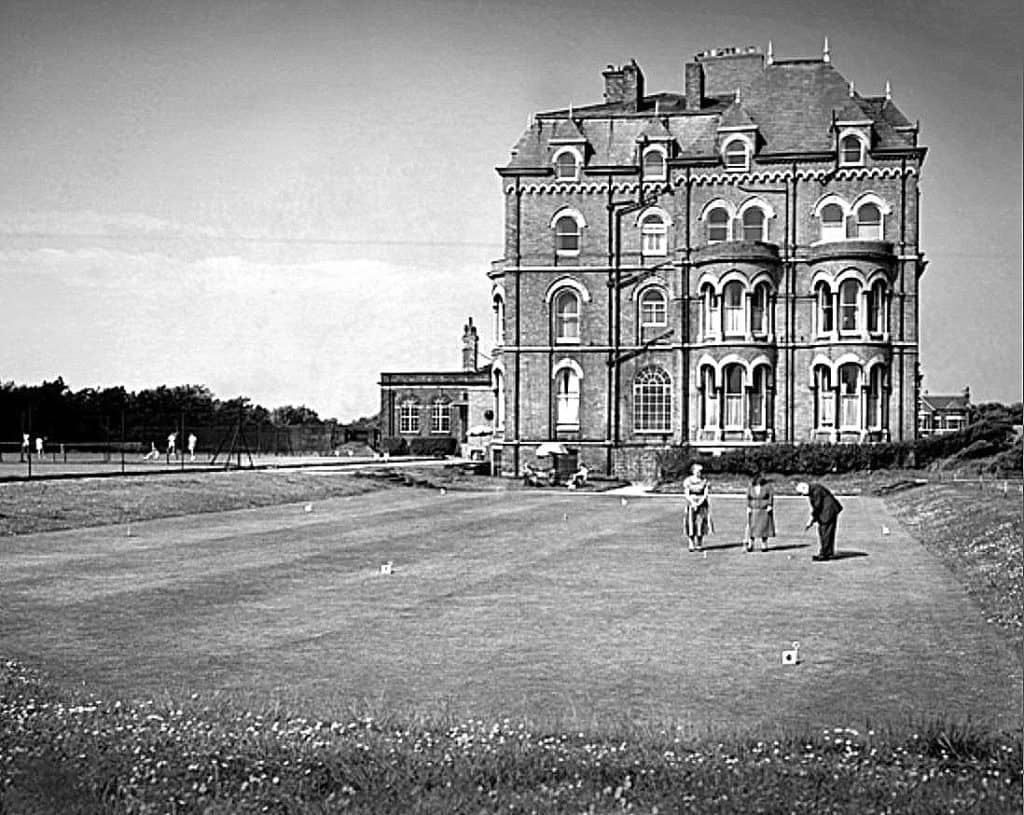 But darkness permeated the hotel’s history. It became notorious as a haunted hotel. Staff noticed an abundance of strange activity there. One receptionist who worked there in the 50s called Pauline, recalled never using the lift and never venturing around the hotel unaccompanied as she felt a sense of dread there for reasons she couldn’t explain. In 1961, there was a horribly gruesome real event that took place.

Six-year-old girl Amanda Jane Graham was abducted by a porter who worked at the hotel. Her dead body was found under his bed, she had been raped and strangled. Alan Victor Wills, who worked at the hotel as a porter, was convicted of her murder and sentenced to life in prison. Wils was 33 but said to have had a mental age closer to 11. There is also a persisting story about two sisters who carried out a suicide pact in the hotel.

Near the end of the hotel’s life in 1968/9 it was used as a film production base for Tigon Films, the horror movie company run by legendary British producer Tony Tenser who lived in the area.

Here they shot a number of films, chiefly a comedy starring Norman Wisdom, What’s Good for the Goose, and perhaps more fittingly The Haunted House of Horror, an early teen slasher movie. 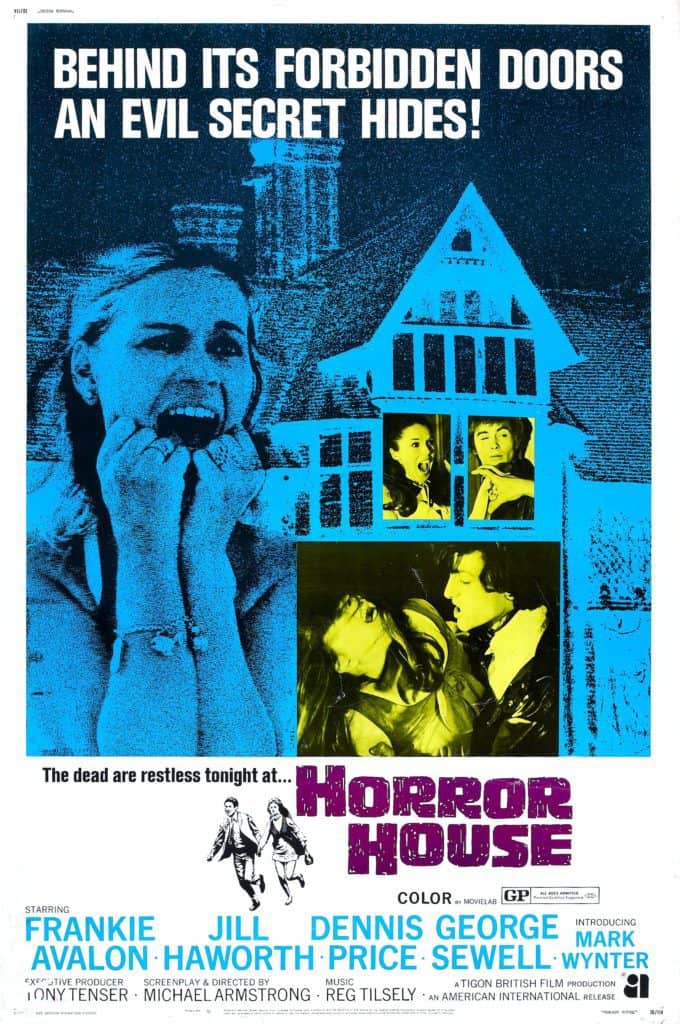 Tony tried to save the hotel, suggesting to jointly buy the empty building with Southport Council so it could be turned into a film studio, but the Council turned down the idea, as they didn’t enter into commercial partnerships. The rest then was history as the demolition began on the faded grandeur of the old hotel, which is when things got really spooky.

The demolition team experienced the strangest activity when tearing the building down in 1969. It centered around the large Victorian lift we mentioned earlier, the team cut the lift’s power and put on the brakes… yet the lift continued to move between floors. Even the emergency hand crank on the lift had been removed. The crew were puzzled. Speaking to the local newspaper the Southport Visitor in 1969, Jos Smith who was heading the demolition team, said,

“Things began to happen soon after we started the job. First we were woken up by eerie voices and other strange noises in the middle of the night, then the lift suddenly began to work by itself.”

Furthermore according to that particular report the team of workmen became so unsettled by the inexplicable goings on ‘they cut the giant lift from its holdings, but still the lift didn’t drop, the workmen hammered the top of the lift until this caused it to come crashing down from the third floor into the basement.’ It seems the lift and indeed the hotel didn’t want to go anywhere.

In fact these poor men must have thought they were losing their minds, they claimed to hear a man and a woman arguing on the top floor and when they investigated the same disruption then appeared to be coming from the reception of the hotel, even though access was restricted due to the rubble on the staircase and the fact that the handrail had been removed.

They also reported hearing stiletto heels in the lobby and as the men were staying at the hotel to save on money and with so many empty luxury spaces available, a number of them reported that they found themselves locked in their rooms by an unknown force.

The madness doesn’t end there however, the local police force received a call traced to The Palace from a distressed woman claiming to be locked in one of the rooms, however, upon arrival the local bobbies discovered the phone lines had been disabled and were no longer working.

All that remains of the Palace Hotel is the public house The Fisherman’s Rest. Which was the original coach house on Birkdale’s Weld Road. 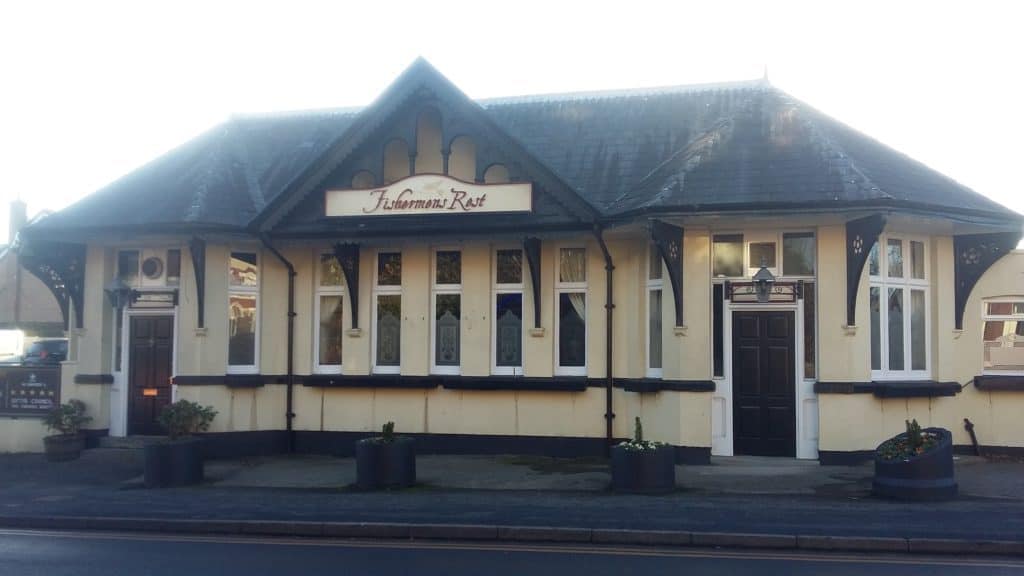 On 9 December 1886 there was a tragic lifeboat disaster and the building was used as a temporary mortuary for the bodies of 14 lifeboatmen who drowned after being launched to rescue a boat named The Mexico that had run aground in a storm. All members of their crew were rescued. The bodies of the man who’s lives were taken at sea were viewed there by the jury of the hastily-convened coroner’s inquiry held at the Palace Hotel. 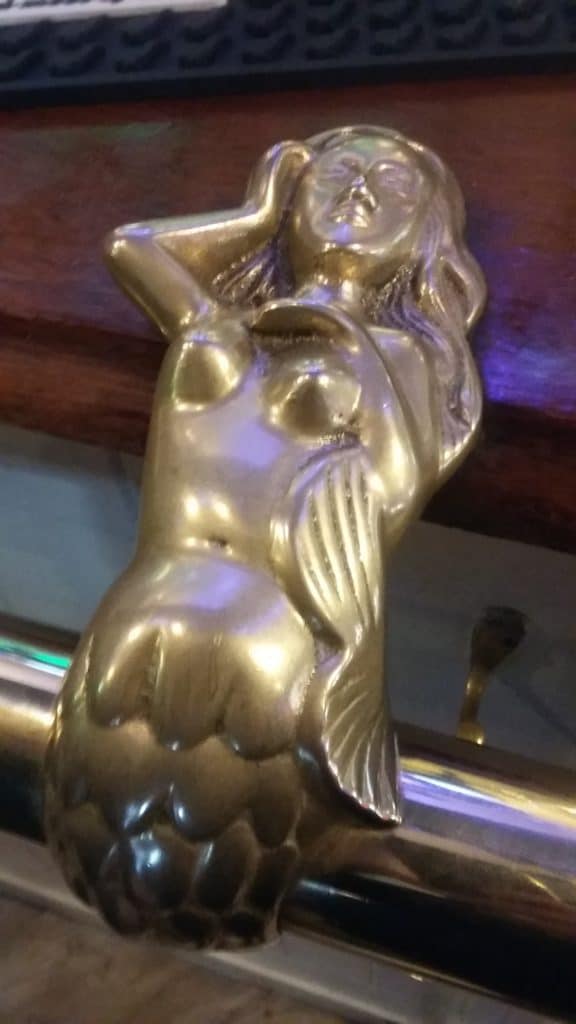 The pub is named in tribute to the brave local fishermen who gave their lives serving as volunteer lifeboatmen. Fourteen brass mermaids sit on the bar holding the handrail in place, in memory of the men who lost their lives that night. It may go someway into explaining the ghostly goings on that have been reported here. The pub is thought to be haunted, not by those fishermen, but a little girl, who its said has a penchant for moving items around at night.

Even to this day stories abound in the local area of strange goings on in the newly built properties that reside on the original land. In the 90s poltergeist activity was reported at a house on the corner of Oxford road, part of the site that was The Palace.

A family fled their home leaving all possessions behind. Something certainly spooked them. Eye witness reports from those who visited the scene said it was literally like they’d suddenly left in the middle of what they were doing at the time, with cans and a tin opener set out in the kitchen ready for cooking and other signs they’d left in a hurry.

It seems then that you can tear down and demolish old buildings, just as they did with The Birkdale Palace Hotel, but some guests only check out when they themselves are ready to leave.