Depending on your mental state at the time of viewing, some movies can stay with you for days if not weeks, and once seen their jarring imagery or disturbing plot narratives cannot be undone.

The criteria in the world of messed up movies vary from person to person, be it outright gore to mind-bending messages and of course the plain downright disturbing.

Here at The MALESTROM, we’re fans of the fictionally unfathomable and therefore have constructed a list of movies that you may well find truly nauseating to the noggin.

Surely the logical starting point in the world of movies laced with madness is. David Lynch. A man certainly known for leaving viewers of the films and TV he creates scratching their heads and often rethinking their entire existence.

Whether it be with Twin Peaks with that dwarf in the Red Room or the demented bit with the Mystery Man phone call in Mulholland Drive Lynch is all the way out there, often to fantastic effect. Inland Empire is especially odd, even by the director’s standards.

Narrative structure is thrown completely out of the window here. The ‘plot’ sees actress Laura Dern play an actress called Nikki who takes a part in a film which is a remake of a Polish melodrama. All following so far? Good, let’s press on. The film in question happens to be under a sort of gypsy curse causing Nikki to sort of get trapped in the world of her film, where her character morphs into others.

And this is where things get muddled, to put it mildly. Let’s just say over the following 180 minutes or so you get polish killers, Jeremy Irons, multiple worlds, truckloads of confusion and the highlight of it all, a sitcom with a cast made up of rabbits (who may or may not manifest into human characters in the film). Ye,s you read that right.

Ok so it’s not the best plot summary, but on watching Inland Empire you’ll see why. It’s delightfully absurd and disturbing in equal measure, Lynch could have been committed for this one.

The Lobster is a terrific film, a wonderfully written, funny yet totally bonkers story. However, as movies go it’s also a bit of a mind melter.

It’s centred around David, played superbly by Colin Farrell, who lives in a dystopian society where single people have just 45 days to find love with a partner or face being turned into an animal, of their choice we hasten to add.

Logically David has chosen to become a lobster should he fail in his quest, mainly because he’s a good swimmer. 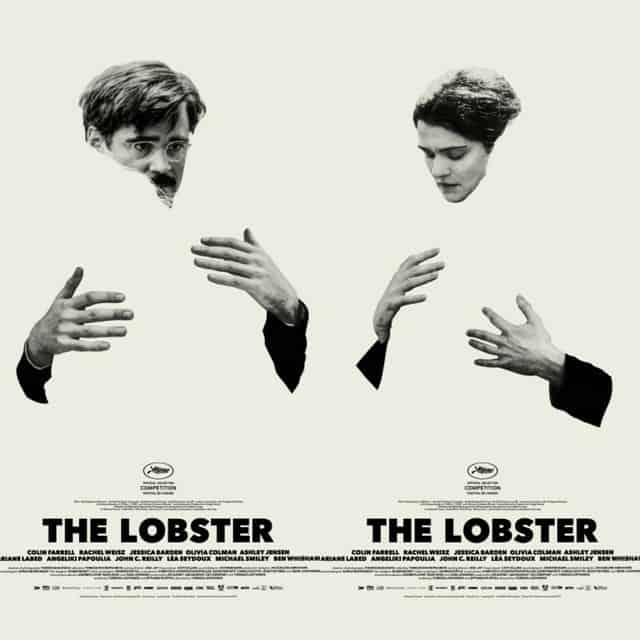 Set in a hotel for the unlucky in love, these soon to be animals must obey a strict set of rules, whilst actively seeking out a partner, from there on in it’s a weird and wonderful exploration of society’s obsession with finding ‘the one,’ the consequences of singledom – and the relationship of happiness to either.

Not to mention the role indignity plays by not following through with cultural pressures. After failed attempts at faking happiness with some of the hotel’s guests, David plots his escape, where he happens upon the loners or single people who live in the nearby forest.

There’s considerably more to this complex narrative than outlined here, and you can take from it what you will, but The Lobster is certainly a brave and leftfield movie that sees Colin Farrell deliver an understated and subtle performance while Rachel Weisz also brings her considerable acting chops to the table.

The ambiguous nature of the film is best summed up in the culminating sequence, that leaves questions and answers in equal measure. Not so much a head wrecker as a thought provoker, but one that lingers all the same.

The Japanese have managed to corner the market in crazy. Whether it be extreme TV pranks or game shows that could double as actual broadcasted torture they set the bar pretty high when it comes to mental. One of the oddest movies to come out of the country is Hausu, let’s try and boil down the plot into something that makes sense.

In short, a young girl named Gorgeous takes her friends over to her Aunt’s house for the summer holidays, which is a nice thing to do, what could go wrong? Quite a lot it turns out, the house is alive and begins to murder/eat the girls one by one, so not the best holiday. Oh and the Auntie is next level peculiar and we won’t even get into her evil Persian cat!

Yeah, it’s a bit weird, next level weird in truth, sometimes it’s a cartoon, sometimes a girl gets eaten by a grand piano. It’s a surreal, genre-defying acid trip of a movie experience that will leave any who watched it wondering if it was all a dream? It wasn’t, it happened, try to deal with it.

David Cronenberg is another director with form in the portrayal of rather skewed versions of reality. Yes, Videodrome we’re looking at you. Based on the book by William S. Boroughs, Cronenberg manages to pull off that trickiest of things, filming an unfilmable novel.

Borough’s work is a depraved, strange piece of genius that has no formal narrative structure, multiple characters, action set in cities all over the world and obscene content. Yet the aforementioned director managed to craft something, which although is demented, it’s also perfectly in keeping with the work. 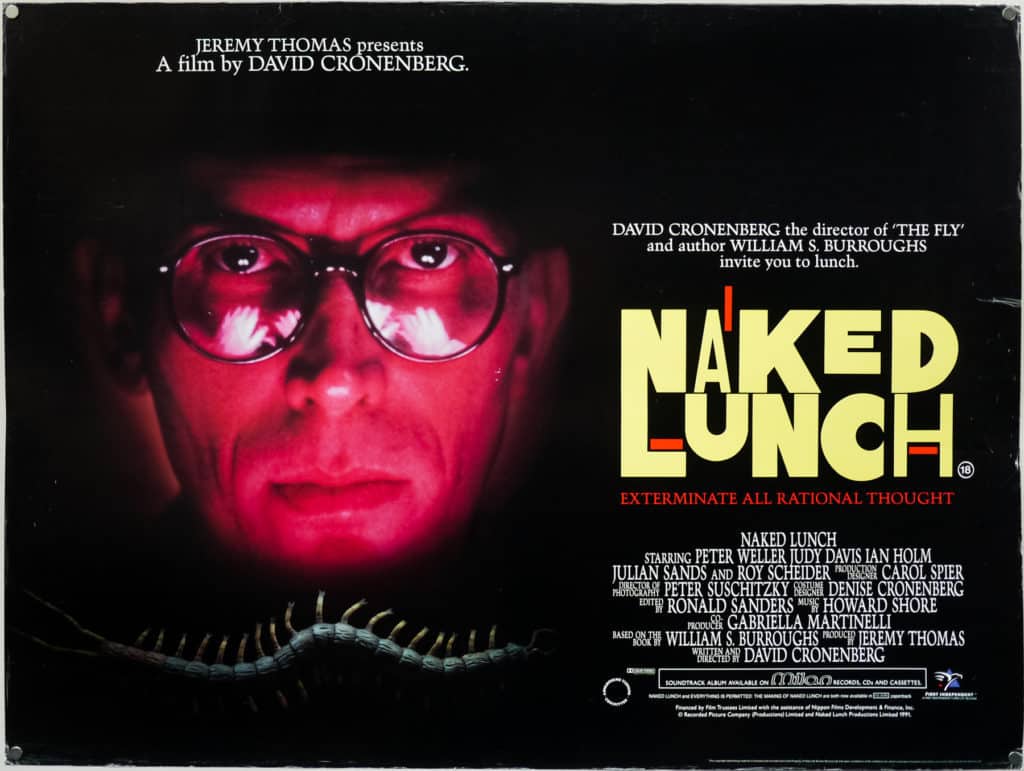 To do this Cronenberg blended real events from the author’s life with the key themes of the book. The lead character Bill is an exterminator/writer who after killing his wife while high on the substance he uses to kill insects, falls deeper into addiction and paranoia.

Cue a whole lot of heavy duty hallucinations, the phantom of his wife, typewriters that turn into giant insects with flapping anuses that give Bill orders. And there’s the ‘mugwumps’ he meets, a sort of reptilian entity that would have David Icke saying I told you so. Just like the poster says when watching Naked Lunch “exterminate all rational thought.”

It would be remiss to make a list of messed up movies and not include The Human Centipede. If ever a more disturbing storyline has been penned, it’s unlikely it made its way into production. Question marks as to the sanity and well being of writer, producer and director Tom Six aside, this film is one that (unfortunately) cannot be unseen.

Nestled in the horror[ific] genre, The Human Centipede follows the exploits of madcap German surgeon Dr Josef Heiter. Who, having drugged two young tourists seeking help following a flat tyre, are held against their will.

The crazed Doctor then proceeds to explain to his victims his truly disturbing plans to create a mouth to anus human centipede – yes for those that haven’t endured this film the title is in no way misleading.

Having added a third victim in the form of Japanese tourist Katsuro, the devilish Doctor is now primed to execute his dastardly plan. In many ways it’s a traditional horror movie, a crazed psychopath, a broken down vehicle, two young women trapped in a basement, but the visually graphic detail is genuinely disturbing and something that will stay with you in the days and weeks that follow.

Standout mind messing scenes? Far too many to mention, let’s just say to put it delicately the ‘poop’ eating sequence takes a bit of beating! Remarkably there’s both a second and third instalment to form what has to be one of cinemas most f****d up trilogies. 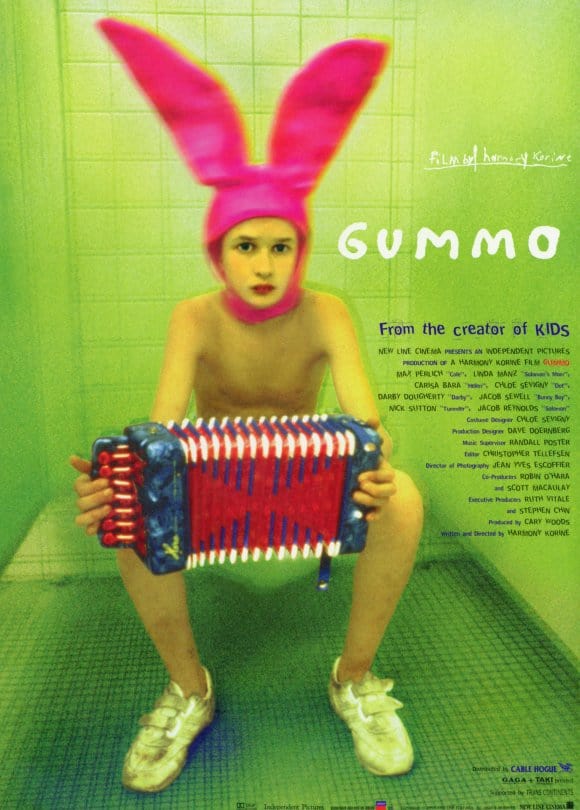 You’ll notice the word plot seems to be a dirty word in the minds of many of these film’s directors. This is firmly the case here with Hollywood bad boy Harmony Korine’s directorial debut Gummo. Less a film, more a selection of scenarios that play out in the strange, tornado-ravaged town of Xenia, Ohio. White trash kids, misfits, living in crumbling surroundings, behaving particularly badly.

A bunny eared wearing boy hunts and kill cats, a curly haired youth fights a chair in a kitchen filled with shirtless rednecks, a man tries to pimp out his mentally disabled sister, an odd looking kid eats spaghetti while getting his hair shampooed, later he works out with makeshift weights to the strains of Madonna’s Like A Prayer.

Twisted snapshots of strange young people passing time in the only ways they know how. Using mainly non-actors it blurs the lines of reality in a sometimes ugly, unsettling manner. Bleak but brilliant, this is one for the weirdos.

Last but far from least is this 1973 crazy cult classic. The Holy Mountain is a surreal fantasy, written, directed, produced, scored, and edited, and even featuring the madman who is Alejandro Jodorowsky. John Lennon, George Harrison, and Yoko Ono helped fund what is one of the most head-wreckingly brilliant films out there.

The films sees characters based on tarot cards and astrological signs set out on a journey of spiritual transformation led by an alchemist. Which sort of makes it seem vaguely normal. This to say the least is far from the case.

In preparation for starting filming, Jodorowsky went a week without any sleep with the help of a Japanese Zen master (how else?). And munched down LSD throughout the filming, helpfully furnishing the other cast members with magic mushrooms to the other actors. Who’d have known? Here’s a taste of the action, madness dial turned up to 12. Keep an eye out for the dressed up lizards.

What are the movies that have messed with your heads? Let us know in the comments below.