Contemporary popular culture is awash with let’s face it, some of the most mindblowing animated films. In fact, so much so we often take for granted the incredible levels of expert work that goes into the creation of these stunning manipulated moving images.

And of course, while on the whole, the majority are very much targeted at the younger market, many cross over with subtle adult themes and smart humour. So exactly what are the best animated movies for adults? Well here’s our two penneth. Richard Linklater’s first animated feature, filmed using a technique called rotoscope, is a meditation on the nature of reality and unreality, and if that sounds pretty heavy, well it sort of is. The film follows a nameless man (played by Wiley Wiggins), who finds himself trapped in a continuous series of waking dreams.

He walks (and also levitates!) from scene to scene listening to various scholars, artists and friends as they ponder philosophical questions such as free will and the meaning of life. Weird, rather wonderful and majorly thought-provoking throughout.

This mix of Roald Dahl’s brilliant 1970s novel and director Wes Anderson’s now trademark stop-motion animation is what you might call a winning combination. You could argue this is a film for children, it’s essentially lots of talking animals, but after watching, it’s clear this is far from what typifies a kid’s movie, especially with the barrage of adult in-jokes.

Mr Fox (voiced by George Clooney) is a loveable thief, but when he’s forced to face up to family responsibilities, he decides to attempt one more score by raiding Boggis, Bunce and Bean, the three nastiest, meanest farmers around. But as ever in life, things don’t quite go to plan and he finds himself a very wanted fox. It’s smart, witty and very rewatchable. This largely forgotten 80s animation based on the book by Raymond Briggs the creator of The Snowman is a tragic tale with a distinctly haunting quality. As James and Hilda Bloggs an elderly couple living in their small countryside idyll, become aware of the imminent nuclear threat posed by the Soviet Union and the very real prospect of an all-out nuclear war, James begins to naively prepare their cottage for the very literal fallout.

When the bomb hits the couple try and remain optimistic and live a normal life, all the while oblivious to the destruction that’s been wreaked around them. But it’s not long before they begin to suffer from the symptoms of a nuclear winter. A sublime soundtrack written by Pink Floyd’s Roger Waters and performed by the likes of David Bowie only heightens the power of some of the scenes that on the surface can seem innocuous but deliver a deep message.

The second installment of the groundbreaking Pixar Disney collaboration is considered by many to be that rarest of things in the world of film – a sequel that surpasses the original. As Woody gets damaged just as Andy sets off on cowboy camp, everyone’s favourite toy finds himself consigned to a box that’s set for a yard sale. Having been unlawfully snapped up by Al McWhiggin of Al’s Toy Barn, Woody finds himself in the perilous position of being sold off to a toy museum in Japan of all places.

What ensues is a chaotic, yet brilliantly conceived roller-coaster ride as Buzz Lightyear and his ragtag band of companions set off on an epic rescue mission. Wonderfully devised and incredibly creative despite supposed production problems, Toy Story 2 is a shining light in the juggernaut success story that is the Pixar universe. There’s an embarrassment of riches when it comes to the body of work created by Japanese animation genius Hayao Miyazaki, Howl’s Moving Castle and Princess Mononoke being two standouts. But it’s hard to look beyond the brilliant Spirited Away, the tale of 10-year-old Chihiro and her parents who stumble upon a seemingly abandoned amusement park.

After her Mum and Dad are turned into giant pigs (these things happen in Miyazaki films), Chihiro meets the mysterious Haku, who explains that the park is a resort for supernatural beings who need a break from their time spent in the earthly realm, and she’s made to work there to free herself and her parents. A genuinely enchanting, pretty much flawless animation that is deceptively dark and filled with emotional messages.

This British animation is certainly one of the most heart-tugging on this list. It follows a group of rabbits who leave their warren for a new home after young rabbit Fiver has a prophetic dream concerning an imminent threat to their survival. On their journey, all manner of obstacles and predators line their path before they can reach their final destination, a hill dubbed Watership Down.

Hard to label with the ‘kid’s film’ tag due to some undiluted violence and disturbing imagery, not to mention Art Garfunkel’s haunting ‘Bright Eyes’ theme that singlehandedly could bring a tear to the eye of the hardest of hearts. A film that’s scarred a generation, but one so effectively brought to life by a diverse range of characters. Big tick for some excellent voice work also. Fans of the work of the South Park creators Matt Stone and Trey Parker might make the argument that their 1999 film South Park: Bigger, Longer & Uncut should be one of the first names on this list, but that pales in comparison to the never more relevant Team America.

This razor-sharp satire sees a group of aggressive, xenophobic marionettes, who violently take down anyone who stands in the way of ‘world peace’. When North Korean ruler Kim Jong-il (Parker) orchestrates a global terrorist plot, it’s up to the Team America unit to stop his dastardly scheme.

It’s about as non-pc as anything you’ll see, with the film attacking right-wing extremists, the liberal leftie Hollywood elite and everyone in between. Yes the humour can be puerile and the language profane, but most jokes hit the targets hard and in the current Trump era we inhabit, unsurprisingly, it’s never been more relevant.

The far-reaching acclaim of the much heralded Akira was in large part due to its VHS release, which garnered over $80 million sales worldwide and established this groundbreaking animation as a bonafide cult classic. Set in Neo Tokyo 2019, a dystopian society rebuilt from the ashes of a Tokyo destroyed by an atomic bomb in 1988, Akira tells the story of Shōtarō Kaneda, a leader of a local biker gang whose childhood friend, Tetsuo Shima, acquires incredible telekinetic abilities after a motorcycle accident and eventually threatens an entire military complex amidst chaos and rebellion in the futuristic metropolis.

Considered the film that changed the landscape of animation, and introduced the wider world to Japanese anime, Akira’s influence can be found in comics, computer games, Hollywood movies from The Matrix to Inception and everywhere in between. Akira had such an impact on popular culture there can be little doubt regarding its status as one of the best animated movies of all time. 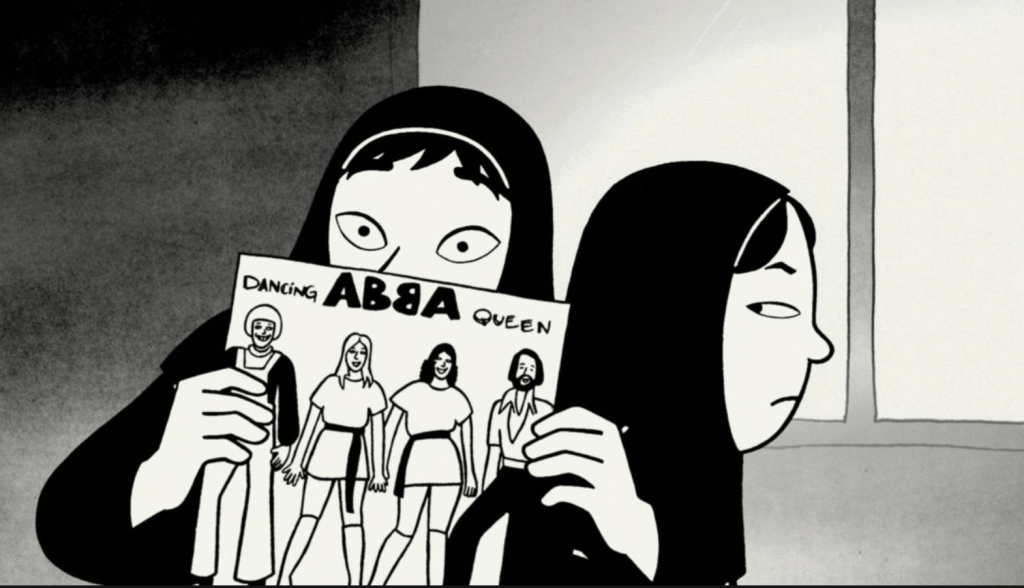 A lo-fi, mainly black and white animation may not sound like must-see viewing, but this adaptation of Marjane Satrapi’s graphic novel about growing up in Iran before, during, and after the 1979 Islamic Revolution is an absolute gem. The story of precocious Bruce Lee nut Marjane begins when she’s still a young girl in Iran.

As the revolution takes place her family are hopeful of a better life, but when religious fundamentalists take control, Marjane and her friends are forced to wear the veil, and their once social freedom is stopped. When Iran goes to war with Iraq, even worse times lie ahead. Regardless of the danger, Marjane remains an outspoken free spirit who discovers punk and continues her quest for individuality in the most challenging of circumstances. A genuine one-off and a truly exceptional animated feature.