So Stranger Things 2 has been fully binged watched and is nothing more than a distant, yet beautiful memory, but what next to consume on Netflix during these long chilly dark nights? Well here’s a few things that’ll satiate the entertainment appetite for the short term at least, until the warm glow of Christmas telly enters our lives next month.

Stephen King’s novel Gerald’s Game is widely regarded as one of his worst, in that the action feels limited in a claustrophobic way, rather than being scary like it was meant to be, thankfully the movie version of the tale doesn’t disappoint.

The plot sees Jessie (Carla Gugino) and Gerald Burlingame (Bruce Greenwood) play a married couple whose relationship needs a bit of livening up. So off they head for a remote summer retreat where they plan to spice things up with some kinky games. Jessie ends up handcuffed to the bed, but she soon makes it clear this might not be the kind of fun she’s into.

Her pleas for escape fall on deaf ears as Gerald thinks she’s playing along with the role. She ends up setting upon her man only for him to have a viagra induced fatal heart attack. Not the ideal summer holiday.

What follows ramps up the tension and suspense as Jessie has to deal with a very hungry stray dog, hallucinations dehydration, bad childhood memories, oh and a very strange man. Carla Gugino gives an impressive performance as the wife in distress here.

It’s a smart psychological horror that’s not for the faint of heart and will have anyone thinking of getting the handcuffs out making sure they keep the key close.

Gripping new drama The Sinner arrived on Netflix last week without so much as a toot on a trumpet, but they should have been screaming about it from the rooftops. It’s the latest on an ever-growing list of binge-worthy boxsets available on demand.

It stars Jessica Biel as Cora Tannetti, wife and mother to a young son who suffers from inexplicable bouts of violent rage, that culminates in a peaceful day out at the lake with her family turning into a murderous rampage, as she stabs what appears to be a complete stranger to death. Who was he? Why did she do it?

More importantly, who is Cora Tannetti? This tantalising mystery unravels as the weary, grizzled, truth searching Detective Harry Ambrose (Bill Pullman) who’s own personal life offers a worthy subplot, realises there might be more to this murder than meets the eye.

Excellently cast The Sinner has received critical acclaim from all corners and the final episode was a cable ratings smash. Probably the sleeper series of 2017, it’s a breakout performance from Biel, that really captures the attention. Netflix’s back catalogue continues to go from strength to strength and this is certainly one not to be missed. 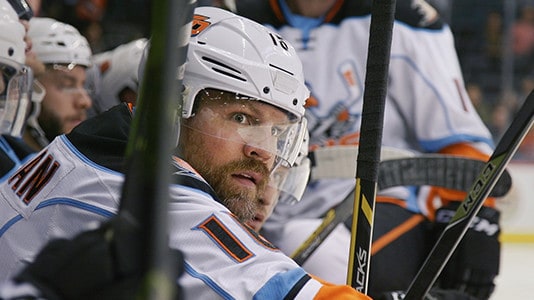 Brett Harvey’s hard hitting documentary Ice Guardians focuses on ice hockey’s enforcers. These bad boy brawlers have the toughest job in the NHL teams they bleed for. They are tasked with deterring and stopping foul play from the opposition using brute force and when things really need sorting out they drop gloves and throw fists.

Hockey greats such as Dave “The Hammer” Schultz and Dave Semenko are interviewed sharing their thoughts on this controversial role. And the documentary highlights that there’s another fight going on off the ice, as many consider the enforcer a dated element of the game and are looking to oust them.

This often emotional look at the violent side of the sport makes a compelling case for the need for fighting in the modern game. But it also shows how damaging taking on the hard man role can be, as we see the toll it’s taken on many who’ve turned the ice red.