On March 4th the biggest, glitziest award show in the world, The Oscars rolls into LA, and with headlines being dominated by #MeToo and the Weinstein scandal we can expect a very different ceremony than those that have come before it. This year marks the 90th annual Academy Awards, an event that has seen pretty much everything in it’s time from that streaker running behind David Niven, Bjork dressed as a swan and even Ellen’s internet breaking celeb selfie.

With these post-Weinstein Oscars looming large on the horizon of the Hollywood hills we can expect some very memorable moments, not to mention acceptance speeches from those showing solidarity with the #MeToo movement.

Here we take a look at the winners speeches over the years that will forever stick in our memories, each for different reasons. We’ll begin with one of the strangest.

Placed firmly in the weird corner, rather than coming in person to accept his Best Actor award for The Godfather, Brando went the slightly more unconventional route and sent Sacheen Littlefeather, President of the National Native American Affirmative Image Committee, in his place.

It was one of the first political statements made at the Oscars with Marlon wanting to highlight the misrepresentation of American Indians, it certainly wasn’t the last. Roger Moore, there to hand over the award looked slightly nervous as Littlefeather refused the statue from him, and stepped up to the podium to say,

“He (Brando) very regretfully cannot accept this very generous award and the reasons for this being are the treatment of American Indians today by the film industry.” 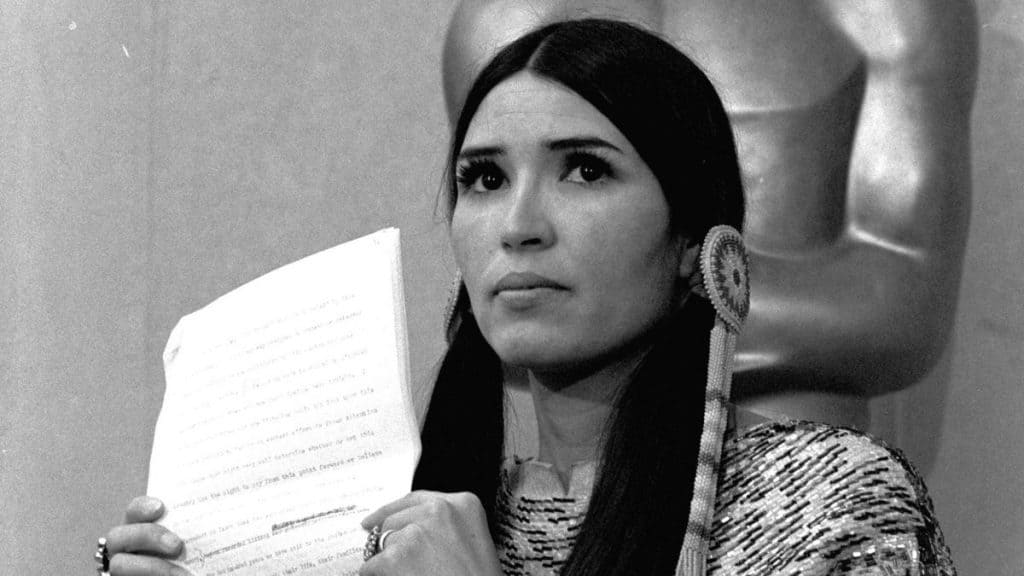 Look we’ve no problem with emotion and getting your hands on one of these golden beauties is undeniably a career-defining moment, but if there is a line to be crossed Gwyneth jumped over it and kept running.

Not only one of the worst acceptance speeches in history, it’s also one of the hardest to watch with Paltrow descending into a shaky mess the longer she thanked her way to oblivion, and as soon as she mentioned receiving,

“love of a tremendous magnitude”

From her family, she was lost in a sea of crocodile tears that filled the theatre, as the audience looked on in increasingly bemused fashion.

His long thanky speech started out normally enough by giving his appreciation to God, his mother, his family. All extremely gushy, but safe, standard Oscar speech territory none the less. But then he began to talk about who his hero was, it turns out his hero, when he was fifteen was… his twenty five-year-old self!? Yes, Matthew McConaughey’s hero is Matthew McConaughey. It gets even weirder when he says at age twenty-five,

“My hero is me at thirty-five.”

It turns out he’s always “chasing” his hero self that’s ten years away, which sounds like a terrible pitch for a sequel to Looper. Entertainingly odd.

This one will forever be sat very near the top of the wonderful category. Grizzled 73-year-old western veteran Jack Palance sauntered up to the stage and opened up with a line ribbing that year’s Oscars host and his City Slickers co-star Billy Crystal,

“Billy Crystal… I crap bigger than him.”

He then wowed the crowd with some one armed press ups to show how spritely he still was. One of the most memorable of all time without any doubt.

Jerry Maguire proved what a live wire Cuba Gooding Jr could be and he continued in the same vein when receiving his Best Supporting Oscar for his performance. Barely able to pour his words out he babbled on doling out thanks to everyone he’d ever met while gesticulating wildly with his arms. And then awkwardly music began to play him off stage, but valiantly he continued on expressing his love to all, especially his co-star,

To be fair Cuba was probably given a record breakingly short time on the mic for one of the top prizes, but still, know when to walk away mate.

One of the most wonderful wins was by 44-year-old Hattie McDaniel. Hattie broke new ground becoming the first black Oscar winner at the 12th Academy Awards for her portrayal of Mammy, Scarlett O’Hara’s eye rolling maid in Gone With the Wind. She told the gathered audience at the Cocoanut Grove Nightclub,

“I sincerely hope I shall always be a credit to my race and to the motion picture industry.”

Before her and Brad were together and then not together, Angelina got tongues wagging over another fella even closer to home, that being her brother! After sharing a kiss with him on the red carpet of that year’s awards, in a manner you really shouldn’t with a sibling, she went on to win the statue for Best Supporting Actress and then on the podium professed,

“I’m so in love with my brother right now.”

Which would still have sounded wrong, but factor in the earlier smooch and you’ve got all kinds of wrong.

This one is wonderful yet feels quite strange, mainly because we get to hear the greatest of all silent stars speak. The legendary performer was graced with a 12-minute standing ovation (all of which wasn’t caught on camera) from the audience. It marked his return to America after a twenty year politically imposed exile from the U.S. for alleged communist sympathies. In his short but extremely emotional speech he said,

“Words seem so futile… so feeble. I can only thank you for the honour of inviting me here.”

Then, ever the crowd-pleaser he got out his trademark bowler hat and cane. A very special Oscars moment.