Here at The MALESTROM HQ, we love a good action film, cue token tough guy running amok, preventing a major disaster, taking on ruthless terrorists or halting a plot for world domination. Think Arnie in Commando, John Rambo in a tight vest and Bruce Willis clambering up an elevator shaft.

And while these genuine tough guys are a part of the furniture in tinsel town, what about those characters that are seriously tough, yet you probably wouldn’t pick them out of a crowd. You know the ones – they could be small, unassuming, scruffy, thoughtful, unlikely to be voted ‘most likely to …..’. Well, we thought we’d bring you an alternative guide to some of film’s most dangerous, toughest characters who would probably go unnoticed in the corner of a busy bar. 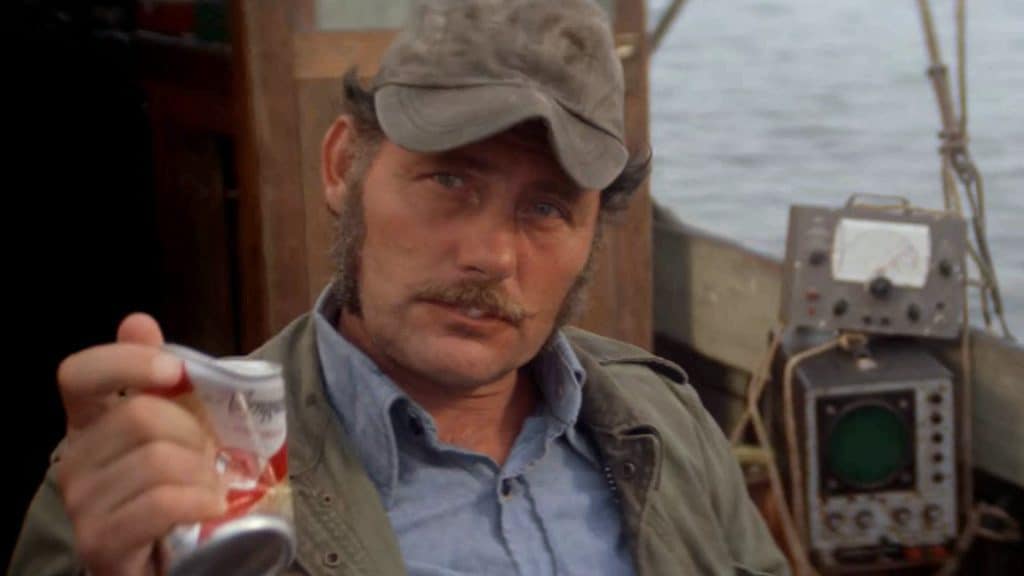 It doesn’t bear thinking about the fact that Steven Spielberg had initially earmarked tough guy Lee Marvin to play the role of everyone’s favourite fisherman ‘Quint’. Robert Shaw was so compelling in his role as the unhinged, beer-swilling veteran of the ocean that he steals almost every scene. Tough as old boots and with hands that could crush a melon, Quint is certainly one of the toughest characters ever captured on celluloid.

Brody (Rob Schneider) and Hooper (Richard Dreyfuss) sum up the unstable, uncompromising nature of Quint’s personality with their own fidgety, nervous performances. A US Navy veteran, Quint was a survivor of the USS Indianapolis where hundreds of crewmen lost their lives in shark infested waters, but not our big fish hunting anti-hero Quint. He survived and his story leads to ‘that’ famous monologue, which is surely one of the most mesmerising scenes in film history.

As the story goes, Robert Shaw adapted the ‘method’ approach to perfecting his character and on set made Dreyfuss’ life a living hell, constantly baiting and challenging the young actor.

“Y’all know me. Know how I earn a livin’. I’ll catch this bird for you, but it ain’t gonna be easy. Bad fish. Not like going down the pond chasin’ bluegills and tommycods. This shark, swallow you whole. Little shakin’, little tenderizin’, an’ down you go. And we gotta do it quick, that’ll bring back your tourists, put all your businesses on a payin’ basis. But it’s not gonna be pleasant. I value my neck a lot more than three thousand bucks, chief. I’ll find him for three, but I’ll catch him, and kill him, for ten.” 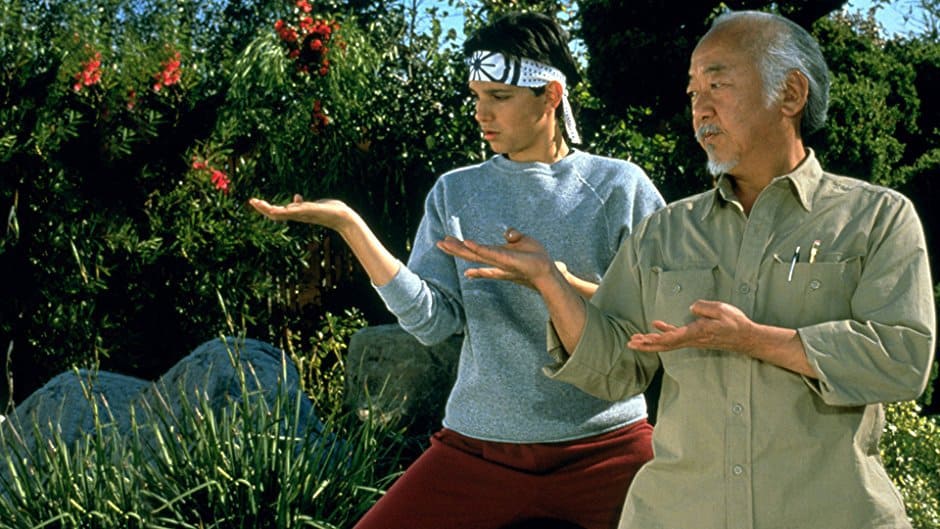 Softly spoken, unassuming war veteran Mr. Miyagi, a Medal of Honour recipient from his time in the 442nd Regimental Combat Team in World War II, is one tough little dude. The son of a fisherman from Okinawa, from whom he learned his deadly Goju Ryu Karate-Do, Miyagi gives major credence to the phrase ‘it’s the quiet ones you gotta watch’.

Taking bullied teenager Daniel LaRusso under his wing, he slowly, very slowly, teaches him the ancient art of karate, although Daniel doesn’t realise it at the time. His tough guy persona is first realised when skeleton costume wearing bullies round on Daniel at the school Halloween party, Miyagi just happens to be on hand to whoop some ass.

His unwavering self-assurance is exemplified when Karate school kingpin John Kreese belittles both Daniel and Miyagi at his dojo, he get’s his comeuppance at the beginning of Karate Kid 2. And the best part, the little man doesn’t even need to lift a fist. 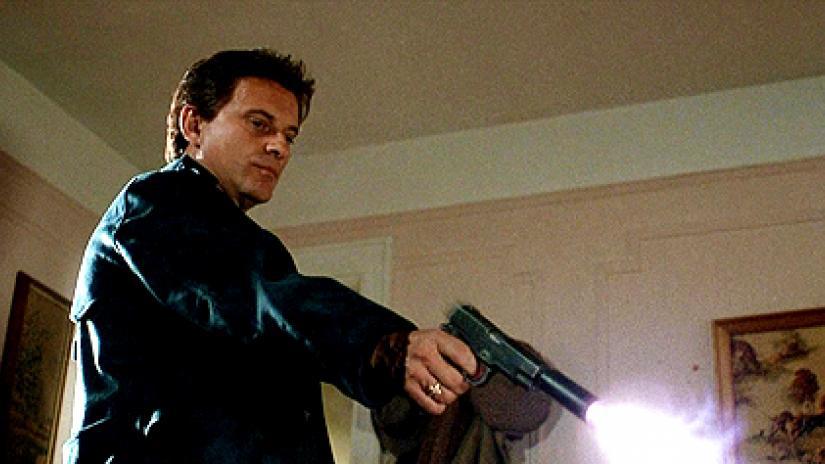 He may be one of the smallest on the list but with Tommy DeVito never has the old adage been truer, that it’s not the size of the dog in the fight, it’s the size of the fight in the dog. And Tommy has some fight, usually brutally violent in manner.

He’s also a tough talker with an underlying air of menace that despite his diminutive stature would make any potential wiseguys think twice about messing with him, he’s definitely the number one character on this list that you’d want to p**s off the very least.

As the likes of young mob runner Spider found out, taking a bullet to the foot for his troubles and to an even greater extent Billy Batts when he told him to shine his shoes, big mistake Billy! To say you’d be on tenterhooks on a night out with Tommy would be like saying Tommy’s mama cooks good pasta meatballs (oh yeah safer not to talk about Mrs. Devito’s cooking, to be honest).

Capable of starting a fight in an empty room, old Tommy here is a bonafide nutjob.

“What do you mean funny? Funny how?” 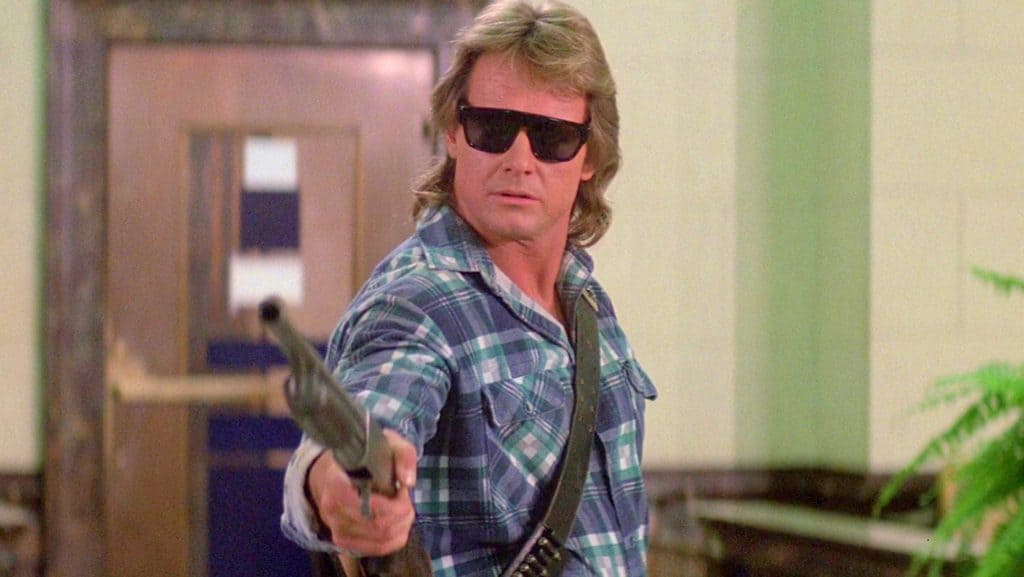 Late great professional wrestler Roddy Piper was a legit tough guy in the real world and it turns out a perfect fit for grappling fan John Carpenter’s sci-fi cult classic They Live. His natural charisma and commanding physical presence made his transition to action star a fairly seamless one.

He plays a drifter that discovers the poor are getting poorer and the rich richer due to aliens infiltrating American society disguised as the wealthy, luckily Roddy happens across some special sunglasses that reveal their true forms so he can start taking some direct action. The movie is known for having one of the longest fight scenes in film at nearly six minutes, Roddy’s scrap with Keith David took a month and a half to rehearse.

It’s pretty brutal from start to finish with Piper utilising some nasty wrestling moves along the way.

“I’ve come here to kick ass and chew bubblegum… and I’m all out of bubblegum.”

Wandering crocodile hunter Mick Dundee makes Bear Grylls look like a scout leader and that’s not just down to the size of his knife. This antipodean charmer is about as unflappable as humanly possible and has the skills to be pretty deadly when he needs to be.

After saving a journalist who’s come from America to write a feature on him from the jaws of a hungry crocodile, Mick becomes a fish out of water when she takes him back to New York with her.

The Big Apple is filled with plenty of bad dudes but Dundee takes them all in his stride, whether it be muggers who can’t compete with his machete or pimps that need to be played, none of them is a match for the leather-skinned Aussie with a dangerous glint in his eye.

As badass ageing action characters go Sean Connery’s portrayal of John Mason in The Rock is up near the top of the list in terms of toughest. With his top-level British special forces training and debonair quips, he’s essentially Bond in his twilight years.

As the only man ever to escape Alcatraz he’s let out of longterm lockdown by the FBI, to buddy up with scientist Nic Cage and help stop a group of ex-marines who are using the prison as a base to unleash chemical weapons on San Francisco.

Luckily Mason is not a man to take prisoners as he displays the agility of a cat blasting and battling his way around Alcatraz on the way to saving the city. Not bad for an old fella.

“I’m fed up saving your ass. I’m amazed you ever got past puberty.” 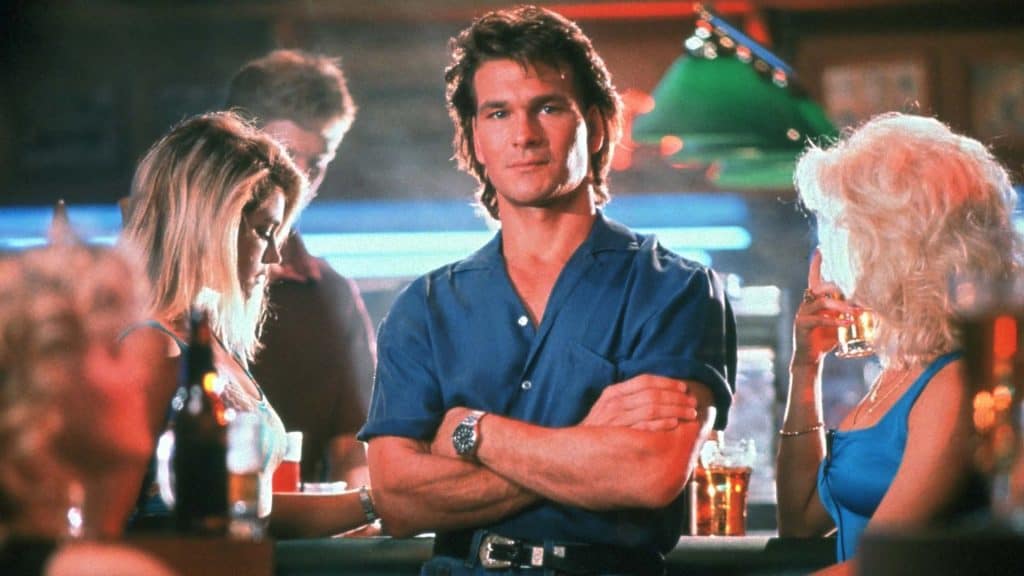 If Dirty Dancing showed us anything, it’s that Swayze can move those hips with the best of them but we didn’t know he could also swivel them and throw some sweet kicks. In the so bad it’s brilliant Road House he plays ‘cooler’ James Dalton, who is essentially a specialist bouncer with a mysterious past and of course lovely hair.

He’s hired to clean up trouble in a rowdy roadside bar called “Double Deuce” which he does, but it only leads to more trouble for Dalton to deal with, all culminating in an end boss fight where a shirtless oiled up Swayze rips the bad guys throat out (yes you read that right) then spin kicks his body into a lake.

Not quite sure if he’d have the same impact in a rough as they come bar in the North of England, but it’s 80s movie violence perfection all the same. 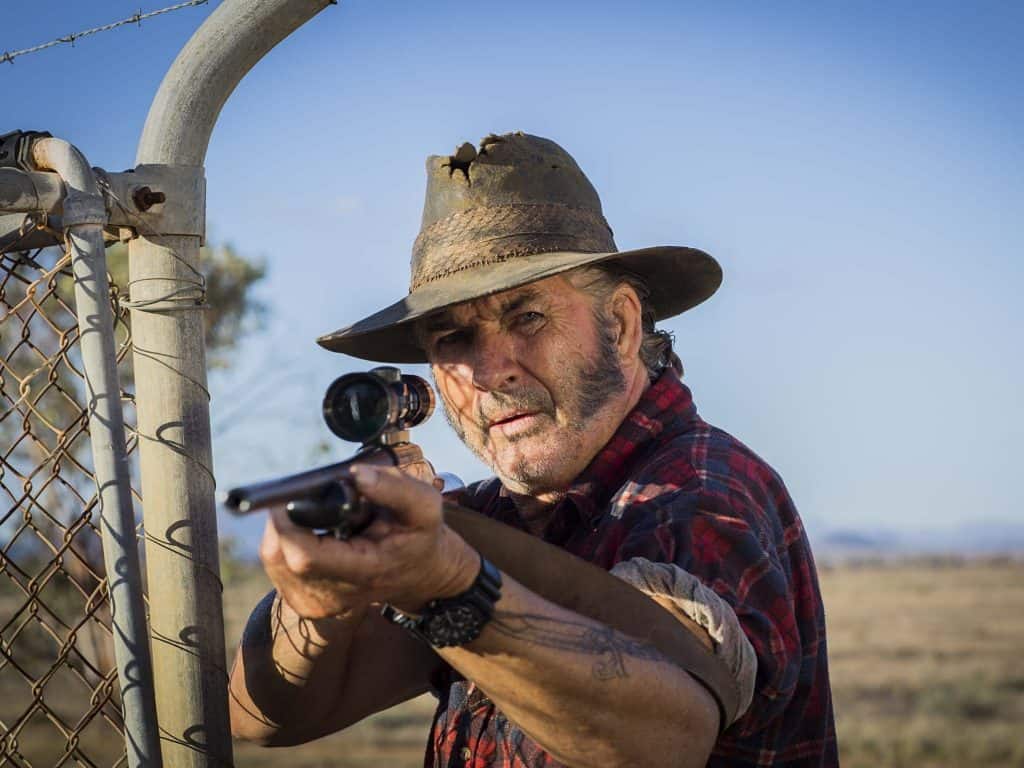 The second Aussie Mick on the list is not a guy you’d want to run into down a brightly lit alleyway, Mick Taylor is one tough nasty bastard. His unassuming, backward bush man routine is but a mere foil for his grizzly, psychopathic alter ego, who despite carrying around a rather portly frame manages to survive being shot with a rifle through the neck before proceeding to use all of his old man strength when dealing with his attempting escapees.

Much like Tommy DeVito, Mick is the kind of guy you wouldn’t want to find yourself sharing a few drinks with – serial killer tendencies aside – his glassy-eyed veneer is deeply unsettling and is certainly the kind of guy that after a couple of beers might decide he doesn’t really like you.

Joe Jarratt reportedly took the fear-inducing nature of his role into real life when attempting to get a tenant evicted from a property, he left an answer phone message straight from Mick Taylor himself.

This 80s comedy about two old-school gangsters released into a very different LA than they know after 30 years behind bars features two screen icons in Kirk Douglas and Burt Lancaster. But it’s Michael’s dad who’s the real tough guy in the title here, at the age of 70 Kurt’s character Archie Long is in ridiculous shape (check out the crazy skipping rope routine) and is as threatening as someone half his age.

At one point the two veterans come across some classic knife-wielding street punks in an alleyway, all styled like their going to appear in a live-action version of Streets of Rage, but six young villains are no match for original Gs like these.

“People treating me like dirt ever since I got out of jail. Sweeping out toilets, scraping crud off dishes, my girlfriend tryin’ to kill me with sex – and I’m dressing like Bozo the Clown, just to fit in! I don’t want to fit in anymore.”

Hong Kong’s finest Donnie Yen took on the role of Wing Chun grandmaster Ip Man, who famously taught a young Bruce Lee and created one of the calmest, kindest yet toughest characters envisaged on the big screen. Certainly more thoughtful and stable than the majority on this list, yet don’t mistake his kindness for weakness.

With Donnie Yen himself a highly accomplished and multi-faceted martial artist, he perfectly brings to life the hugely talented master. Constantly being challenged by every clown in town, Mr Ip is ever the reluctant hero. Preferring to spend his time eating food with friends, or sharing quality time with his family, he devotes the rest to training – and boy does it pay off.

Like any man, mild-mannered or not, you don’t want to test his patience, as Japanese General Miura, a karate expert, finds out for himself first-hand. Not content with restoring pride in his small southern region, Grandmaster Ip will restore pride in the whole nation. This is one seriously tough cookie!

Kam Shan-chu: “My northern boxing has lost to your southern one.”
Ip Man: “No, it’s not a matter of northern or southern style. The problem is you.”