Travel with a Twist: The Top Destinations for Literature Fans Inspired by Iconic Books & Authors

From trendy plant-based food festivals to ‘free-from’ supermarket aisles, veganism has rapidly gone from a fringe movement to a national phenomenon. In January 2018 over 168,000 people signed up to Veganuary – the annual campaign to encourage people to trial veganism for a full month – that’s a 182% rise compared to 2017!

The proven health benefits are so strong that even high profile sports stars like Venus Williams and Lewis Hamilton are turning to veganism to aid their performance, and their actions only aid the growing conversation around veganism within sports.

There are also lots of documentaries around the subject, one that has been gaining lots of attention is James Cameron’s film ‘The Game Changers’. Eight years in the making, it tackles the stigma attached to veganism that suggests following a plant-based diet causes disadvantage within competitive sports.

The myth-busting documentary demonstrates how some of the top athletes around the world are not only surviving but thriving on a meat and dairy free lifestyle. Dominika Piasecka, a spokeswoman for The Vegan Society, stated,

“The recent growth in veganism has been greatly helped by the association with celebrity culture and various sportspeople choosing this way of living”.

Many of those that choose a vegan diet are a big part of Blue Diamond Almonds family and, with a summer of sport upon us, they’ve taken a closer look for us at sports relationship with veganism.

Find out which sports have the highest number of vegans and take a look back (over the last four decades) to see who in the sporting world took up a plant-based diet first and which athletes are doing so now. 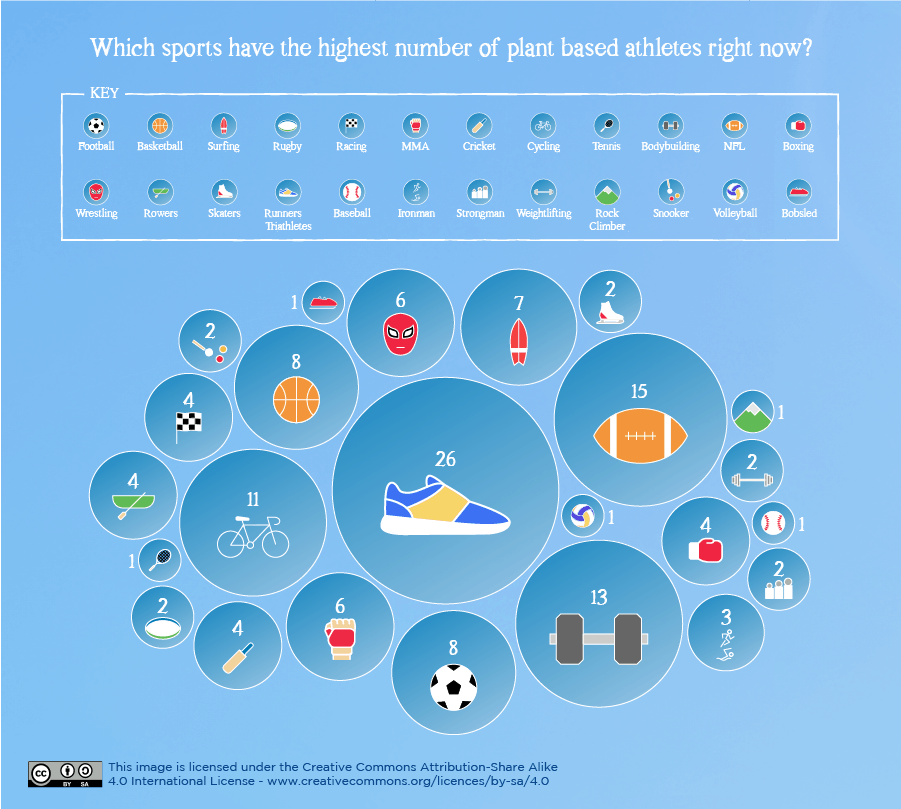 Living up to their sport, runners and triathletes come in at first place and are seemingly one of the earliest adopters of veganism.

One of the first pioneers, Dr Ruth Heidrich, was introduced to a plant-based diet in 1982 after being diagnosed with aggressive breast cancer. At 83 years young, she’s a multiple Ironman champion and author of four books. Track and field athlete Weia Reinbound also turned vegan in 1982 and currently holds 23 world records.

“In endurance sports such as running and triathlon, maintaining a low body weight is important. A plant-based diet can help athletes manage their weight while still enabling them to consume the right calories to perform to the best of their ability.” John Mulcahy, director of SSA (Sport Science Agency)

Surprisingly, bodybuilders more than pull their weight in the plant-based promotion, with the second highest concentration of athletes out of all the sports researched – a number of which began to transition in the 90s.

Robert Cheeke, who began his journey into veganism back in 1995, has used his professional success to help lift away the ‘meathead’ stereotype often placed on the sport. When asked about his biggest achievements he commented: “I’ve been able to inspire people to surpass what I’ve achieved and become bigger, stronger and more accomplished.”

“It may sound surprising that more bodybuilders are turning to veganism but recent evidence has shown that plant protein is as effective as animal proteins when it comes to building muscle. You simply need to ensure you consume a wide variety of sources and eat them in sufficient quantity.”

The turn of the century saw a number of cyclists reconsider their diets and transition to a strictly plant-based lifestyle, including professional mountain biker Christine Vardaros and five-time US national champion Zak Covalcik. Zak who was already vegetarian, turned vegan in 2004 two years before he began racing bikes professionally, meaning all of his impressive results were achieved on a vegan diet.

The 00s also saw the first MMA fighters, cricket players and baseball stars adopt vegan lifestyles. Perhaps one of the most famous fighters Mac Danzig retired in 2014 having only suffered two knockouts his entire career.

The NFL has seen a recent rise in popularity in plant-based diets, with around 15 established players now ditching meat and dairy. However, many admit they don’t stick to it 100% of the time. Tom Brady, arguably the most famous NFL vegan, only follows the diet 80% of the time (eating lean meat in the winter months).

A number of high profile footballers have also seemingly adopted a similar in season and out of season mentality, with premiership players including Hector Bellerin trialing veganism to help ease inflamed joints.

Tennis has only one high performing vegan contender, but she is one of the world’s best. Venus Williams, number one ranked tennis player in the world by the Women’s Tennis Association on three separate occasions, has four Olympic gold medals and is a six-time Wimbledon champion. Furthermore, she did so at the age of 37, making her the oldest finalist of the tournament since Martina Navratilova in 1994. Venus used a raw vegan diet to tackle the symptoms of Sjögren’s syndrome when diagnosed in 2011.

Although other high-profile tennis players such as Serena Williams and Novak Djokovic have come out in favour of plant-based diets in recent years, neither has been able to stick to the diet long term.

Two great examples of dietary changes are Tom Brady and Venus Williams. At various stages of their careers and for different reasons, they both attribute improved performance with the move to plant-based (or predominantly plant-based) and as a significant part of the reason they have been able to extend their careers. John Mulcahy, director of SSA (Sport Science Agency).

Many of today’s top athletes are radically changing their nutritional plans, due to the notable link between improved performance and plant-based diets. Industry experts and the athletes themselves have recognised the strong impact a plant-based diet can have on both the body and mind, and sports stars are keen to reap the benefits.

Take a look at some of the key findings…

One of the proven benefits of a plant-based diet is its ability to aid and speed up recovery. For sports stars unfortunate enough to encounter major health issues in the midst of their success, the diet can be the saviour of their careers. Athletes choosing a plant-based diet for health issues include footballer Russell Martin, tennis champion Venus Williams, wrestler Daniel Bryan and cycling Paralympian David Smith.

As the recent documentary ‘The Game Changers’ suggests, there are many positive effects on your body that are induced by a plant-based diet, and for the professional athletes who push their bodies to the extremes regularly, adopting the diet is a logical change.

“There is good evidence that diets without meat can support strength and cardiorespiratory fitness development. It may even be advantageous for endurance performance, according to one study. Exactly why this is the case isn’t clear but perhaps by having a higher carbohydrate intake, vegans have better glycogen storage, which could improve training and increase aerobic fitness.”

As well as the clear mental and physical benefits of a plant-based diet, top athletes do reference other reasons that helped them make the decision too. At the top of this list is a concern for animals, a topic vegans often feel particularly passionate about and that’s been well-covered in recent documentaries and books.

These dedicated animal lovers can be found in almost every sport including surfing (Tia Blanco Defoe), MMA (David Meyer) and Cycling (Dotsie Bausch).

Whatever an individual athlete’s motivation, it’s clear that veganism and plant-based diets are only set to continue growing in popularity within the sporting world. Over to sports nutritionist John Mulcahy for the final word…

“Athletes and coaches are always experimenting. In an era of increased information and an openness to try new ideas it’s no surprise that, as Blue Diamond Almond’s work has shown, a number of athletes are going plant-based. After all, they wouldn’t think twice about experimenting with new equipment or new training regimes.”

Thinking about making a step-change to your diet? Check out Blue Diamond’s full range of milk alternatives here and then head over to their recipe hub for some vegan meal inspiration.