If you haven’t yet come across Parisien cook Alexis Aïnouz and his hugely popular YouTube channel Alex French Guy Cooking, then prepare to have your culinary eyes opened and your tastebuds tinkered with. Yes, aside from demonstrating simple foolproof recipes online, the man who became a staple of the Jamie Oliver Food Family has now released his own cookbook Just A French Guy Cooking, where he demonstrates his passion for food with cheap, easy to replicate recipes that don’t compromise on flavour.

A self-confessed food geek, recipes include an eclectic mix of everything from a French take on Fish & Chips, an amazing Steak Tartare to Fake Croissants and a simple sourdough recipe for ‘normal people’. There’s food hacks, tips and tricks like wine pairing for dummies and seven things to do with a microwave and it’s all delivered with his own unique sense of humour. We caught up with the man himself for a quick chat.

The MALESTROM: Tell us where your love of cooking came from?

Alexis Aïnouz: I came to love food as a child, traveling the world with my parents, plundering every market on our way, but my interest in cooking came much later. Not the most romantic story I’m afraid. When I moved in with my wife a few years ago, we split the housework into two equal parts.

She got laundry and cleaning, and, since I was already into food, I got cooking and shopping (a bargain, I know). From there, cooking every lunch and dinner for 2 – and then for 3 – I slowly but surely developed an appreciation for cooking. I enjoyed the repetition, the “routine”. Faster, more efficient, more knowledgeable: I wanted to get better at it.

TM: You’ve got a huge following on your YouTube channel, how did that all start?

AA: Fun yet scary fact: I did not start YouTube gradually, ie with a job on the side. Instead, I went all in the very first day with zero following. That was five years ago, and back then it literally took me months to get to 100 subscribers. AT M+8, I entered a competition hosted by Jamie Oliver. He was looking for YouTube Food Talents to join him and his team, to start a YouTube network. Not gonna lie, there still was a tremendous amount of work, but that really helped my channel a lot, and getting the exposure I was looking for.

TM: What are your earliest memories of food?

TM: How did your relationship with Jamie Oliver develop?

AA: After I entered the food tube network, we worked together for 3 years. Collaborations, events and parties, even though it was hard work, we sure had a blast. And since I am an outsider, that was like school to me.

TM: Do you have any plans to open a restaurant of your own?

AA: I love making movies, but managing a restaurant is a very different business.

TM: Tell us about the book then? There are some fantastic recipes and great hacks in there. It’s a real eclectic mix of food cultures as well?

AA: It’s quite an accurate reflection of my brain. Geeky, cheeky, French, but opened to other cultures as well. Most importantly it’s simple and fun.

TM: We love the winemaking tutorial on your channel! Any plans to expand that empire? How’s that vintage developing by the way?

AA: Winemaking is the most challenging process ever! It took me eleven months to make 4 bottles of technically average, but spiritually mellow, red wine. I’d love to start that again but on a much larger scale. I am thinking at least 5 bottles this time.

TM: What would you be doing if you weren’t in the culinary game?

AA: I was, and still am in many ways, a digital entrepreneur before the YouTube thing, so I guess I would still be in the startup game.

TM: How important is organic or locally sourced to you?

AA: Organic or natural foods, locally sourced from sustainable producers, that does matter very much to me. I think we need to go back to a more reasonable approach when it comes to getting food and eating it for that matter.

TM: Ok, you’re hosting a dinner party, who are your dream guests and what’s the menu?

AA: Gal Gadot, Elon Musk, Beyoncé, Macron (gotta have a French president at my table at least once), The Rock & Kevin Hart, Dave Chapelle and Jamie Oliver. Super Duper upper-class French menu, with wigs and all, but with lots of wine.

AA: I haven’t got a favourite, but it has to be a Chinese restaurant. There’s so much to explore in Chinese cuisine. Extremely exciting.

TM: What’s your least favourite food and why?

AA: Bugs maybe. The only reason why I tasted those in the past was as a pre-revenge since they’re gonna eat me up someday. Ew sorry.

AA: Instant ramen noodles. I know it’s bad, I made a whole series about it BUT I CAN’T HELP MYSELF.

TM: What’s the best meal you’ve ever had?

AA: Nothing to do with the food, but the people. At my Grandma’s place with my family. Oh, and her potatoes were next level.

TM: Your favourite place in the world for a romantic meal?

AA: Paris! What type of question is this?!

TM: Have you got a go-to hangover breakfast?

AA: Cold pizza with chilli oil. It’ll make or break it, to be honest.

TM: Who’s had the biggest influence on your cooking?

Just A French Guy Cooking by Alexis Gabriel Aïnouz (Quadrille, £15) is out now. 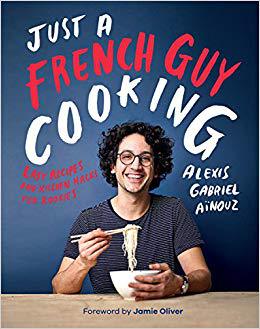