In the final part of our interview with Michael Deeley the British Producer responsible for iconic movies Blade Runner, The Italian Job and The Deer Hunter, we hear about the genesis of one of the greatest sci-fi films of all time Blade Runner.

The MALESTROM: You Produced Blade Runner, which is now seen as a seminal film. Did you originate that?

Michael Deeley: Yes, in 1979 I developed a handful of projects but I couldn’t find any enthusiasm for them. Then, I suddenly received a screenplay based on Philip K. Dick’s 1968 novel, Do Androids Dream of Electric Sheep? Adapted by Hampton Fancher, an unknown actor and stage director.

Back then it was called Dangerous Days, and we actually took the title, Blade Runner from a little known William Boroughs novel, Blade Runner: A Movie… for a little sum of cash of course. It was a great piece of work and I set about looking for an A-list director.

TM: Who was your first choice?

MD: For some reason, we became fixated on Michael Apted first and then Ridley, but we figured Ridley wouldn’t want to do another science fiction film after Alien, although we were wrong, and he eventually signed after Dune fell through which he was developing.

TM: What are your thoughts on Blade Runner 2049?

MD: I loathe the idea. I think it’s cheap, shallow, an appalling thing to be doing, and I cannot understand why Ridley would want to be connected with it.

TM: So, you won’t be watching it then?

TM: Who was the original thought or choice for the lead before Harrison Ford?

MD: Dustin Hoffman was someone we talked about. We negotiated for a long time with Dustin Hoffman…would have been very interesting casting, a nasty, sinister little figure which he would have been, and eventually, it just fell out of being possible because Dustin would simply not stop wanting to make changes. Three months into conversations he was starting to go on about, ‘Why don’t we start to introduce cryogenics?’ And it just got boring.

TM: What do you think of Harrison’s performance, because it looks like it is purposely morose?

MD: Well, of course, there was the looming issue of here’s an actor that wants to be playing in a classic style, which he did, like the early American detective films, that sort of feeling. Subsequently, of course, it’s argued that he is a replicant! But that’s the theory that I know was never in the original concept.

MD: No, not at all, it was developed. Actually, Ridley developed it, he decided this was a great twist but it was never permitted to be part of the picture.

TM: What do you think of that now?

MD: I never liked the idea because, in a sense, it’s a picture of the conflict between one species and another. Suddenly, if you make them all the same group, it’s simply a squabble. Deckard had to be a different creature to create an enemy. It’s like, you know, you can’t have a war story of Germans fighting Germans.

TM: Sean Young brings a huge amount to the part of Rachael, that vulnerability. Was she your first choice?

MD: No, Hampton was very keen on Barbara Hershey, who was an excellent actress and it would have been easy for her to play the part. We auditioned her along with two others but we wanted an unknown. And when we saw Sean Young, with that sadness in her eyes… well, she was perfect as the young woman with a terrible secret to hide.

Rutger Hauer was the first choice for Roy Batty… he had incredible physical presence back then, and Daryl Hannah wasn’t even 20 when we cast her. She had been in a Brian De Palma film, but we also liked the fact that she was the niece of the great cinematographer, Haskell Wexler.

TM: What are your thoughts on the contentious voice over?

MD: Oh, the whole handling of the end of the film was absolutely dreadful. On the last night of shooting, Ridley and I were officially fired from the picture… it was just the last, final straw of the people who were involved, because how could they finish the picture without us? The film had to be cut, the film had to be scored, and the film had to be finished, which is my area of expertise and also Ridley is very good there.

So, we just went on working, which was fine and that was the end of it. But they hated it. I’ve still got the notes from the two people who were involved with it, who only put up a fraction of the money but who ended up in control, and they hated it and gave disparaging remarks.

But the voice-over thing, when we previewed it a lot of the audience thought they were getting one of the pictures like Harrison Ford had just been in, Raiders of the Lost Ark, and when they saw how dystopian Blade Runner was and how in many ways, perhaps depressing, they were baffled… didn’t know what was going on and didn’t feel very good about it.

So we got quite a lot of cards from the previews we did based in Detroit and one or two other places, and they were negative, there was instant panic from the financiers and it was, ‘if they can’t understand it we’ve got to put voice over on it so they can understand’, and we have to have an ending.

So, we do the voice-over and Harrison Ford was so disgusted with having to do it that I think he did it deliberately badly, but we did and borrowed a piece of film from Stanley Kubrick to tack on the end, which was a happy ending with a car with Rachael and it was practically laughed off the screen.

TM: And what about now? It’s considered a classic…

TM: And you still get those today?

MD: We still get nothing today, because the profits are still paying back the interest on the budget, because it was years before it took any money, and then it took it in secondary markets you see.

What happened, a copy of the film was dug out and played for one night in a cinema in Santa Monica and it was the original cut and it was very different, very much better without all that voiceover on it… and some smart guys suddenly wrote letters and subsequently, a groundswell seemed to pick up and Ridley was finally given the chance to do another cut, which he did and it was well-received and it was okay, but it wasn’t magic.

But then about seven or eight years ago, Warner Bros who had put up about a third of the money, were distributing it in America and put up $2.5m for a really good clean up of the movie; some things that looked wrong were reshot, the female android running through the glass doors, that was reshot… and the whole thing was trimmed and recut, improved tremendously.

You’ve suddenly got a picture that could make money, and it made a lot of money, but it could never make back its budget, the film cost $26m, which is over budget, but the interest on that is running on that for now for 20, 30 years …

TM: It’s such a classic film, but Harrison Ford has always been so disingenuous about it?

MD: Let me tell you, two things: he would never discuss the film. He would never do any press or interviews when the film was released… he wouldn’t. Now, the reasons are one: he had a very poor relationship with Ridley, he thought Ridley had totally let him down and was not treating him with respect or how an actor should be treated.

Now, the trouble here, this is the issue with Ridley’s personality… Ridley is a perfectionist, in particular, in a micro-managing way, he would sit up on a crane or something with his eye glued to the camera, because he loves being an operator, and spend five minutes or ten minutes moving an ashtray two inches one way.

Now, the result of that detail is amazing images, and when he eventually got the set right he would want to start shooting, he wouldn’t sit around coddling his star, and Harrison had just come off being coddled as part of an ensemble cast, and he never got it, and he probably resented it bitterly.

TM: So, ego was involved there then?

MD: I think it was almost the reverse, he really did feel that he couldn’t do the job without proper directing. I mean he had had Spielberg coddling him before – he’s very good at chatting up actors, and Ridley wouldn’t do that and Harrison couldn’t bear it, and he thought the performance suffered as a consequence. Indeed, the film opened so badly but it was also the timing… the same summer as Spielberg’s E.T. it was years before it became what it is.

TM: It stands up as one of the most iconic films of all time?

You can read buy Michael’s brilliant book Blade Runners, Deer Hunters and Blowing the Bloody Doors Off: My Life in Cult Movies HERE 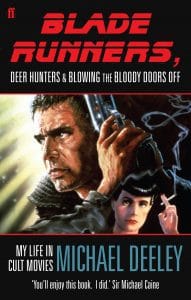