There’s not many blokes out there who we believe are more qualified to talk about how to thrive under pressure than Jason Fox. Jason, or ‘Foxy’ to his mates, became a household name by dressing down slacker contestants as an instructor on the civilian and celebrity versions of Channel 4’s hit show, SAS: Who Dares Wins. But before TV came calling he’d made a career out of risking his life for Queen and country as a Marine and a member of the elite Special Boat Service (SBS). Having been involved in the planning and execution of dangerous military ops involving hostage rescue and counter-terrorism, Foxy has what you might call unquestionable credentials.

Which is what makes his brilliant new book such an authentic and not to mention relevant read. After the release of his candid best-selling memoir Battle Scars, which we spoke to Jason about last year, comes his second book, Life Under fire: How to Build Inner Strength and Thrive Under Pressure. In it he outlines the lessons learned during his time in service, giving gripping accounts of some of the daring missions he was part of.

The book serves as a toolbox to teach the techniques required to conquer life’s challenges and build the mental grit and reliance needed to become an elite soldier. Given the current climate who couldn’t do with learning some serious new skill that help us thrive when under pressure?

We spoke to Jason about some of the key techniques found in the book Life Under Fire, his own mental health battles and the signs we can all look out for in our friends and ourselves, as well as the recent filming of more SAS: Who Dares Wins, which has been keeping him very busy.

TM: What was the original idea behind the book?

Jason Fox: What really kicked it off was my first book, Battle Scars, my biography that went into my emotional journey. There was a bit of feedback from it, that I talked about what my journey was, but what were the lessons I learned before it, during it and after it? So that’s where this came from. I suppose it puts a bit of meat on the bones as to what was going on with my journey in the first book.

TM: Given the therapy you went through, you’ve explored some of the thoughts and ideas that came from that…

JF: Yes. It’s everything from my take on how the military moulded me into a young soldier, then it’s my take on how I dealt with certain things in that, and also how I was taught to help to deal with my depression through the techniques my therapist taught me.

TM: It’s essentially a really valuable tool kit. Maybe talk us through one or two of those techniques, like keeping positive thoughts in the mind.

JF: I suppose everything does stem back to when I joined the Marines as a sixteen-year-old. They’re very good at turning people into resilient characters. The most important things I took away from my service in the Marines was the ethos of courage, determination, unselfishness and cheerfulness in the face of adversity. Those really are the things I carry with me today.

Cheerfulness in the face of adversity is basically telling you, yeah ok have a laugh, but ultimately It’s about finding a silver lining and always turning a negative into a positive. Because that’s the only way to deal with things. That’s probably one of the most important lessons. My ethos in life is to have fun and enjoy it. It doesn’t always turn out like that, but I’ll always keep looking for the funny in something so I can at least have a laugh at myself if something’s going wrong.

TM: Do you think we all have that inner grit? Does everyone possess it somewhere?

JF: Yes. I genuinely do. If I can find it then anyone can (laughs). I wasn’t born resilient, it’s something that comes from experience and you can teach it yourself. It can also come from the nature of your circumstances. I really do think everyone has got it in them. We’re all pretty much made the same and we’ve all got that resource to tap into. It’s just about finding out how to.

TM: Your low points are documented to a large degree in Battle Scars, but you talk further in this book about your experiences and how you were on the brink of suicide. You’ve been very open about mental health issues and how you’ve dealt with them as you want to help people through your own experiences don’t you?

TM: Do you think men still need to be more open when it comes to talking about their own issues?

JF: The old school mentality of bottling it up and maintaining a stiff upper lip might work for a few, but there’s a lot it’s not working for as men are committing suicide on an astronomical level. We need to rethink our approach to it.

The people out there who say we shouldn’t be talking about it are wrong because some of the people not talking about it are killing themselves, so lets look at a different approach. I’m not telling people to be soft and fluffy, you can still be a gritty and determined young man, but you can also be one who’s open to his emotions and understands them.

TM: What are the warning signs to watch out for with mental health that we can look out for in our mates and ourselves?

JF: Of course it’s individual as we’re all different, but there are some tell tale signs to look for. If someone is seeing a friend change then it’s probably worth exploring how to broach that subject with them.

For ourselves, if you start to feel an emotion that’s having a negative impact on you, it’s worth looking at that emotion. Give it a bit of respect and think about why you feel like that. Most people don’t do that, they just push it to one side and try and ignore it. They end up all that day miserable and probably in turn making everyone else’s lives miserable. No one benefits from it. But if that person had sat on the end of the bed before the emotion had an opportunity to take hold of them properly and explored why they felt a certain way, they’d probably work out what they need to do to get over that and move forward with a more positive outlook on the day or the week.

TM: In the book you talk about actively getting out of the comfort zone. You mention examples from situations you’ve found yourself in. One was an epic trip you went on canoeing along the Yukon with adventurer Sean Johnson. That sounded seriously hairy!

JF: Yeah, It was. It started as off as a nice trip and then got gradually worse and more terrifying. We had all sorts of encounters. But what an incredible experience. There were some moments in that when me and Sean really did have to dig deep into our reserves or resilience. It was hard work, the big storm at the end, that was tough. We were very close to the edge on that one. But there was a bright spot, Sean found a tube of Pringles and that made everything alright!

TM: Coping with fear is another thing that comes up in the book – which of course is very relevant at the moment. What can people do to help with their fears? One phrase you mention is “knowledge dispels fear”…

JF: It’s something that was taught to me in the military at a very early age. Ironically it was taught by the Royal Airforce, who are probably the softest of the three military arms, but that was something that stuck with me, knowledge does dispel fear. The more you know the less you’re afraid of because you understand things a little bit better.

Where we’re at at the moment with all the fear people are living with, I’d suggest at some point it would be unwarranted because we will bounce back. It’s been a terrible time and there’s a lot of people who have suffered and that have died, but ultimately we as a race, we will bounce back, we always have done. There will be opportunities that come out of this and before you know it this will be something that we speak about that we’re not afraid of as we’ve learned how to deal with it.

TM: You write about boredom in the book and its importance…

JF: We all should have a happy balance of excitement and boredom, otherwise the excitement becomes white noise. So I do enjoy sitting around and doing nothing. Not that i’ve been able to do much of that recently.

JF: So, in the year of Covid, I’ve never been busier weirdly. We’ve banged out three seasons within the space of three months. One in Australia that’s going out on a network there as we speak, then this week I just got back from filming two more UK versions, a civilian and a celeb one. They’re in the bag and getting edited ready to go out early next year.

TM: How did they go?

JF: Really good, they went really well. Good atmosphere on the shoot, good relationship between us all. The celebs… they were alright. I sometimes wonder what they think they’re applying for, I genuinely don’t understand why they don’t do a bit of due diligence and research. That one will be fun to watch, there’s some characters on it.

TM: Are there plans to keep going with more shows?

JF: We only found out the other day but the Australian one has been recommissioned. Two episodes have gone out and it’s done so well that they’ve signed up for another series already. So we’re definitely doing that. And the UK one is a rolling decision that as soon as it goes out as long as it continues to do well then it gets commissioned again. I believe it’s still got life in it.

TM: What do you hope people take away from the book?

JF: Hopefully it’ll be something that people find interesting that they can read as a story if they wish, but also hopefully they can use it as a reference book as well, where you can just pick chapters to swat up on. I’ll read it as well, as we all forget what we preach, what we talk about and it’s always good to remind yourself. So, I’ll be using it as a reset every now and again.

Life Under Fire: How to Build Inner Strength & Thrive Under Pressure by Jason Fox is out now. Get a signed copy HERE. 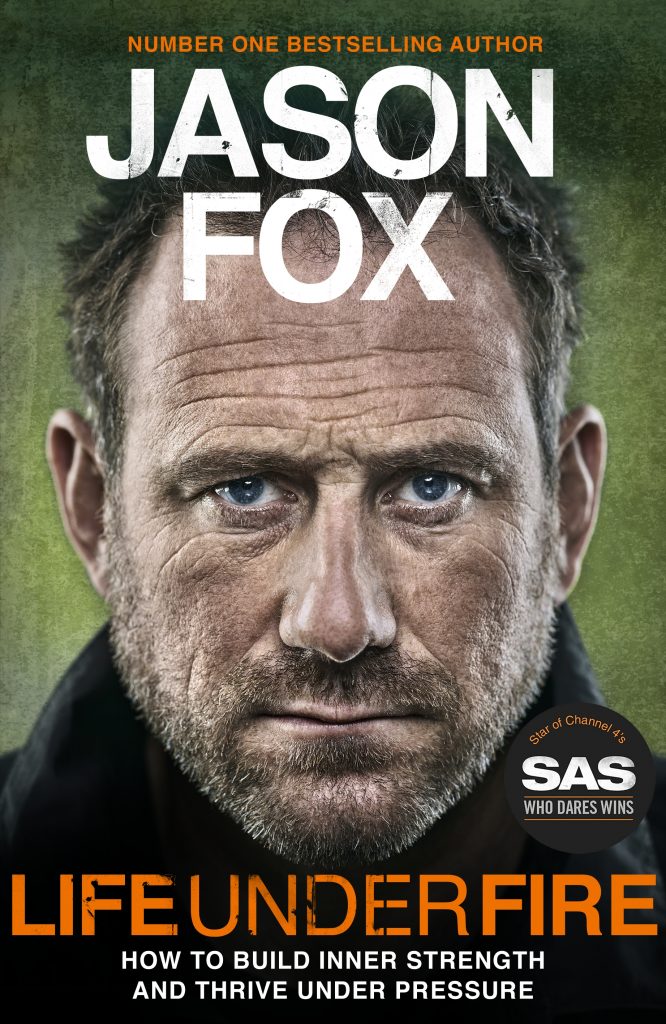