Heavyweight Hype? Our man in the know talks Joshua v Wilder and much more

In PART ONE of our chat with Wilderness expert Daniel Hume he told us about the amazing techniques used around the world to make fire. In the second part of our interview we talk about surviving in extreme situations, what the first thing you should do when lost in a potentially dangerous environment, why it’s so important for everyone to have some form of bushcraft knowledge, and what Daniel learned from Ray Mears himself about travelling and tracking in the wild.

TM: In terms of survival, what one piece of kit would you want with you in an extreme environment?

DH: It really depends on the environment, because in the desert I might say a water bottle would be good, but in the Arctic I would say a means of making a fire or a pair of gloves or something. The classic and what we always say at Woodlore is, the first thing to pack is a sense of humour, because it’s good to have a laugh when you’re away and when things go wrong as the inevitably do, it’s difficult without a sense of humour, so that’s the first thing.

But it’s very hard to pick out one piece of equipment, I guess if you had to pick one you could say a knife, a means of cutting is universally useful, but it does depend really on the specific environment.

TM: Have you ever found yourself in any particularly dicey situations?

DH: A couple, I mean I’ve spent most of my life teaching people how to avoid them (laughs). The thing is in situations, if you don’t how to deal with them then they can snowball and become something else and sometimes where people fall down is they don’t make the right decision and then something that’s a problem, that’s easily solvable, can suddenly become a massive issue and become potentially life-threatening, so the idea is to nip it in the bud.

I’ve been in the Arctic before and I’ve almost gone through ice on snowmobiles, that’s happened a few times, and luckily I’ve avoided it, but I’ve had some near misses. When you’re crossing lakes and things you have to have local knowledge and you have to follow the locals advice, but even so sometimes it’s still unpredictable. 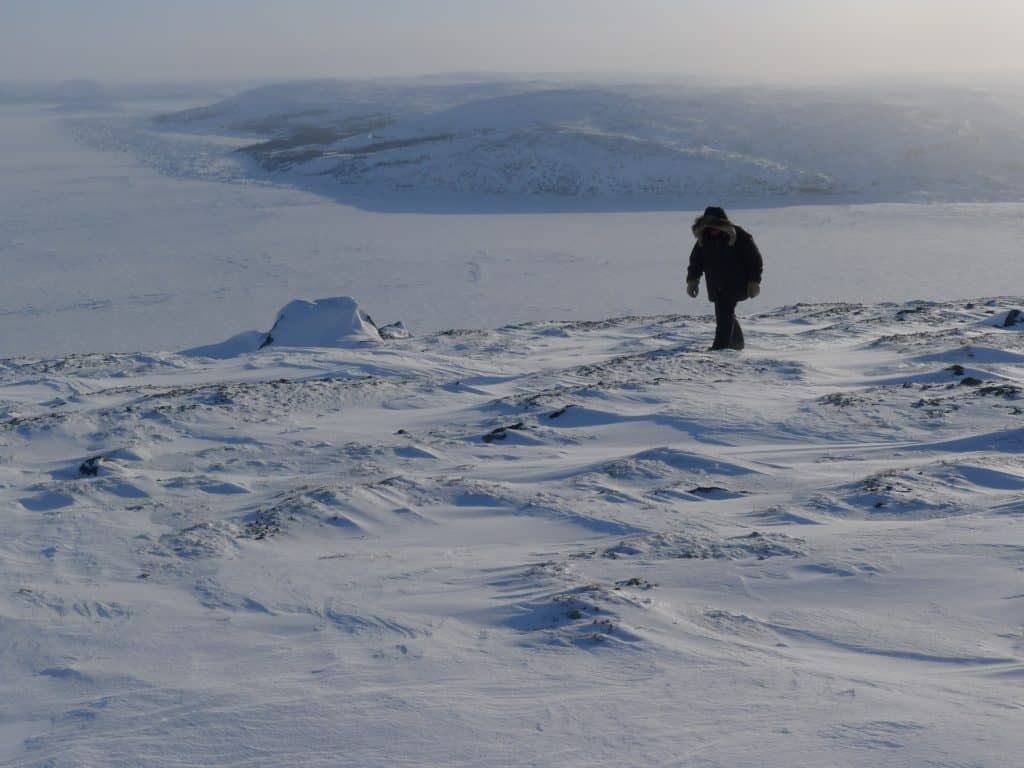 I had a time I was in Finland where it was only a small thing but it potentially could have been a bit worse, my friend and I, I wrote about this in chapter 11 of the book, we went to Finland and for one reason or another we left later than anticipated to go on a skiing trip in the forest.

We were planning to spend two or three nights out and we lost the trail – I was only about eighteen at the time, so it was one of our first trips together, we were quite young, quite inexperienced, we were good at reading maps, we still knew how to handle ourselves in the cold, but it got dark and we got a little bit turned around, we didn’t quite know where we were exactly, we knew roughly, but that’s not really good enough.

Anyway we ended up digging down into the snow, about a metre of snow and it was about -10 degrees or something. Not really cold, but cold enough that you had to switch on and we dug down into the snow, got some spruce branches, got a fire going, melted some snow over the fire for drinking water, got our dinner on and we made ourselves comfortable for the night. But that could very easily have continued and got worse.

In that situation, you need to stop and to actually make a plan, stop pushing on. Don’t think, the cabin must be around the next corner, it must be 200 metres away, the key is to stop and make yourself comfortable and that’s what we did.

TM: How important is it for people to have a little bit of bushcraft knowledge at least?

DH: I think it’s really important because when you learn these skills it teaches you manual dexterity, it teaches you to improvise, it gives you a liveliness, you know. People who stay outdoors have a liveliness to them, a sense of fun, but mainly it’s the manual dexterity, bending wood, shaping wood, making things, preparing things – it’s very beneficial even when you’re back home to have those skills. And of course as well, potentially they’re emergency skills.

TM: How has bushcraft changed, since you’ve been doing it?

It’s not anyone’s fault, it’s just the way things have gone. I’ve noticed that the older generation, and when I started ten years ago, they had a bit more of that, they had an ability, getting them to do something required minimal input from an instruction point of view. But now you need to give more instruction, to help people along, because they’re not used to it – some people struggle with those manual things. But that’s only the west really when I go abroad into more remote areas it’s not the same, but in the west yeah.

TM: In terms of yourself, you left school at 14, was the great outdoors a calling for you?

DH: Yeah it was, I didn’t really make a plan, to be honest, I knew I wanted to spend time in the outdoors and I just went with my interests and I heard about Woodlore around that time and I thought that’s something I’d love to do. I didn’t necessarily think I’d like to be an instructor, I just thought I’d love to go on a course meet people that speak my language and it went from there, it just grew.

I mean I’ve written a book about fire, but my interest really is the natural world and going to wild areas. I love going into the wilderness and fire is just one of the most important skills you can take with you, and it’s the skill that stood out for me and I wanted to write about it you know. 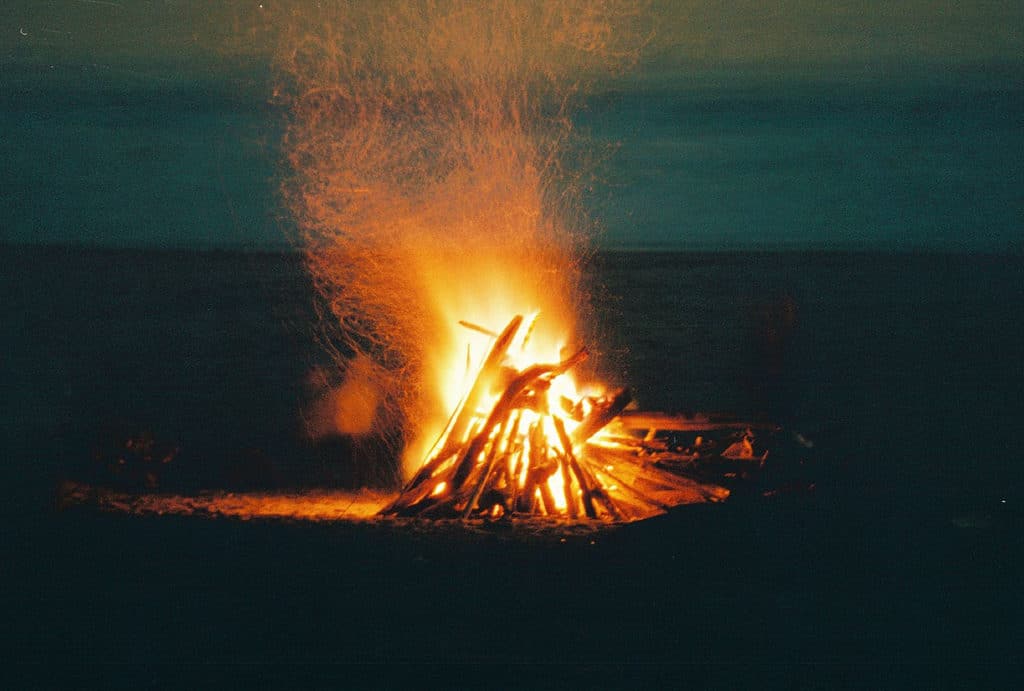 TM: How much of an influence did books like the SAS Survival Handbook have on you?

DH: Oh massive, it was very inspirational yeah. I remember going to the bookshop when I was 10 or 11 and getting that book and just reading it every night, it was so inspiring and I was trying out as much as I could. There were some books I would pick up and I’d try the things that were described and it wouldn’t work, so I sense that there were some inaccuracies in some of them, not all, but some inaccuracies that slowed my progress down.

But I’m thankful for that, because in the process I made mistakes that I wouldn’t have made otherwise and I learned from that. then I got one of Ray Mears’ books when I was about 13 and that was very accurate and it kind of connected with me in a way that no other book had really and I thought this is genuine you know – not that the others weren’t – but it just really connected with me and so that led me to Woodlore.

TM: How much have you learned from Ray himself?

DH: Yeah, a lot of the skills I learned as a kid and as a teenager I practiced, so a great deal of them I kind of taught myself. Ray of course taught me some skills, the more advanced skills, but the biggest thing is, he taught me how to actually travel in the wild, you know. I went canoeing in Canada with him and I’ve led numerous trips in Canada – I started off assisting him there, and I took lessons out there – you know two, three weeks sometimes a month in the Canadian forest just travelling by canoe.

You learn a great deal there, he taught me a lot about how to actually travel in the wild and in the arctic as well, winter environments. So we’d go up to the Arctic, I’ve been going to the Arctic for eight or nine years, every year going up with Ray to teach Arctic survival. He really taught me about how to live and work safely in extreme cold, you know we’re talking -48 degrees. A lot of the sills, learning the skills that’s not the end of it, you can have a basic foundation and then it’s what you do with that, that’s when the real learning starts.

TM: Did he ever teach you any tracking skills?

DH: Yeah we did a lot of tracking together, I actually led, well I still do, a tracking course for Woodlore. Ray led them for many years and then obviously got busy with TV and so he taught others and me, and yeah he taught me a lot about tracking. It’s one of those things you have to use or you lose.

TM: So practice, putting in the hours?

DH: Yeah if you have a break – for any tracker – you have to tune into the landscape again, that means going out and observing the signs left by something that’s moved through the landscape, you just have to spend a bit of time getting used to it again, but when you’ve done a lot of tracking that’s very quick, when you’ve done a lot of tracking you can very easily switch back into that mode. There’s nothing mystical about it, it’s observation and detective skills combined.

If you took a bushman from Africa – some of the best trackers in the world – and put them in the jungle they wouldn’t be as good, obviously because the environment is different, sign and footprints, bruising on things ages at a different rate in the desert to what it does here or in the jungle, so they would have to tune in to the landscape.

TM: What are the characteristics of the best survivors?

DH: It’s more a mental thing than anything else, a will to survive, your mental state. Someone that’s got a good mental state but no skills, has got more of a chance of making it through a situation than someone who’s got loads of skills but no will to survive, if that makes sense? As humans we’re really good at improvising, necessity is the mother of invention, you know when we’re put into a situation very often we come up with a solution. So a will to survive is the number one thing.

TM: Very interesting. Ok finally do you a piece of wisdom for our readers, something you maybe live your life by?

DH: There’s a great quote by a Native American from the 1800’s called Standing Bear,

No matter who you are, even in the west and in the modern age, we still need to be connected to the natural world and that quote has always stuck with me.

TM: Thanks so much Daniel, really fascinating stuff and great to talk with you.

The Art of Fire: The Joy of Tinder, Spark and Ember by Daniel Hume is published by Century, priced £20.00. Buy your copy HERE