Fancy Being as Strong as a Soldier: Follow These Military Fitness Tips

Sheffield in England wouldn’t be top of the list when it comes to producing a world-class skier, but there is a particular slope in the city, a rather dry one that is, that helped mould one, if not the world’s best freestyle skier James ‘Woodsy’ Woods. At the tender age of 25, he’s a dominant player in his field, winning a prestigious gold in the Big Air competition at the 2017 X Games with a breath-taking performance.

With the Winter Olympics 2018 in PyeongChang upon us, James ‘Woodsy’ Woods is leading the British medal charge, and with injury having hindered his hopes in Sochi 2014, he’ll be looking to make amends this time around. With all that in mind, we take a look back at our interview with the man himself.

The MALESTROM: Firstly we have to say congrats on winning gold at the X Games.

James ‘Woodsy’ Woods: Thank you very much, I appreciate that.

TM: How did it feel to win?

JW: Wonderful, obviously it was a huge, huge thing for me. It’s been a long time coming. I’m proud to be in that star list. In this sport that I do, yea I couldn’t be prouder.

TM: Where does that rank in terms of achievements?

JW: Absolutely up there with … it’s the raddest thing I have! I mean X Games gold is the finest honour in our sport. Yeah, pretty radical (laughs).

TM: And you won with a pretty crazy trick, a switch triple cork 1440 Octo grab. Can you tell us how tough that trick is to land?

JW: Well it’s a new trick in itself, so that’s quite impressive because it’s an ever progressing sport, it’s fast, it’s hard to stay on top of the game, so obviously you want to try and save your big banging new tricks for the major events and be the first to do them.

The additional part of it which is why it did so well and why it’s as groundbreaking as it is, is the grab position I get myself into which is quite complicated. Quite complicated on flat ground, so I think people were quite impressed I managed to do it while I was flipping and spinning around

TM: Yeah of course. How much practice does it take to pull off something like that?

TM: When you’re flying through the air thinking of those tricks what do you think about? What’s going on in the head, are you just concentrating on landing it?

JW: Absolutely. I’ve always said I live through that. When I watch my stuff back you get a lot back from replays. You get a lot of information, cause you’ve got the information through your eyes and your muscles are telling you. To be able to see it visually from someone else’s perspective you can learn a lot.

I’ve watched it back a lot and I’ve always thought to myself, yea I did do that and I enjoyed it. Cause your thinking, your brain’s working the same, you don’t feel like Peter Pan flying through the air, whizzing around. All sorts of thoughts are running through your head, dinner, girls, whether you’re going to land, oh I hope I don’t f**k it up.

All these things are still going through your head and that’s a part of the whole process to monitor that and try and be the optimal level to stop this kind of thing, but also not too over the top cause then you’re gonna fluff it. It’s really hard to manage, I mean I’ve been doing this for so long, I’m one of the most experienced people in the game and I’m still thinking about random stuff when I’m dropping in. I don’t know the secret but it seems to work.

TM: How do you handle the fear factor of those massive jumps? Do you get scared still, or are you over that?

TM: For our readers that don’t know, what is Freestyle skiing, or at least how do you see it?

JW: For me I really enjoy skiing as a whole, I love flying around the mountain, its something new, I feel like a superhuman when I’m doing it, I do this day in day out, but that novelty of flying around and being in the utmost control and legitimately being superhuman has never worn off.

And the free-skiing aspect is just a bunch of people that feel that same energy when they’re doing the skiing, they feel that same passion they love to do it so much.

And then you know they start jumping around flipping around and ‘I could do this’ and ‘I’m going to push this more’, you know what I mean and all this kind of ‘Well I could do this better than you’. We’ve got competitions on our hands but it’s very much a free sport.

TM: So you’re all pushing each other to further the sport?

JW: I struggle to call it a sport if I’m honest with you, its an art form for me, and its everyone’s expression of that self, their style, their inspiration coming out through their skiing if you understand what I mean.

TM: Yeah completely. As a northern lad from Sheffield, where there’s not a lot of snow, how did you become a top-level skier?

JW: Exactly, I don’t know either man (laughs). Well, I was going to the skatepark a lot when I was a kid and it just so happened that there was a dry ski slope outdoors, plastic slope right next to the skatepark.

And, I don’t know, I didn’t know what skiing was until I was doing it, and just from the first second I gave it a go, boom, it was just something I fell in love with. Before I knew it I spent every day of the whole entire year up there, I’ve got a year-long pass, I don’t know there’s no rhyme or reason I just ended up loving it.

TM: How much do you have to train? Everyday?

JW: I ski year round, I take certain breaks here and there but I ski all year round. I don’t stop, I don’t get any chance pretty much at all to come back to Sheffield, which breaks my heart, but you gotta do what you gotta do and this is my thing right now and I’m giving it my best shot all day every day.

TM: So that’s what motivates you, it’s not the prizes and medals it’s the joy of getting out on the snow and doing your thing?

JW: Exactly, my goal is always to be the best that I can be, and that mantra is truly what’s got me here, and I’m not about to change it now.

TM: Do you still get a chance to let your hair down and party?

JM: Absolutely. If anyone tells me it’s an inappropriate time to go to the disco I’ll be quite upset (laughs).

TM: What’s the lifestyle of a skier like? Does all the globetrotting take it’s toll?

My alarm says another day in paradise, there’s not a day I don’t wake up and feel like the most grateful person in the world. We get just enough of the rock star-ness to live that lifestyle, but with none of the bad stuff. I wouldn’t change a single thing. 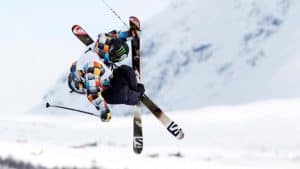 TM: That’s cool. You mentioned you rarely get the chance to go back to Sheffield when you do, what’s it like going back to that normality compared to the lifestyle you’re living now?

JW: It’s very surreal, to be honest with you. Whenever I get the chance to go back to Sheffield it’s seeing friends, seeing fam and yeah you just snap back into normal life.

So everyone’s got something to catch up about. I mean we hardly talk about skiing, its just the same old stuff isn’t it, girls, your last night out, nothing ever changes.

TM: That’s good to hear. Let’s talk Olympics. How high are your expectations for the Winter Games in 2018?

JW: Well, in all honesty I know I’m really good at this skiing lark. I love doing it, it would be wonderful to win the Olympics, and I’ve got no doubt that I could do that, but it’s really about doing the best that I can do.

Giving my best effort and showing the world what I can actually do. If I do that I know there’s nothing stopping me winning anything there is to win.

TM: How do you handle the pressure? Do you put pressure on yourself?

JW: This is one of my favourite questions. I’m so down with this. There’s really no pressure that anyone can put on me bigger than the pressure I put on myself you know, to be the best I can be.

Like I’ve said that’s my mantra through my whole entire life, whether in social situations, going skating, surfing, trying a new sport or whether it’s competing in the Olympic Games in skiing, I just want to be the best I can be and put on the best show I can.

TM: Finally, what’s your ultimate ambition in skiing? Is it to continue pushing those boundaries?

JW: To be honest I owe everything to skiing and I want to give back as much as I possibly can. To be someone that people remember after my time that would be amazing.

To have added my flavour, my input into the sport, there’s no higher compliment than to have inspired other people. I just love it, and that mentality is hopefully enough to inspire one or two other people to get into it, whether it’s skiing or snowboarding or any sport of any kind it doesn’t get better than this you know (laughs).