With Roger Federer once again gliding seamlessly to a major victory in the intense heat of the Australian Open, his effortless style and poise seem only to increase with each passing year, the question has to be asked where does he rank in the list of all-time sporting superstars?

And moreover, has anyone ever made their discipline look so simple. Victory on Sunday saw Federer’s trophy haul reach a whopping 20 major trophies, and all at the ripe old age of 36 to boot.

In an era that’s defined by a level of competition never seen before, with the magical Djokovic, the powerhouse that is Rafa Nadal and our very own (ahem) Andy Murray, his credentials are unquestionable, especially when you consider he once held the number 1 ranking in the world for 302 weeks straight. With that in mind, we look at the others who could reasonably claim the title of sporting G.O.A.T. 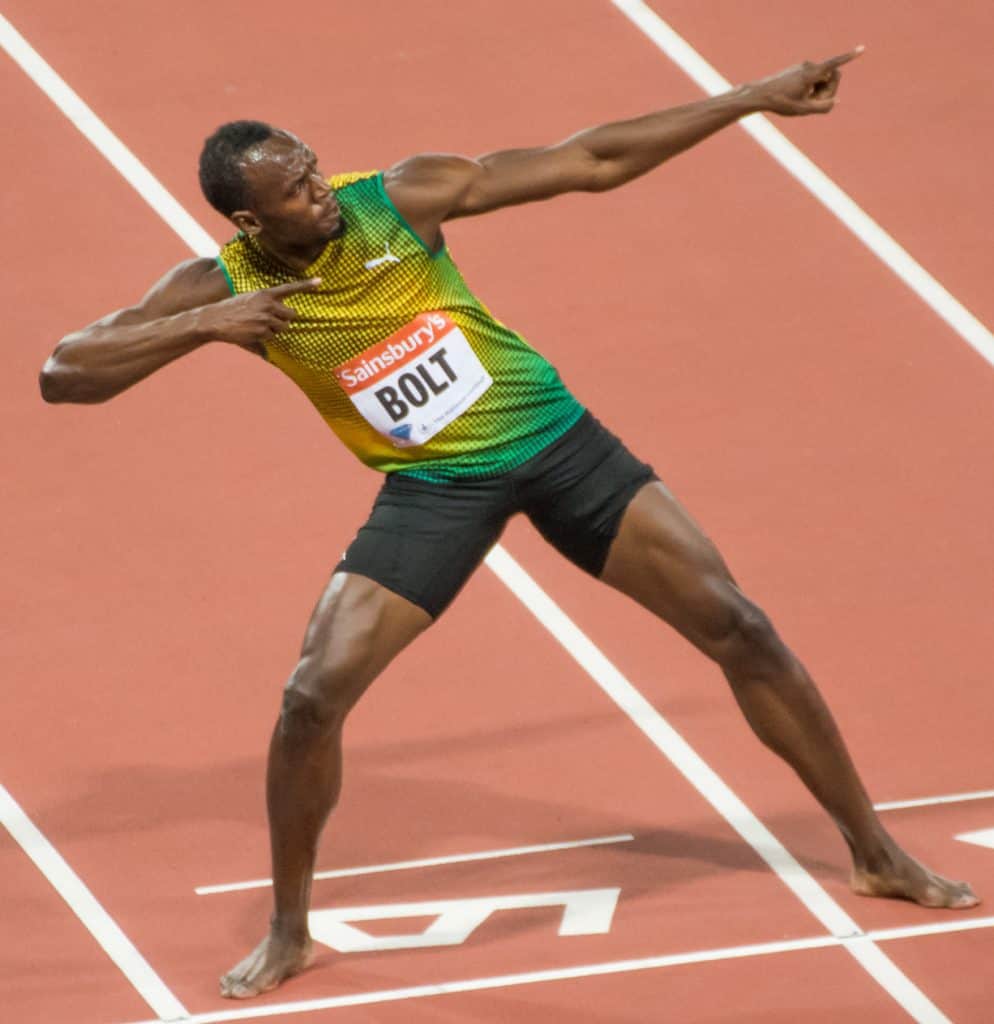 The fastest man ever to step foot on a track, the ‘lightning bolt’ himself is right up there when discussing the G.O.A.T. Not only has he transformed the notion of what we consider fast, but he’s also rescued a sport that was in serious danger of slipping off the map.

Question marks still remain over a number of athletes and the use of performance enhancing drugs, and perhaps what sums up his significance best is how track & field will cope without his looming presence.

He has run under the 10-second mark in the 100m over 50 times, which considering how many race meetings he missed is mightily impressive.

Of course, he also holds the surely unobtainable record time of 9’58 along with the 200m record of 19’19 and amassed 19 gold medals in both the Olympics and World Championships during his glittering sprint career. Probably more famous than Bob Marley, Jamaica’s finest has to be right up there.

Notable mentions: In a career that yielded 27 world records, 2 Olympic golds and 8 world championship medals Haile Gebrselassie was a pioneer in long distance running and an inspiration to a long list of great East African athletes.

Likewise, Mo Farah has blazed a trail in more recent times with a medal haul almost worthy of G.O.A.T status, and Jackie Joyner-Kersee was another with an exemplary career, dominating over multiple events. 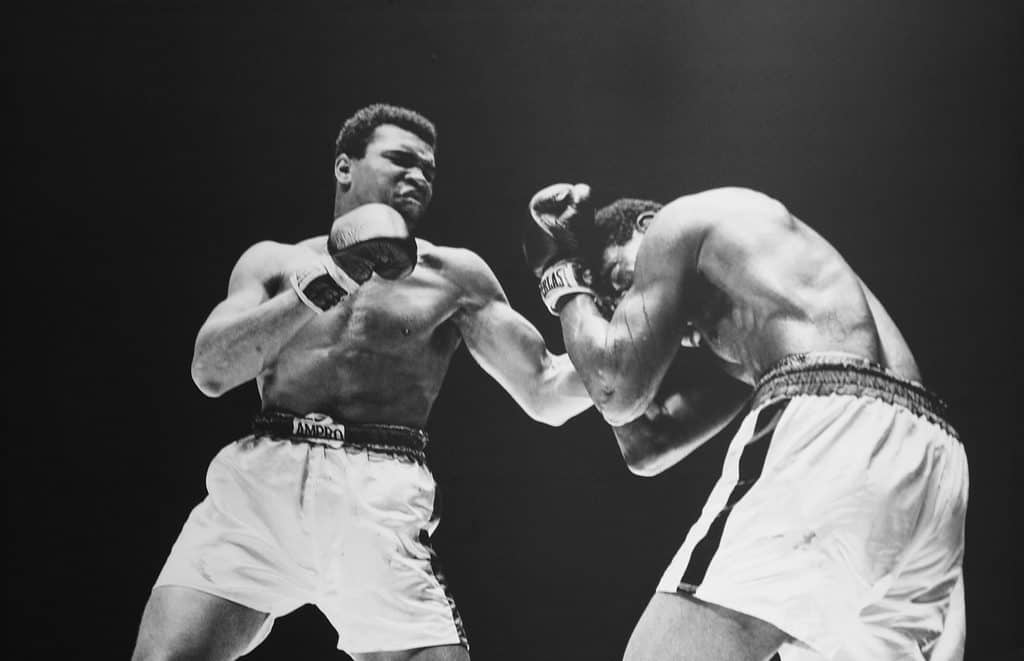 There may have been better athletes, there have surely been better boxers, but has there ever been a better sporting figurehead than Muhammed Ali. There is little that can be added to the storied achievements of the man that put boxing on the map. Like the 100m sprint, casual sports fans across the globe tune in to watch the big boys box and much of that is down to this man.

The three-time lineal heavyweight champion of the world was as quick with his lip as he was with his fists and became the biggest personality not only in sport but entertainment as a whole and his presence still looms large to this day with his outspoken activism still resonating across the globe. A compelling case that Ali may be the G.O.A.T.

Notable mentions: Sugar Ray Robinson probably does hold the title of greatest in boxing terms. The multi-weight champion became the first pound-for-pounder and his rivalry with Jake LaMotta was the stuff of legend, his record over a 200 hundred fight career isn’t too shabby either. 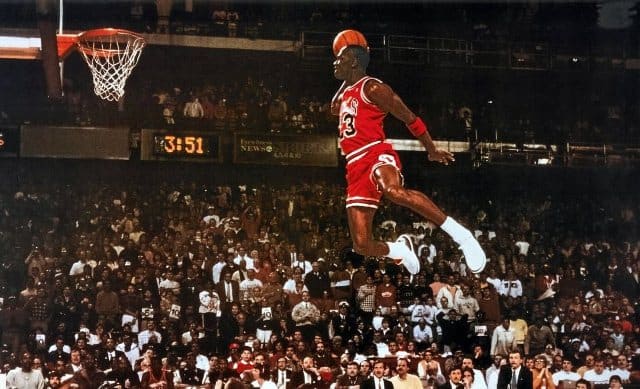 Despite a baseball bat-wielding hiatus, his record is incredible. With 5 MVP awards, 6 NBA final MVP’s, 31 50 point games and an average of 30.1 points per game, Jordan set the bar so high, it’s a credit to LeBron James that the discussion is on. One thing is for sure, he’s responsible for the greatest sports brand collaboration of all time.

Notable mention: As mentioned heir to the MVP throne is indeed LeBron James. His versatility and all-round game are what has surely sparked the debate, but for now, he’s still second fiddle. 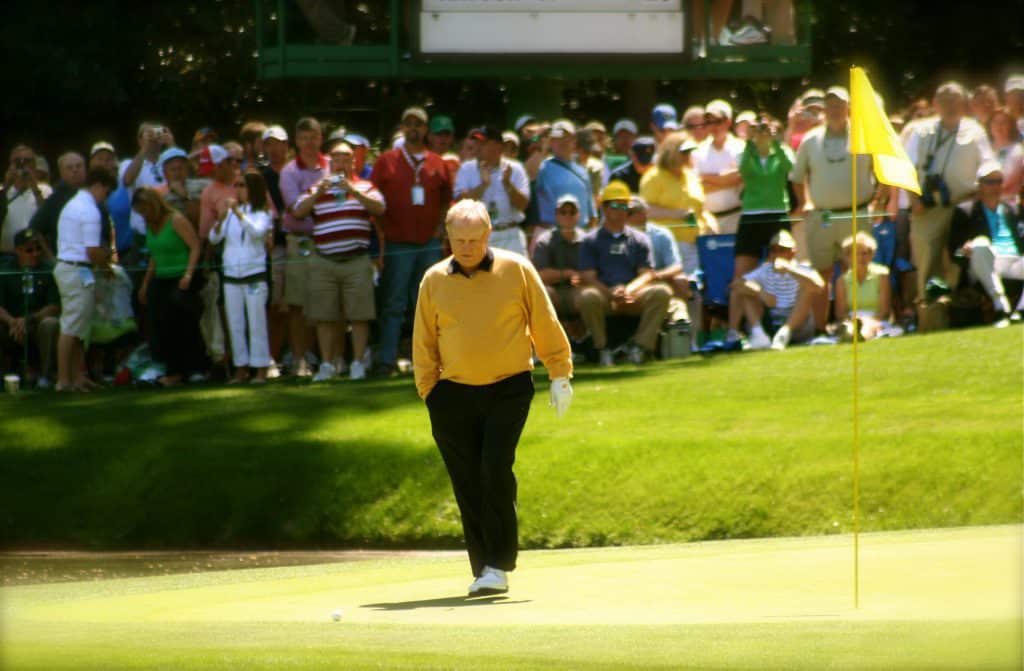 When you talk about the definitive golfing great, these days there’s only one man in the conversation. With 18-Major titles in his bag, and not to mention nineteen 2nd place finishes and nine 3rd in the big ones, ‘The Golden Bear’ Jack Nicklaus is the best all-time swinger from tee to green.

And you certainly can’t say he had it easy in terms of the others around him with the likes of Arnold Palmer, Tom Watson, Gary Player and Lee Trevino all vying for glory.

Nicklaus was also a great in the way he conducted himself on and off the course, the consummate professional and purveyor of sportsmanship, no better example of which when he conceded a putt to Tony Jacklin in the 1969 Ryder Cup at Royal Birkdale that would have seen the U.S. win the cup had he missed.

Another feather in his cap was becoming the oldest player to win The Masters in 1986, getting his hands another green jacket at the ripe age of 46. An all-around great of the game, but even the small amount of naysayers can’t argue with the numbers and his total of wins in the tournaments everyone wants to top is unlikely ever to be beaten.

Notable mention: Obviously the other man that very much was in that conversation in terms of greatest was Tiger Woods. Up until his spate of troubles starting in 2009 and subsequent downward spiral he was the man everyone thought would knock Jack off his throne. With 14 Majors to his name up to that point, it looked like he’d cruise past that total.

He’s currently on another comeback trail and it’s not inconceivable someone with such immense talent could get himself back into contention in one of the big four, but it’s unlikely now at the age of 42 he’ll ever trump Nicklaus’ haul of 18. 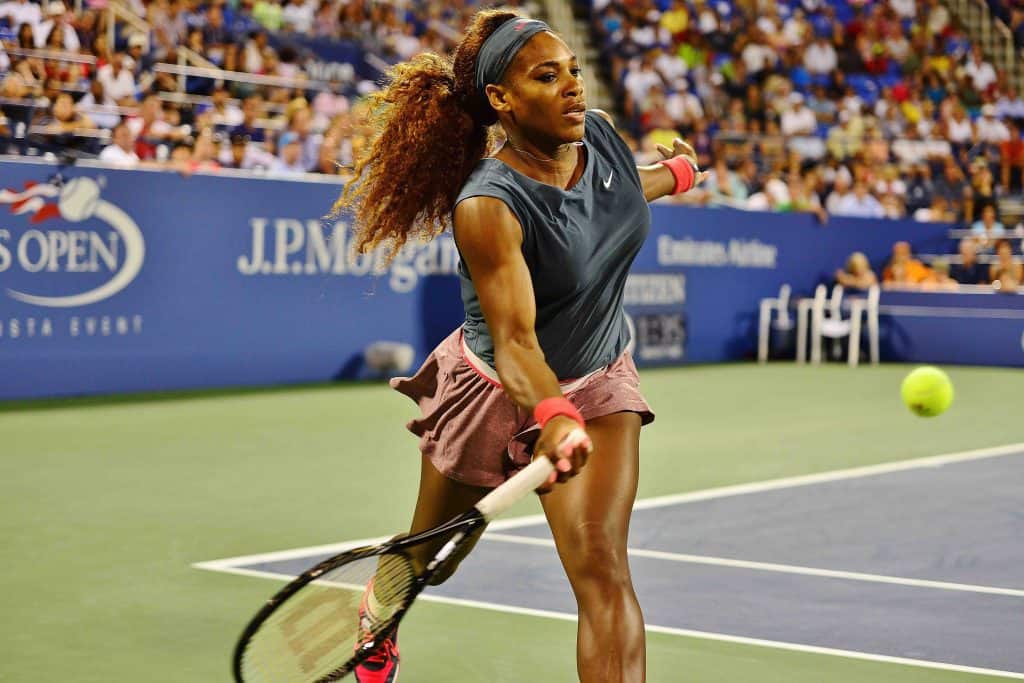 It’s important to mention at this point that the man who has given rise to this debate, Roger Federer, has actually been eclipsed in the trophy stakes by this woman.

Yes, Serena Williams has won a staggering 23 Grand Slam titles in one of the most dominant sporting careers in the record books. Having won her first title at the US Open in 1999, it’s remarkable that she is still casting her powerful frame over the women’s game.

All of this in a sport where many of the female stars have peaked and faded in years prior. Why then is Serena not considered at least the greatest tennis player of all time?

Well, many could argue that is the case, however the long-running debate between the men’s and women’s game continues, the sheer number of five-set matches that Federer has played in major tournaments and the time spent on court, and concentration required, is for many the key difference.

However, Serena has dominated against the best of different eras and has been equally dominant on all surfaces. The debate will surely rage on for years to come.

Notable mentions: Steffi Graf is the woman Serena overtook when she claimed her 23rd major title, and it would have been an epic encounter had these two ever crossed paths. Billie Jean King once stated, “Steffi is definitely the greatest women’s tennis player of all time.” It’s like a rabbit warren this G.O.A.T lark.

On a scale of 1-10 when it comes to dominating your sport, Phelps would score an 11. Phelps’s credentials make him a serious contender for G.O.A.T, he’s widely considered the greatest Olympian of all time.

And no surprise when you consider he’s won 23 gold medals at the Olympics and amassed 66 golds across all the major championships, he’s also set 29 individual world records and been a part of 10 relay best times.

Many will and justifiably so, point to the number of opportunities elite swimmers get at major tournaments to win a medal, but the sheer dedication and endless hours of training and minute margins of error that account for success in swimming mark Phelps out as one of the all-time greats.

Notable mentions: Obviously Mark Spitz was fantastic and ‘Flipper’ the dolphin was pretty quick, but Phelps was head and shoulders above all who came before him and have since. 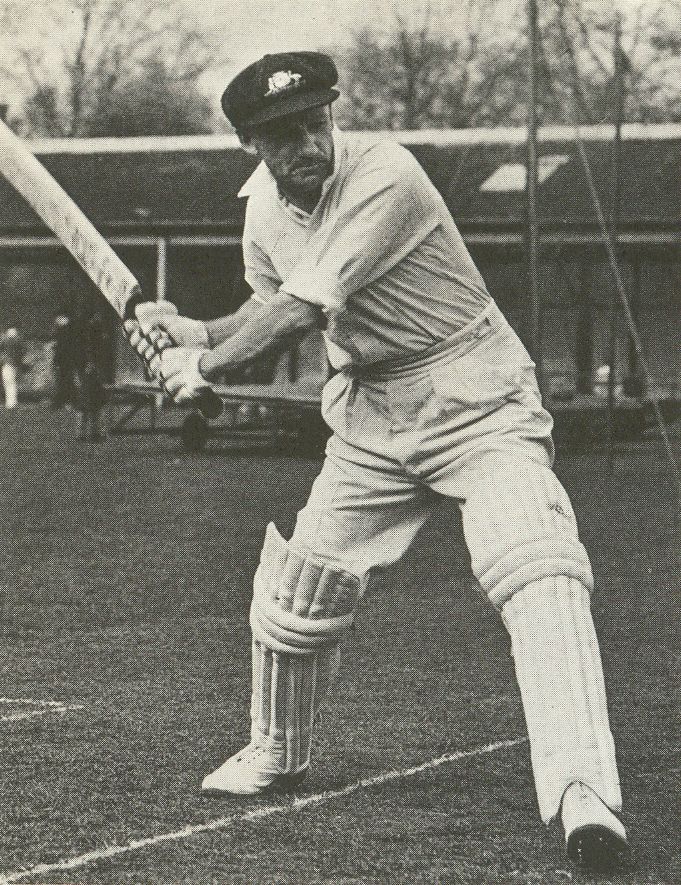 Once again people can talk about era’s and opposition, environmental factors etc, but the fact remains that during his illustrious career Donald Bradman dominated in a way that no other sportsman ever has.

He was quite simply better during his career than any sportsman has ever been in theirs. His records are so impressive, they will never be eclipsed, and considering the notable talent that has tried over the years, none have come close to matching his run-scoring feats, or averages.

In 80 test match innings, ‘The Don’ scored 6,996 runs at an average of 99.4, amassing 29 centuries (the highest of which was the 334 against England at Headingley) and 13 half centuries. Probably the only man it would seem, out of all the greats, whose achievements genuinely will never be surpassed.

Notable mentions: There really is nobody who comes close stats wise, but of the greats, the swaggering and dominant Sir Viv Richards was a game changer, and Shane Warne and Brian Lara may well be the greatest ‘talents’ of all time.

He holds the record for being the greatest goalscorer of anyone, anywhere, ever, with 1281 goals in 1363 games. He’s the only player to win three World Cups and scored 77 goals in 92 games for Brazil.

However, in the realms of the world’s most popular sport, there is much to debate. Many of Pelé’s goals came in unofficial games, against poor opposition, and having spent his domestic career solely in his homeland before taking up superstar status (some may say retiring) in the newly formed North American Soccer League, many question whether he truly was the greatest.

What’s not in doubt is the global impact a fresh-faced 17-year-old had in the 1958 World Cup in Sweden, scoring a hat-trick in the semi-final against France and another two goals in the final against Sweden.

His legacy is really quite nostalgic and romanticised, many Brazilians would have Garrincha or Jairzinho as the best they’ve seen. A true living legend, but G.O.A.T, probably not.

Notable mentions: Of course for many years now Messi and Ronaldo have shared centre stage and truly are up there with the best ever, but ultimately it’s another South American who can stake a reasonable claim to the greatest footballer accolade.

Diego Maradona was quite simply the most sublime talent football has ever seen and were it not for some controversial on and off the field antics would surely be the G.O.A.T. 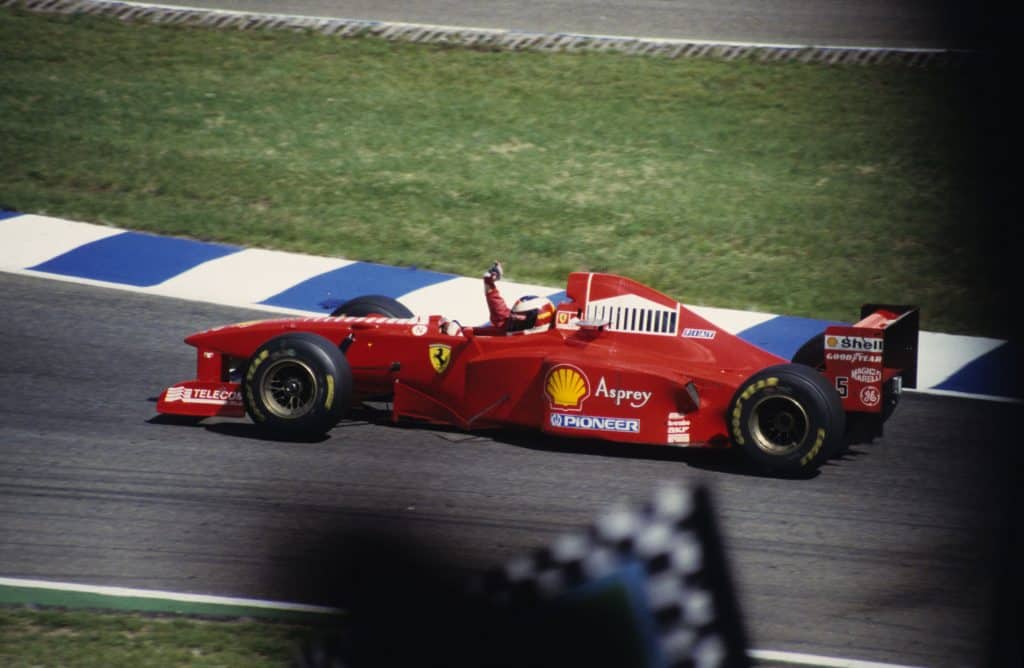 Formula 1 racing great Michael Schumacher lacked the charisma of an Ayrton Senna but he more than made up for it on the track. Ruthlessly efficient, he won 7 World Championship titles with 91 Grand Prix victories and an amazing 155 podium places.

With a reputation for overcoming the most challenging conditions, and problems with his car, Schumacher had a steely determination and a never say die attitude that left competitors in his wake.

Tragedy struck in December 2013 when a skiing accident left Schumacher in a coma, little has been made public about his current status, but a sporting superstar, his legacy lives on.

Notable mentions: Fan favourite the enigmatic Ayrton Senna had an unprecedented influence on the sport, in more recent times Lewis Hamilton has set about closing the gap on Schumacher’s incredible record.

Who do you think is the G.O.A.T? Let us know in the comments.