The billion-dollar bust-up between Floyd Mayweather and Conor McGregor is happening. Up to now it’s been fantasy fight talk and the sparring has been kept to social media, but things are about to get real.

When Mayweather and Conor McGregor step into a boxing ring in Las Vegas on August 26th, one thing is certain, both those men and the ones that surround them will make a serious load of cash. But is it just one big publicity stunt? Many at the sharp end never saw this actually happening when talk first began many months ago. Take UFC owner Dana White’s previous comments and his assertion that the fight won’t happen.

New York-based boxing promoter Lou Dibella summed it up on Sky Sports News earlier in the year, stating it would be very bad news for the UFC if the fight went ahead,

“I think the reason [UFC president] will make absolutely sure that it doesn’t happen is because Floyd smacking McGregor all over the ring would be good for boxing, and bad for MMA. Let’s face reality – Conor is a massive star in UFC. If Floyd smacks McGregor all over the ring (which is our best guess as to what would happen) that doesn’t hurt boxing.”

“I wouldn’t be keen, if I were in charge of the UFC, to let him move out of the circle and into a fight that he can’t win.”

However, he also threw is hat into the ring if they’re looking for a promoter. And maybe therein lies the point, the fight is money. Fight fans the world over are of course intrigued, the pure spectacle and theatre of it are mouth-watering, to see these two giant ego’s go head-to-head on the promotion trail may just be worth the pay-per-view fee alone. Those within the boxing world say this fight is a complete mismatch.

Precocious Mexican talent Saul Canelo Alvarez, who himself lost to Mayweather in 2013 branded the billion-dollar bust-up, as we will now constantly refer to it, as ‘a joke’. It seems we have the small matter of a fight that all credible and educated boxing fans and pundits agree is a waste of time. Pugilists the world over will be looking at this and the money involved and thinking ‘where did I go wrong?’ 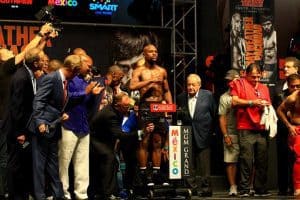 We spoke to top boxing pundit Steve Bunce about the fight only last month and he told us,

“It’s the greatest non-fight in history, Floyd Mayweather could fight fifty three minute rounds against Conor McGregor and I would be stunned, stunned if Conor McGregor touches him. That is that – Conor McGregor … I’m not even sure what terminology to put it into.

These two are oceans apart, just because they’ll both be wearing shorts, they’ll be topless and they’ve got gloves on – trust me it doesn’t work that way, it’s an absolute mismatch and I can’t wait for it to happen.”

The reality is Mayweather is the greatest boxer to step in the ring for a generation quite possibly more. He’s an absolutely phenomenal technician with the most astute defence, of the many great fighters he’s shared the ring with and there are many – Pacquiao, Marquez, Judah, Gatti, De La Hoya – very few have come close to landing that big shot, that knockout blow. Are we supposed to imagine that Conor McGregor is the man to finally do it because he’d need to?

If he went 12 rounds with Mayweather it would surely be a landslide points victory. Even against a fighter of lesser note than Floyd, a Khan, Brook or Pacquiao, it’s near impossible to make a case for McGregor. He’s box office and a global superstar, he’s turned the UFC on its head, and is a supreme athlete and mixed martial artist, but really a boxing match against one of the greatest of all time? Really? We asked The MALESTROM’s resident boxing expert David Jarvis what his thoughts were,

“McGregor is not a boxer. His YouTube clips show that. But it’s an event. The build up will captivate but it will not be an entertaining fight. McGregor will regret it I believe, not because he will lose but because he will look silly doing so. I’m reminded of the time a huge American basketball player called Wilt Chamberlain challenged Muhammad Ali in 1971.

The fight never happened but when it was proposed Ali met the 7ft 1in Chamberlain in a TV studio, looked up at him and shouted: “Timber”. It got a huge laugh and Chamberlain was visibly stunned by Ali’s self confidence and total disrespect for his size. The fight never happened, maybe because Chamberlain finally realised he wasn’t a boxer. Nor is McGregor – not at this level. For me he gets knocked out inside six rounds even against a 40-year-old Mayweather.”

The video below may help you decide about how Conor’s boxing skills will match up to Mayweather’s.