With 2018 set to see the likes of Joshua vs Parker, a potential matchup for the winner against ‘bomb squad’ CEO Deontay Wilder, and the ongoing rehabilitation of Tyson Fury, this is set to be a box office year for heavyweight boxing, particularly if your name is Eddie Hearn.

In fact, the potential rivalries, assuming Joseph Parker has the credentials he claims, and Wilder can handle genuine competition, could see a return to a bygone era where titles are put on the line at regular intervals and rivalries get etched into the history books.

Talking of history books we thought we’d whet the appetite by taking a trip back to a simpler time when protein shakes were something you got from whisking raw eggs, and sparring sessions involved a bare-knuckle bust-up with the old oak tree. We’d like to bring to your attention a man ESPN once heralded as ‘the greatest boxer you’ve never heard of’ – the uncompromising Sam Langford.

What’s remarkable about Langford aside from his many pseudonyms ‘Boston Tar Baby’, ‘Boston Terror’, and the ‘Boston Bonecrusher’, all despite hailing from Nova Scotia, Canada, was the fact that in his 250 plus fight career he boxed all the way from lightweight up to heavyweight which with a modest 5’7 inch frame was an incredible achievement, making him one of the first genuine pound-for-pounders.

Born in 1883, Sam Langford had a troubled early life, fleeing home at the age of 14 to escape his abusive father, he found himself living on the streets in Boston.

With very little in the way of work and hungry from a lack of food, he happened upon Joe Woodman who owned a local drugstore, but more significantly also owned a boxing gym where he offered Sam a job as a janitor.

It was a fortuitous turn of events, that would see Langford step into the ring as a sparring partner for some of the local fighters before eventually taking up the sport himself.

He went on to win the featherweight championship of Boston before turning professional and defeating all-time great and World Lightweight Champion Joe Gans, thought of by many aficionados to be the greatest lightweight boxer of all time.

Although in fairness as the story goes Gans had fought the previous day in Philadelphia before making the 300-mile trip to fight Langford. Langford would in later years describe Gans as the greatest fighter of all time. 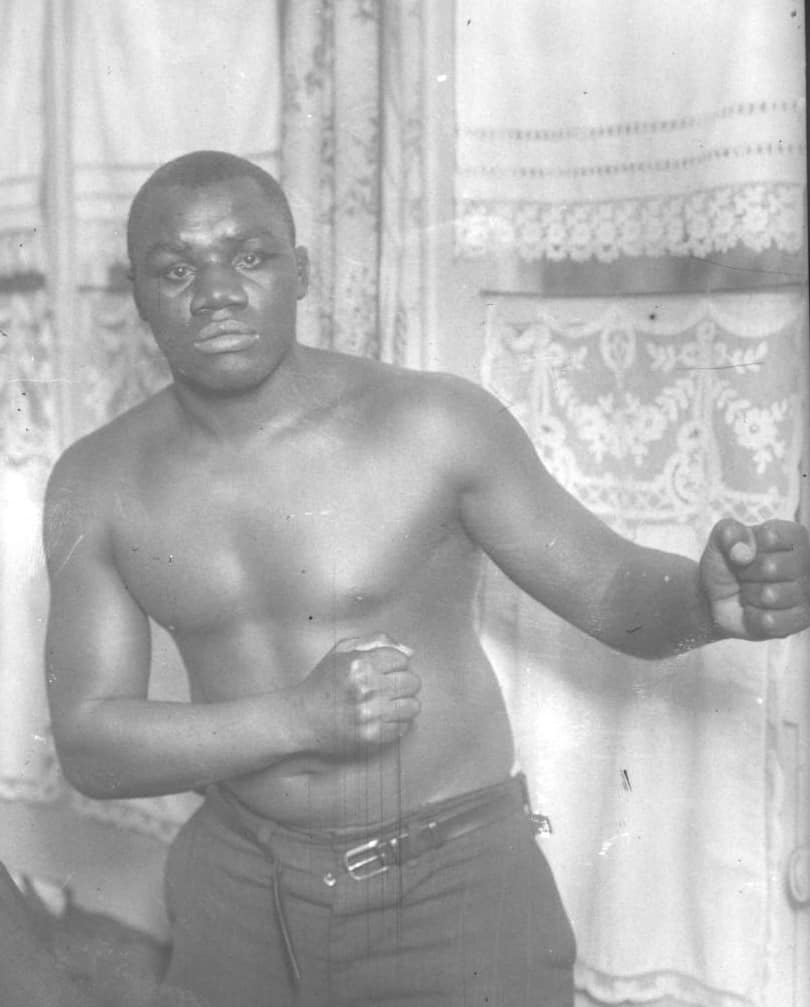 The colour bar would play a significant role in the journey of Sam Langford. At a time when separation was enforced based on ethnicity and racial background, opportunities were limited in the mainstream, even for supreme athletes like Langford.

This racial prejudice meant the unofficial World Coloured Heavyweight Championship, which was not sanctioned by any of the governing bodies, was the only legitimate prize on offer. Sam Langford would hold the title a record five times between 1910 and 1918.

Bizarrely when Jack Johnson became the first black World Heavyweight Champion in 1908, after defeating another Canadian Tommy Burns (this fight only came to pass due to the huge purse on offer to Burns), he continued the theme of refusing to fight black contenders, Johnson’s reasoning was that two black men fighting wouldn’t sell tickets.

Sam Langford eagerly pursued a shot at the title but Johnson steadfastly refused, however, this doesn’t tell the whole story. The real reason may lie in a fight that took place two years earlier in 1906 when Johnson and Langford did indeed meet in the ring.

A fifteen round battle resulted in a decision victory for Johnson, who was at the time 29lbs heavier than Langford. Many spectators argued novice 20-year-old Sam Langford had won the bout, and over time this fight was said to be the reason Johnson never agreed to give Langford a title shot, ultimately he was too dangerous and too damn good.

“Sam Langford was the toughest little son of a bitch that ever lived.”

Langford was resigned to the merry-go-round that was the life of a black boxer at the time. Despite his number 1 contender status he had to settle for fights with the best of the rest.

As the years passed Langford’s eyesight was becoming a major issue, unable to see out of one eye, he continued to box and attempted to secure a match up with the legendary Jack Dempsey to finally take a shot at the big prize.

He was refused by Dempsey’s manager Jack Kearns who was looking for ‘somebody easier’. Indeed Dempsey himself claimed he was ‘the greatest fighter we ever had’ and later recalled in his autobiography ….,

“The Hell I feared no man. There was one man, he was even smaller than I, and I wouldn’t fight because I knew he would flatten me. I was afraid of Sam Langford.”

It was a fight against Fred Fulton in 1917 that would have serious career implications. Langford was left with a detached retina, five years later he fought future Middleweight World Champion Tiger Flowers, where he suffered damage to his remaining good right eye.

Unable to see and relying on instincts he launched a huge overhand flooring his opponent. An incredible victory, but at what cost? Langford was urged to quit the ring or face serious consequences, however with little or no money to his name he continued to fight. 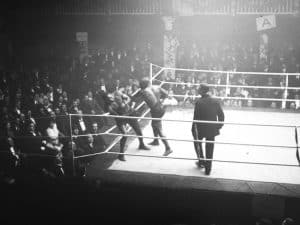 He became the Mexican Heavyweight Champion in 1923 relying on his cornermen to guide him into the ring,

“They matched me up with Kid Savage for the title. I was bluffing through that I could see but I gave myself away. They bet awful heavy on the kid when the word got round. I just felt my way around and then, wham, I got home. He forgot to duck and so I was heavyweight champion of Mexico.” – Sam Langford

Despite his failing eyesight, Langford would fight until the age of 43 when his vision was almost completely gone. His final fight was stopped because he couldn’t see his opponent. There would seem some discrepancy when it comes to how many fights Langford had, but it was certainly close to the 300 mark. He himself once recounted 600 as a realistic figure.

His final years were spent firstly in Harlem, New York, where near destitute he lived in a tiny bedsit, before being located by a sportswriter for the New York Herald Tribune called Al Laney, who was eager to find out what had happened to one of the greatest fighters to ever lace them up.

Shocked and distressed by the demise of this once feared fighter, he published a heartfelt tribute and urged for donations to rescue Langford from his sad plight. Over $10,000 was received which would ultimately see him through his remaining years, where he moved back to Boston to reside in a private nursing home.

Sam Langford had some of the heaviest hands boxing has ever seen, despite sacrificing huge weight advantages to many of his opponents. He knocked out more fighters than George Foreman and Mike Tyson combined, in a career where the title holders avoided him like the plague. He became the first non-world title holder to be inducted into Boxing’s Hall of Fame not long before passing away in 1956.

How good was Sam Langford? Well, one man who shared a ring with him 17 times Harry Wills had this to say, 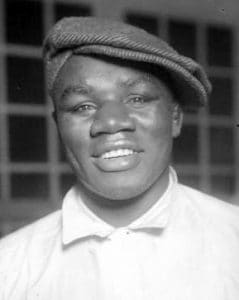 “I was knocked out three times in my career, twice by Langford and in my last fight by Paulino Uzcudun. I still don’t know, except from hearsay, what punches Sam used to knock me out. The first time it happened was 1914. We were supposed to go twenty rounds, when the fourteenth began I was going easy. Sam was in a bad way. I backed him around the ring trying to set him up for a one punch finish. His eye was bleeding and the last thing I remember was having him against the ropes just about five feet from his corner. It must have happened right then.”