Who are the toughest British players rugby league has ever seen? A question you probably don’t ask yourself very often, granted. However, it’s a question that comes up at The MALESTROM HQ quite regularly believe it or not.

Not least because this hallowed sporting endeavour, in an ever-changing world where – social media, political correctness, an obsession with health and safety have all taken precedence – has managed to maintain it’s integrity. In other words, a good old fashioned punch up, or some eyewatering collisions are still par for the course.

Also, in celebration of the last World Cup in 2017, we looked at the equivalent tough guys of yesteryear down under, and many of you wanted to see a British version.

There are so many names we could have mentioned and some of you might think we should, Jamie Peacock is with doubt an absolute beast and one of the toughest competitors we’ve seen, Terry O’Connor took seven of Gordon Taliss’ best before rearranging his face, the list really is endless once you start to do delve.

Anyhow, without further ado, here it is, the list of who we consider the toughest British players rugby league has seen, in no particular order.

An absolute legend of the game and two-time winner of the ‘Man of Steel’ is Paul Sculthorpe. Let it be said first and foremost that Sculthorpe was an incredibly talented rugby player, who was also exceptionally quick and strong.

But when it came down to brass tacks, Sculthorpe wouldn’t take a backward step if he was set upon by a police horse. He could also mix it up, a good example being the 2004 Great Britain test with Australia when he was on the receiving end of a few cheap digs and, well, lost his s**t basically!

To describe former Wigan star Kelvin Skerrett as a big lump, would be an understatement similar to saying ‘this Brexit business has a got a little bit messy’.  This former Welsh international could have a row in an empty room, so you can imagine the carnage when the big hits started flying.

Not even a broken jaw in the 1994 Premiership final between Wigan and Castleford could silence Skerrett who trudged off the pitch spitting blood. Then Castleford coach John Joyner had little sympathy mind,

“He’s given enough in his time… he can’t have any complaints.”

A mountain of a man with a sizeable attitude to match.

St Helens stalwart Alan Prescott is a man who made his name in the game back in the forties and fifties. Now when you’re talking about tough, you can’t have a conversation without chucking Prescott’s name in the hat. 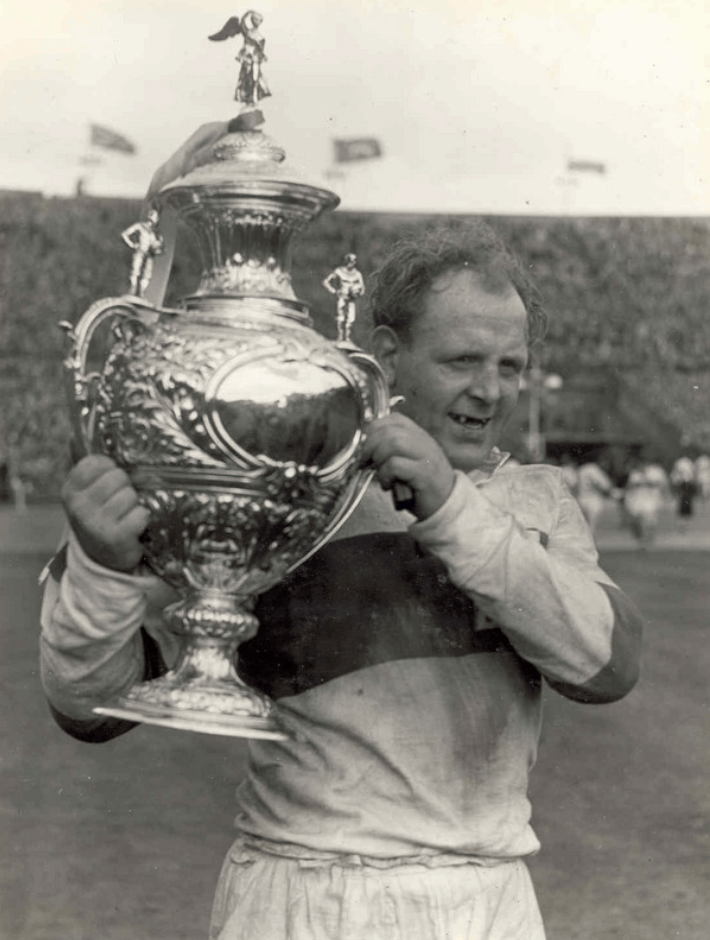 In the second instalment, ‘The Battle of Brisbane’, Prescott broke his arm in the third minute of the game and at a time when there were no substitutes, he remained on the pitch for the entirety of the game, helping Britain secure victory.

He refused a pain-killing injection at half time and swapped sides of the scrum to protect his injured arm. Great Britain manager Tom Mitchell reflected after the game,

“He gathered the ball, he ran, he dictated the pattern of play and he tackled well with his good arm, only those present at the game had any idea of the man’s naked courage.”

His tough-guy reputation really took hold once he ventured down under, playing for Manly in the seventies. Having starred in the Great Britain Lions team that famously won the Ashes in 1970, he also made a name for himself as an uncompromising chap in the World Cup that same year. 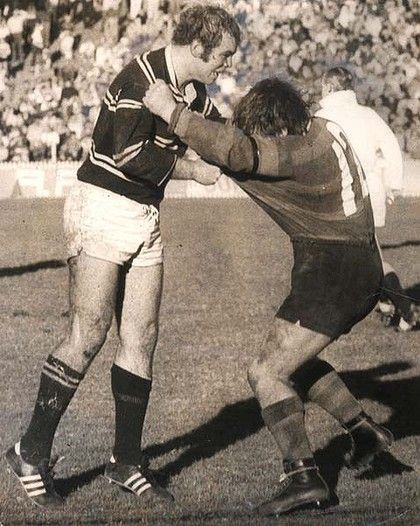 The following year he joined up with Manly, making an immediate impression and according to the man he would have a brutal brawl with, South Sydney’s George Piggins, ‘Reilly pretty much introduced the lethal elbow into football’. Piggins himself was a hard man and the two came to blows in back in 1973. Piggins stated in his autobiography,

“We grabbed each other and there were a couple of headbutts and punches thrown. Meanwhile, the game went on. We had hold of each other at that point and I said to Reilly, “If we carry it on, we’ll be off the paddock. Yeah, he said. I relaxed my hold and next thing he let me have it – a big Liverpool Kiss.

Then it was really on…I had a bit of strength and I was able to fling him to the ground and lob on top of him…I went straight for one of his eyes and I’ll swear I had it out in my hand. Ray Branighan, an ex-teammate with Souths who had joined Manly, ran in at exactly that moment and pushed me, and Reilly’s right eye popped back in.”

Big old ‘Baz’ McDermott is not the type of fella you want eyeballing you in a nightclub. It’s safe to say McDermott is a ‘character’, that’s putting it mildly. It all started when as a young 15-year-old in his hometown of Oldham, Baz was lost an eye after an accident involving a mates air rifle, an incident that left him the subject of cruel playground jibes and any hopes he had of a boxing career in tatters.

In fact, becoming a professional sportsman in itself is quite remarkable in the circumstances, but teenage taunts made him an aggressive man who wouldn’t take a backward step, and a fighter, a bloody good one at that. His battles with Stuart Fielden were the stuff of legend and while accumulating countless red cards, missing over 40 matches through suspension, he epitomised the archetypal enforcer role.

His antics weren’t reserved for on the pitch either, he was the first man in Britain to be arrested by police using CS Gas, outside a nightclub – perhaps they’d been to one of his games. A genuine old school tough guy, whose playing career will be remembered for him taking on anyone, the bigger the better.

“Throughout my career I’ve heard voices in my head saying `hit him, hit him.”

Considered one of the fiercest competitors the game has ever seen, even to this day, the ‘Wild Bull’ as he was affectionately known – unless of course, you’re squaring off against him – the late Vince Karalius revelled in the sheer physicality and abrasiveness of the sport.

When he made his debut for St Helens back in the 1950s against Warrington he did, by his own admission, get a bit of a pasting by the pack that day. Physically immature compared to his aggressive, mature, more experienced opponents, he went away and become obsessed with fitness and putting on muscle, so he never experienced a repeat of that chastening performance.

He also played his part in the very same ‘Battle of Brisbane’ that made a legend of Alan Prescott, himself laying with an injured back and was so impressive, the Australian media gave him his moniker the Wild Bull, after Luis Ángel Firpo who knocked out Heavyweight champ Jack Dempsey back in 1923. Kaalius once told the Rugby League Journal,

“When you think back to olden times, you had the gladiators and the old Romans, the public always liked to see that body contact, they don’t want to see tick and pass. I always enjoyed it more if there was a body or two lying about, it made the job a bit more interesting.”

You can’t have a conversation about the toughest British players in rugby league without mentioning the big man. The epitome of a tough no-nonsense sportsman, Farrell put his body through hell during his exemplary League career making his Wigan debut at the astonishing age of 16 before captaining Great Britain at the age of 21!

And even in those younger years, he was an absolute beast, even up against the gnarled, grisly veterans of the game. There were so many records and achievements, Farrell won 5 Championships and 4 Challenge Cups, 2 Man of Steel and the Golden Boot World Player of the Year in 2004.

A genuine force of nature, Farrell could inspire his teammates with his formidable and unyielding defence, create through his deft hands and willingness to run hard or see out games with his incredible tactical and goal kicking ability. There’s very few Andy  Farrell’s around, on the whole cool, calm and collected, however, he could throw hands with the best of them.

Salford born prop forward Adrian Morley spent 20 years at the top of game bulldozing his way through both the Super League and NRL winning both championships, and, forging a reputation as one of the most uncompromising hardest hitting players to ever grace the game.

It’s saying something when a Pommy heads down under and earns the respect of not only opposition players but fans as well. 11 suspensions in the NRL tell you all you need to know about Moz’s approach to the game.

With more big hits to his name than Stock, Aitken and Waterman, perhaps one of the most punishing is the retribution dished out to Awen Guttenbiel and underlines why Roosters fans used to sing,

“When you’re down on your ass with a face full of grass, that’s a Morley.”

Adrian Morley and his old pal the late great Terry Newton’s idea of a good night out involved sinking a few pints and having a dust-up with some doormen, now that’s two men you wouldn’t want to get in a tangle with.

Of course, there are many more names we could probably should have mentioned. Who makes your list of the toughest British players in Rugby League? Let us know in the comments.