All the latest TV and Movie News

After Swedish brand Fjällräven’s world-famous Kånken backpack was officially designated as craft art a few years ago by Svensk Form, they thought it time to celebrate this achievement – with the launch of two special edition Kånken Art backpacks.

Kånken started life in 1978 as a practical solution to a pressing problem. Back troubles were spreading across Sweden and not just among adults, but children too. This concerned Fjällräven founder Åke Nordin, so he decided to find a solution.

And that solution was Kånken. A simple backpack with space for two A4 binders and a pencil case, that made carrying school gear easier and more comfortable.

Over the years Kånken has become more colourful (there are now more than 50 colour combinations) and more varied, with different sizes and materials (including Re-Kånken, made from recycled plastic bottles); but the basic shape and effortless simplicity hasn’t changed. That, along with its history, has helped catapult it to global success.

It has now become more than just a backpack. It’s an extension of the wearer’s personality. It’s photographed, graphically recreated in art and used as a styling accessory.

So when it was protected by Svensk Form (The Swedish Society of Crafts and Design) as a piece of art, part of Swedish cultural history, Fjällräven felt it was only natural to run a competition on social media encouraging Kånken wearers to share their Kånken Art.

“We were blown away by the results,” says Sarah Benton, Fjällräven’s social media manager.

“Not only was the level of art contributed way beyond our expectations, we also saw the passion surrounding Kånken.” 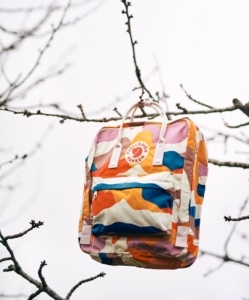 That, along with the designation as art by Svensk Form, is why Fjällräven commissioned Erik and Cecilia to produce Kånken Art prints. Furthermore, one per cent of the proceeds from the sale of these special edition Kånkens will go to Fjällräven’s new Arctic Fox Initiative, a fund that will support projects that protect and preserve flora, fauna and outdoor life.

Cecilia Heikkilä is a graphic designer who, among other things, has written and illustrated children’s books. Nature and animals are synonymous with her work and her “Fable” design is influenced predominantly by Nordic nature.

“To me, the forest and nature are places for unpredictability and coincidence, in both a dangerous and beautiful way. But I believe that the closer we come to nature, the more we want to protect it. This is what inspired my pattern for Kånken Art,” says Cecilia.

“When Fjällräven asked me to collaborate, I immediately said yes. The goal of The Arctic Fox Initiative lies so close to my heart and I’ve always loved Fjällräven, so I’m proud and happy to contribute.”

Erik Olovsson is also a designer working within the fields of product, furniture and graphic design. He runs his own studio in Stockholm, aiming to have an intuitive and experimental starting point for his projects.

“Kånken was always around when I was growing up and it’s deeply rooted in my childhood. So it’s been an honour and interesting challenge to work on this project,” says Erik.

“I have many memories hiking in the mountains with my family when I was a kid. To experience the shifting landscape and the ever-changing weather that created new sceneries in front of us was something grand and meaningful to me. My Kånken Art is an abstract way of describing the layers of nature connected to my own memories of the mountains.” 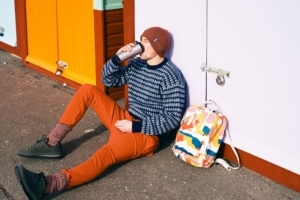 “Kånken has been used as a canvas by many of our fans for years,” explains Henrik Andersson, head of innovation and design at Fjällräven. ”Inspired by this, we decided to launch Kånken editions with original art from some of our favourite creatives. It adds a nice expression to the Kånken packs and we’re happy connecting them to the Arctic Fox Initiative.”

Fjallraven began supporting research into its Scandinavian namesake (Fjällräven means arctic fox in Swedish) through a team of scientists at Stockholm University, led by Professor Anders Angerbjörn. Anders’s research has helped shed light and – together with funding from Fjällräven – awareness on the plight of the Scandinavian arctic fox with many positive effects. Fjällräven hopes its Arctic Fox Initiative can bring about similar positive change in other areas too.

“Since the 1990s we’ve been involved in different projects that support the arctic fox and we’ve learned that climate change is part of the challenge threatening our namesake. So for us it has become a symbol for doing our bit to preserve nature. We figured that we can do a lot, but together we can do even more,” says Christiane Dolva, Fjällräven’s head of sustainability.

“This is why we started the Arctic Fox Initiative, to expand the scope of projects we support and to have it as an umbrella for all our efforts in keeping nature in business for generations to come.”

The first products to support this new initiative will be three special-edition Kånken backpacks, two with unique artist-designed prints and a third with rainbow-coloured detailing.