We’re elbow deep into one of the most compelling World Cup’s in recent memory, partly thanks to the introduction of VAR and also the sheer unpredictability of it all.

Another reason to keep eyes glued to the tournament, especially for the fashionistas, is the dazzling array of brilliant football shirts on display.

One man with a serious passion in this area is Neal Heard, author of The Football Shirts Book and curator of the current exhibition.

At The Art of The Football Shirt, he gets to show off his spectacular collection of jerseys from around the globe. We caught up with Neal recently to talk all things footy kits.

The MALESTROM: Where did your passion for the football shirt begin?

Neal Heard: I can trace it right back and remember the first kits I had, I didn’t really sort of realise how important they were until people asked me.

To be honest with you I think most of us football fans are the same and that’s why this whole exhibition and the book resonates, I’m just tapping into something a hell of a lot of us love. I can remember my first kit as I’m sure we all can, I got a Wales one, the old Admiral one, in ’77, so I’m showing my age.

I also had the Scotland one as I liked Liverpool at the time, I was a young kid who liked the most successful team and I loved Kenny Dalglish. I remember looking at the kit, they used to come in something called an Umbro box set with a little see-through window, I used to look through and see the kit underneath and just loved them you know.

I was really into fashion as I was into football, I was like an 80s casual who liked my clothing, and also you never saw these kits unless you saw someone win the World Club Cup. I remember Liverpool playing Peñarol in the competition and it all seemed so glamorous, so exotic, the shirts were so foreign and different colours from our shirts, I think that’s where it all came to the surface and it went from there. 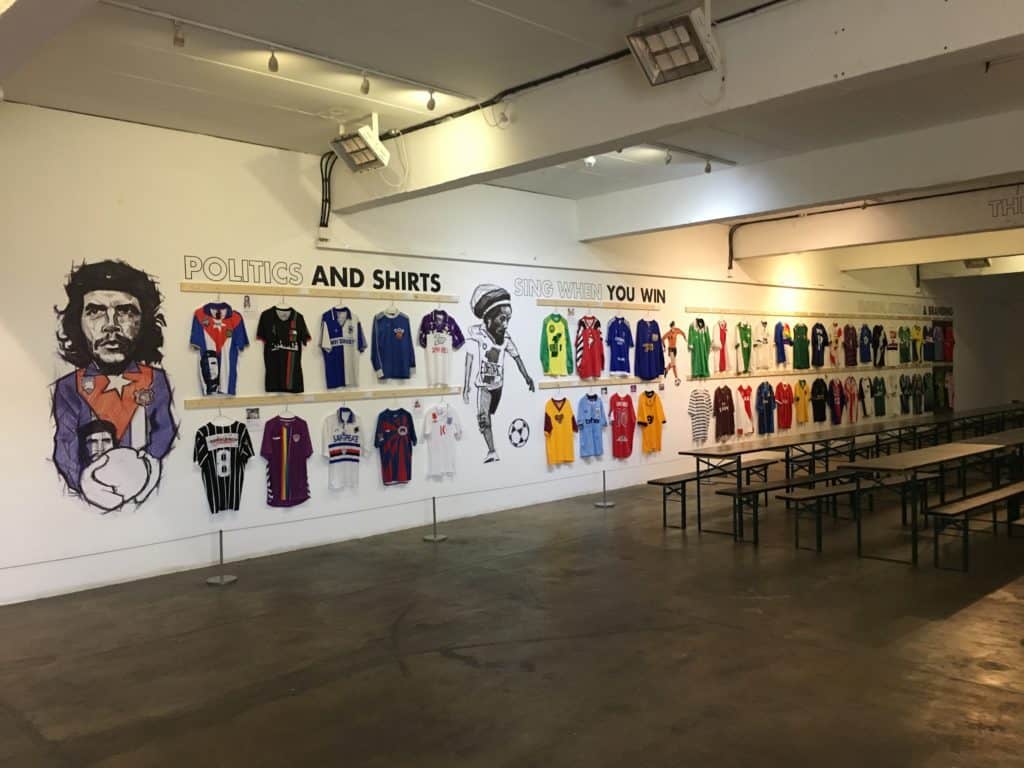 TM: These shirts are deeply rooted in history and tribalism, what’s the significance of the shirts and their emblems?

NH: I think that’s a really good point. There’s a great book called The Soccer Tribe, it’s football from a sociologist’s point of view about how it’s all about tribes, I think it’s totally right. I think that’s why football is so important.

This World Cup shows you that, you’ve got the Panama commentators crying and all the Iranians in tears because they knew they were going out, it means so much more even than club football. It actually represents who you are and where you’re from, your nation, it’s massive. 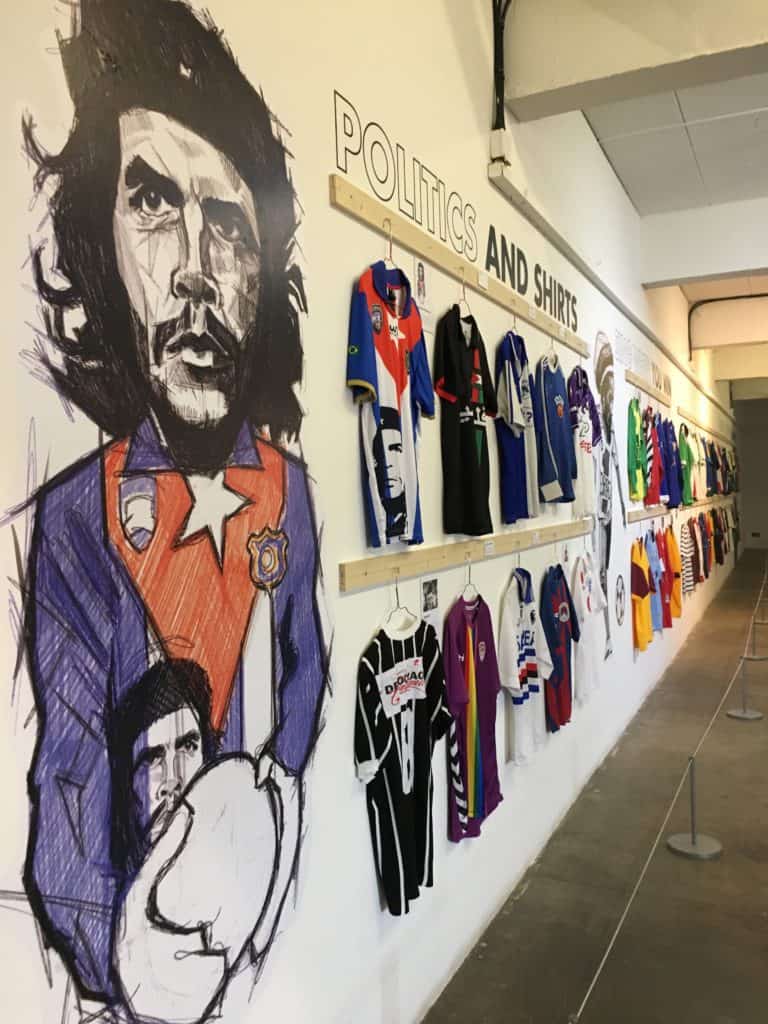 TM: How important is shirt colour to fans? Obviously, it’s set in stone that you shouldn’t change the clubs colours …

NH: I think lately there’s been a bit of a battle going on for football’s soul and I don’t just mean in the monetary terms. But in that clash against us lot who’ve always supported football from its traditional aspect and then you’ve got this commercial aspect with the new fans.

And I’m not doing all of them down, but it’s the new owners as well, coming into it from a franchise system point of view, like many of the Americans who think they can move the team and call it another name.

Look at Cardiff when their owner tried to turn their colours to red, you know. In my opinion, they should be banned from ever owning any club, because if you don’t realise that the clubs badge and the clubs colours are the identity to the City then you’re missing the whole point of football. 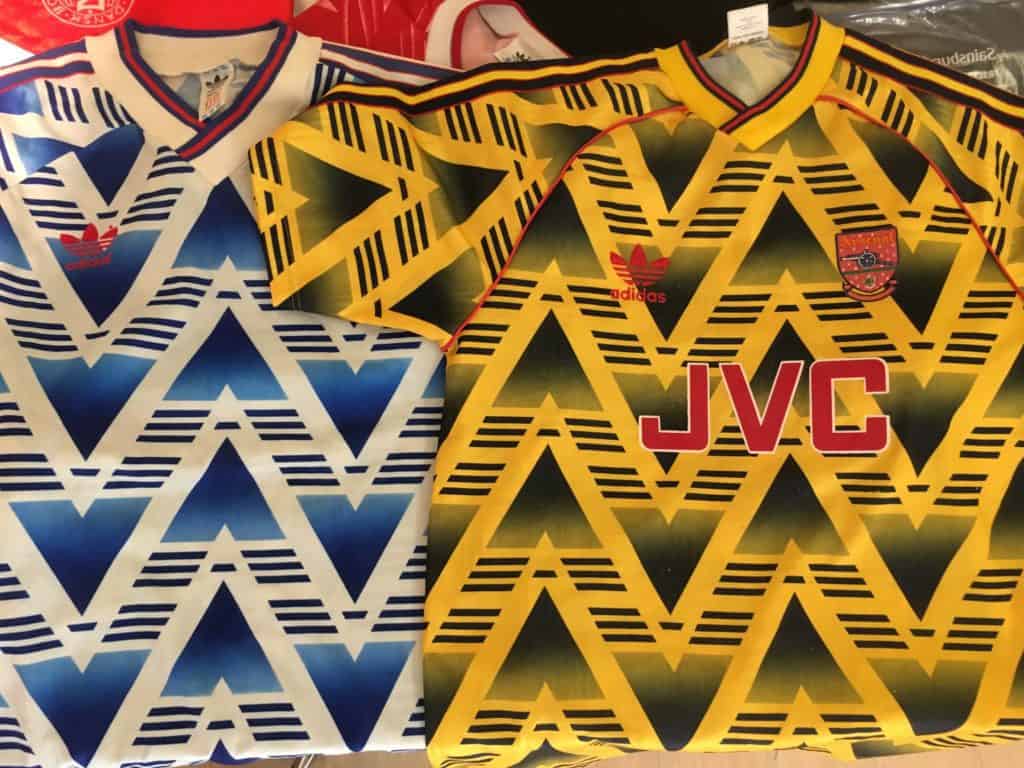 TM: Who actually comes up with these era-defining shirts? What’s the design process behind them?

NH: You know what, unfortunately, I think the people who do it are too far removed, especially at the moment, from that feeling toward the team and there are too many graphic artist kids that just because they’ve drawn kits in your bedroom all of your life and have photoshop, that means you can make a kit.

There are basically design teams behind it with little input from the fans or even the owners. The owners are usually quite traditional and don’t want anyone to play with the designs and the designers then have to have that battle to work it out when they do want to do something different. Like everything, it moves in trends. I mean the Nigeria jersey at this World Cup is a sign they’re moving back to the graphic type kits. 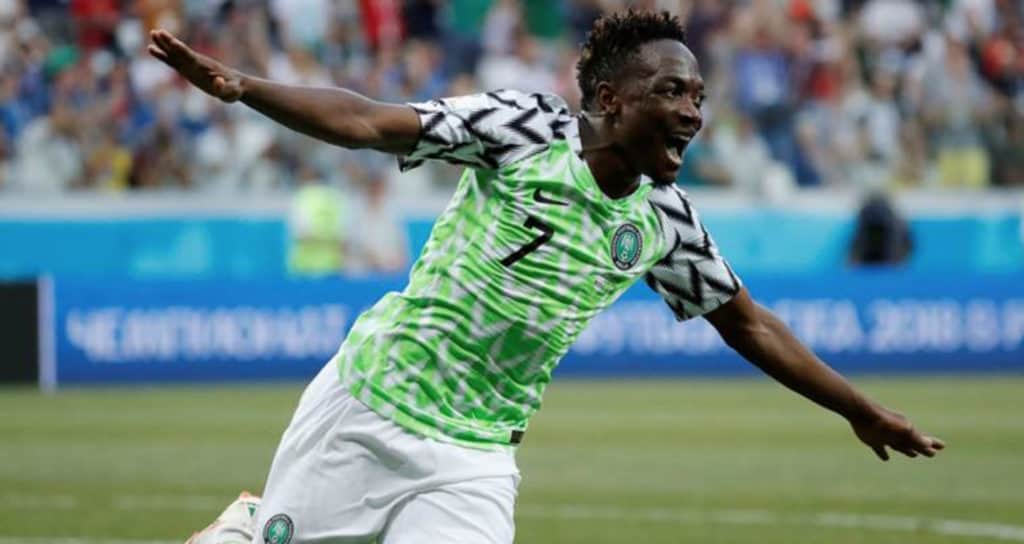 TM: What do you think is the best kit at this World Cup?

I love them, but I don’t like things when you look back and it’s just a re-do of the past, as much as I really like the new wave of shirts Adidas has done, I think it’s semi lazy to go back to a past classic. So for me, the top two would be Nigeria as it’s so different and hits the nail on the head and then Japan.

It’s graphic but they’ve actually thought about it, using the traditional Japanese style of stitching that’s used on a kimono and that’s what we should be doing, making the country proud with the design, not just going retro. 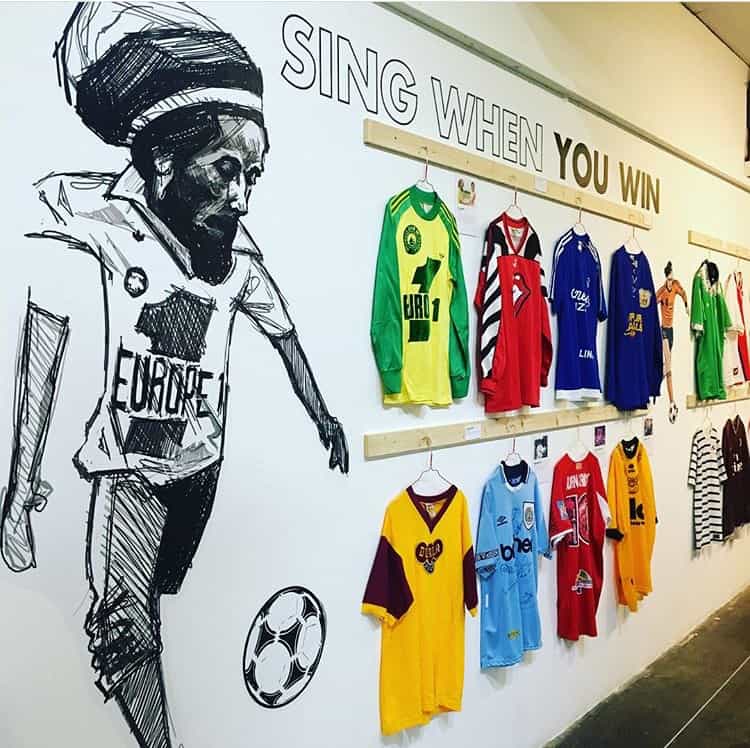 TM: What would you consider the greatest kit all time? Not an easy one for you we’re sure…

NH: Yeah, it’s a tough one isn’t it. There are so many reasons, you can love them just because they’re associated with something. Aesthetically I always loved Sampdoria jerseys, for me, that’s probably the best design of any football shirt in the world, for a team.

They redo it every couple of years and it’s always a brilliant football shirt to look at. I do love the original Belgium ’84, the classic France Platini shirt, the St Etienne 1981 kit. I love seeing Juventus come on the pitch, especially that early 80s era. There are loads of iconic ones, I probably change each day, but those would always come up in a conversation. 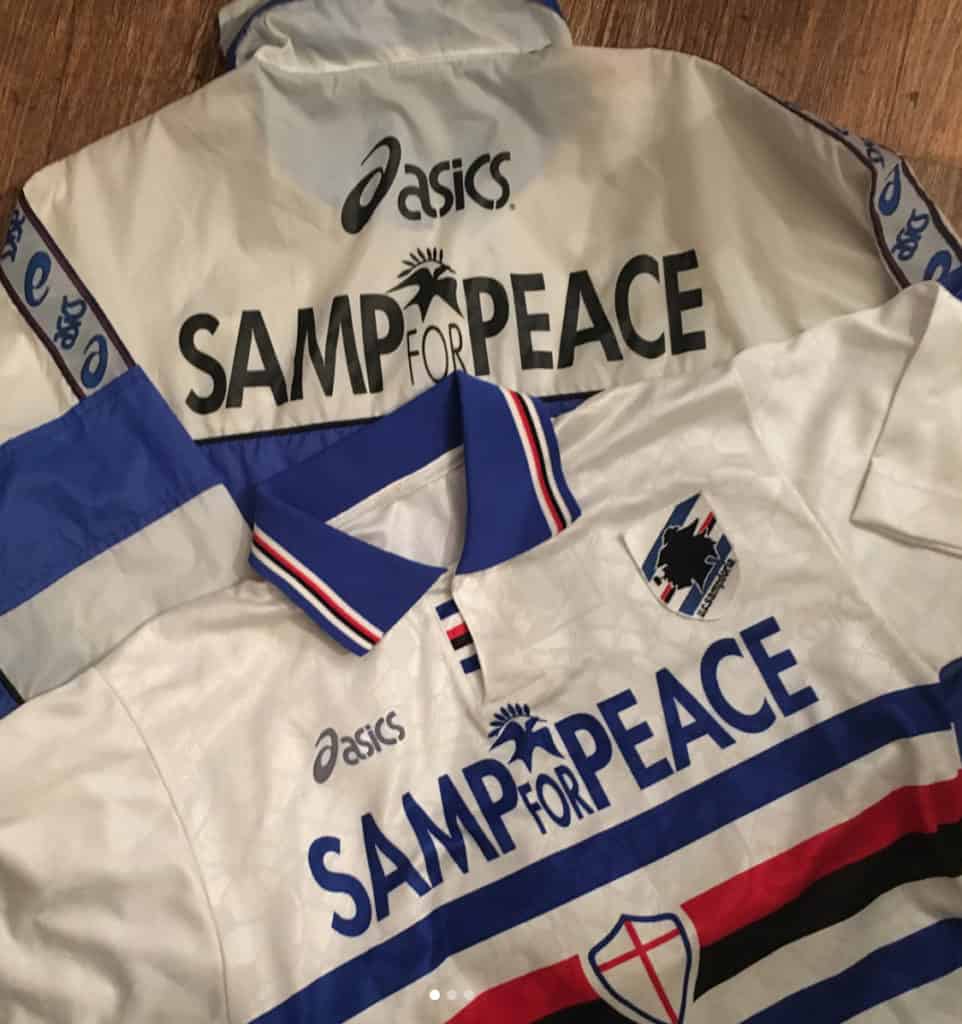 TM: What’s the rarest shirt in your collection?

NH: I’ve got loads of really rare ones, I guess the rarest one is the Corinthians 1983 ‘Democracia’ jersey, which is the shirt that Socrates wore.

He was a real lefty on and off the pitch, he started this movement to get the public engaged with Democracy as Brazil had a despotic regime at the time and also the players didn’t have any rights so he started players unions. He started what was known as the ‘Democracia’ movement and they wore it on the back of their shirts.

I managed to get hold of one of them and they’re supersonic rare as they weren’t replicas, they were players shirts. It’s probably the one I’m most proud to own as I was after that for so long and I love Socrates and love that, football is more important than just football kind of thing. 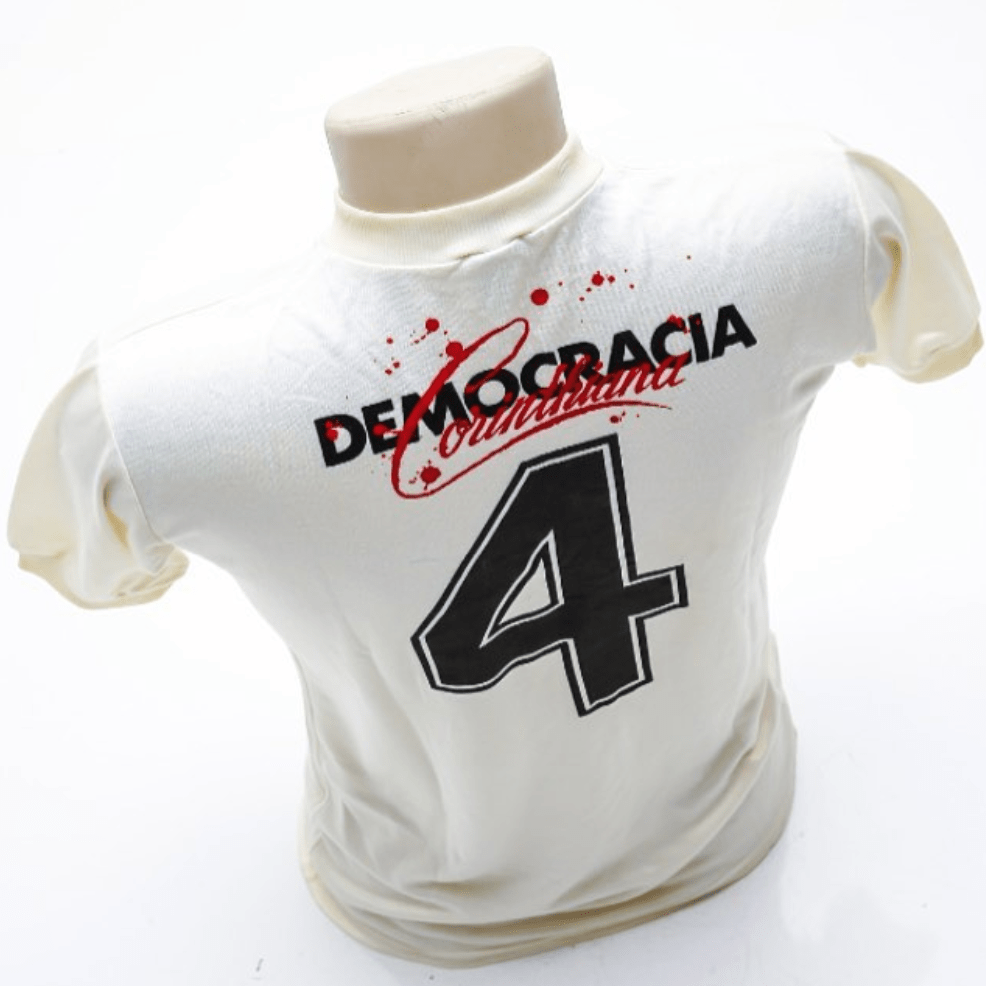 TM: Why do you think football shirts are so popular right now?

NH: I would say this year is year zero for football shirts almost. As in they’re only going to get bigger. Now they’re not just for football fans, they’ve moved over, they’re streetwear, they’re fashion, they’ve crossed over a boundary now where they won’t just stay under the banner of football and sport.

You find them in fashion shops, skate shops and that’s the thing I think is a massive game changer. It’s because they’ve become appropriated by streetwear and not just fans.

The Football Shirts Book by Neal Heard is out to buy now. Get your copy HERE.

There’s still time to catch Neal’s brilliant Art of the Football Shirt exhibition organised by @culture_liverpool at Camp and Furnace in Liverpool. The perfect pre-amble to watching England v Belgium there tomorrow with a pint of local brew. 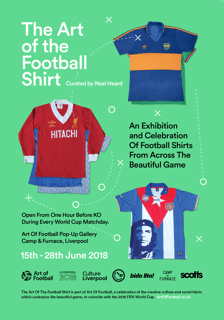