Be it a slight urban myth or not, as the story goes there was a film with an all-star ensemble that was released in 1994, and grossed around $16million in the box office, which didn’t even cover the production costs. By all accounts, it was what can best be described as a complete flop, and was seemingly overlooked maybe through a poor marketing strategy by the great unwashed.

That film was The Shawshank Redemption, it was later released on VHS and became an unprecedented success, receiving unanimous critical acclaim, and to this day regularly described as ‘my favourite film’, particularly by footballers for some reason? It is, in essence, a cult classic.

Often great works of literature and film go unnoticed, unread or watched by small numbers, but as word of mouth spreads they make their way into the expanded consciousness. Here The MALESTROM brings you 5 literary slow burners that went on to become cult classics and a byword for timeless quality. 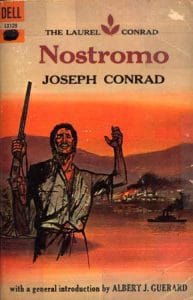 5. NOSTROMO by Joseph Conrad. A monster of a book if there ever was one. It’s captured the imagination of so many people, that its influences go far and wide. The iconic film Director David Lean spent most of his life trying to work out a way of bringing it to the screen he was so smitten with it.

Ridley Scott named the space ship in the first Alien film Nostromo and Francis Ford Coppola took the story and turned it into the legendary Vietnam epic, ‘Apocalypse Now’. Coppola’s wife even made a documentary of the making of the film called, ‘Heart of Darkness’ after Conrad’s other novel, such were the depths of madness that her husband descended into while making the film.

They say the 1904 story of revolution in a republic in South America is the book that defines man’s plight on earth, full of ambition, hate, murder, mayhem, envy and greed. The two main protagonists are Charles Gould, the owner of a silver mining concession in the imaginary Latin American country it’s set in, and the incorruptible and hugely respected Nostromo, who commanded the will of the local people. It’s been hailed the great English novel of the 20th century, so look into it, but we warn you it is not an easy read, it’s a dark, torrid affair and it may take several goes before you reach the end. 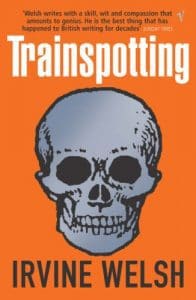 4. TRAINSPOTTING by Irvine Welsh. This was the pugnacious Scotsman’s first ever book. Published in 1993, it’s the Sex Pistol’s ‘God Save the Queen‘ of modern literature. The trials and tribulations of a group of smack heads in Leith, Scotland in the 1980s soon caught on with students and aficionados of irreverent books and became a word of mouth hit.

The characters of Renton, Sick Boy, Spud, Tommy and Begbie soon became ingrained in modern culture through Danny Boyle’s revolutionary and groundbreaking film of the same name. The film was released in 1997 and unconsciously rode the exploding wave of Britpop, becoming a cultural icon of its very own, sending its cast and Director on to Hollywood, and sending Irvine Welsh hurriedly to the bank for the rest of his life. 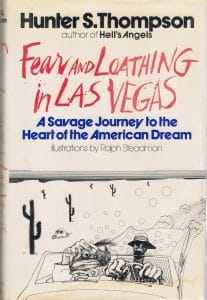 But Thompson was a raving lunatic and he didn’t care. Its lurid drug descriptions of tripping out defy the imagination as we hear the tale of the figures Raoul Duke and Dr Gonzo descending on Las Vegas to cover a sporting event while taking enough mind-bending substances to kill a cart horse. It first started life as a couple of Rolling Stone articles in 1971 and soon went on to launch what was known as Gonzo journalism, a term still used today.

The book is, without doubt, revolutionary and while we may smirk at the extraordinary actions of someone insane enough to consume a carload of illegal drugs while trying to work, the book came to define alternative literature of the 1970s and remains a giant of modern-day books. Read it at your peril, its hard graft and may cause nausea! 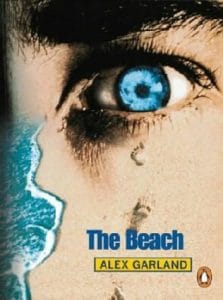 2. THE BEACH by Alex Garland. In the early 1990s, backpacking in South East Asia was an expedition for those in the know and for none but the brave. The culture was virtually unheard of back in the UK, but for those who were doing it, the experiences were unforgettable.

On the routes from Bali, overland through Java, Sumatra, Singapore, Malaysia and Thailand, hundreds of hedonistic and adventurous young people from every nationality in the world searched for the best party, the best grass, the best swimming, the best adventure and of course the best beach to hang out. Anyone on the path could experience live active volcanoes, deep marauding jungles filled with wild orangutans, snakes and hidden tigers. You could bump into ladyboys, prostitutes and drugs on an epic scale without authorities present to interfere.

If you walked along Hat Rin beach on Koh Phangan in the early ’90s, numerous restaurants and bars would sell you speed cocktails to give you eyeballs like sucked-on gobstoppers and a lust to dance, and also serve magic mushroom omelettes, just in case you felt like seeing pink elephants pirouetting along the sand. It was that crazy! You could literally get blitzed on the beach without a care in the world and no one would ever bother you.

When Alex Garland wrote about his experiences in the 1996 novel he captured a movement only known to a few, but which would soon be known to the world. Chaweng Beach on Koh Samui where the main protagonist in the book Richard was supposed to have given the two Americans the secret map to The Beach, became a Mecca for all travellers before they made their way to the soon to become legendary Full Moon Party on Koh Phangan.

The Khao San Road in Bangkok where Duffy gave Richard the map and killed himself became the artery to every Asian destination in the world and soon everyone wanted a piece of the action. Garland’s book exposed an amazing cultural phenomenon. And ironically, when Danny Boyle garnering his second mention on this list decimated the book with one of the worst film adaptations of all time, the backpacker phenomenon went worldwide and became what it is today. Garland’s book was a modern day Lord of The Flies and a masterpiece of modern literature. It captured the zeitgeist which is rare for any author and its why it stands at No. 2 in our top 5 cult books of all time. 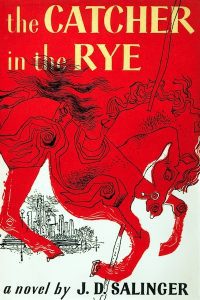 1. THE CATCHER IN THE RYE by J.D. Salinger. The enigma that is the 1951 novel Catcher in the Rye is so enormous it is hard to describe. The simple story of a troubled and disillusioned schoolboy, Holden Caulfield was Rebel Without a Cause before the film was ever made. It was a teen revolution against the establishment, against authority and against phonies.

It was about neurosis, isolation, angst, depression and crippling self-doubt before we even spoke about these things, and it all came from a young teenage boy. It is also the first ever book to be written in such a uniquely personal way that it feels as if Holden actually knows you personally and is telling just you what’s going on in his head like you’re actually with him or the only other person in the room.

Some people hate it, some people love it and some people read it and go on to kill others … like Mark Chapman did to John Lennon while holding the book, such was its influence. The Catcher in the Rye achieved such fame and infamy it sent its author, J.D. Salinger into a life of exile as a recluse, hiding from the entire world for the rest of his days and refusing to ever speak to anyone again.

The reclusiveness of J.D Salinger is so confounding after the popularity of Catcher that it has become the subject of books in itself and newspaper editors anywhere in the world would have cut off their right hand off to get one last interview with him before he died in 2010, alas nobody did. It has been translated into every single language in the world and still sells one million copies a year up to this very day.

It’s hard to sum up its literary status, in some strange way it can be described as powerful, not just because of the story of the lost little boy, but because of its impact on individuals who relate to it. Catcher in the Rye is without a doubt in our eyes the greatest cult book of all time!

Is there a book you would have featured? Have your say in the comments below.