We Asked Dr Rupert Critchley: What Happens To Our Bodies As We Age?

We here at MALESTROM HQ love a good conspiracy chat, what better after a few beers than to discuss some of the crazy theories thrown up over the years. Whether it be Stanley Kubrick directing the 1969 moon landing, Paul McCartney being replaced by a lookalike Beatle after a car crash, or dinosaurs being responsible for building the pyramids (a fave of ours), there’s a mine of material to while away an evening down the boozer.

One particular take on one of the most tragic maritime disasters in history has kept cropping up over the years, so we thought why not bring it to your attention so you can make your own minds up. This is the case of The Titanic having never actually sunk.

We all know the ill-fated story of The Titanic, unfortunately most through Winslet and DiCaprio’s epic, or should we say vomit inducing love story set to Celine Dion warbling about hearts, rather than other accounts. But were things all that met the eye when it came to the luxury liner? When Robin Gardiner wrote the book Titanic: The Ship That Never Sank, he came up with an argument that got a lot of people talking.

Gardiner raised suspicions that the ship that actually went down on that tragic night of 14th April 1912, taking over 15,000 poor souls with it, was in fact sister liner The Olympic.

His theory was that the man who’d taken over as owner of the British Shipping Company the White Star Line, American financier J.P. Morgan, under the company International Mercantile Marine Group, had organised for the almost identical Olympic to take the place of Titanic for her maiden voyage and be sunk as an elaborate insurance job.

Around seven months before the disaster on 20 September 1911, the Olympic had a collision with the Royal Navy Warship HMS Hawke in Southampton while under the command of a harbour pilot. The crash caused extensive damage to the ship. An inquiry blamed the Olympic for the incident due to her scale, despite many eyewitness accounts saying otherwise. Allegedly Lloyds of London, the liners insurers, refused to pay out because of the inquiries findings.

This left the White Star Line with a problem, they would have to send the Olympic back to the shipyard for repairs, and work that needed completing on the unfinished Titanic would be delayed even further. Gardiner proposes that to prevent the financial disaster of both liners being out of action the decision was made to patch up the Olympic and turn it into the Titanic.

Then once the build was complete on the new vessel that would set off cruising under the Olympic’s guise. The old switcheroo.

In his book Gardiner writes about few parts of either ship bearing the Titanic name, apart from the items that were easily changeable such as bells, lifeboats, and nameplates. All the other fixtures and fittings were standard issue White Star which all the other boats in the fleet used.

Another of the clues as to the Titanic not being the genuine article that Gardiner allegedly discovered was the way it sailed. During the collision with the warship the central turbines mountings of the Olympic had been badly damaged and the keel (the big fin below the boat) had been bent, which gave the ship a slight permanent list to port.

A similar list was noticed by passengers as she set off from Southampton on her fateful ‘maiden’ voyage. One survivor of the disaster, Lawrence Beesley went on to write this about the ship’s leanings,”I then called the attention of our table to the way the Titanic listed to port (I had noticed this before), and we watched the skyline through the portholes as we sat at the purser’s table in the saloon.”

Gardiner went on to write that the plan was to dispose of the badly damaged Olympic, in a way White Star were able to collect the full value of a new ship through their insurance. Insurance they ramped up from $7 million to $12 million a week before departing Southampton’s docks. Nothing suspicious about that. He theorises the seacocks were to be opened at a point out at sea to slowly flood the ship, with a number of other vessels stationed nearby to save passengers.

The famous shortage of lifeboats would not be a problem due to all the boats available to make rescue. Obviously, if this was the plan it didn’t happen.

Gardiner writes about First Officer Murdoch being on the ship’s bridge, despite not being meant to be on duty, because he was one of the few high-ranking officers apart from Captain Smith (the man responsible for damaging the Olympic) who had intel about the supposed plot, and was keeping watch for rescue boats.

Here’s another mind blower from the book. The ship never hit an iceberg!! Rather it struck an IMM rescue ship with it’s lights out. Gardiner didn’t believe a steel double-hulled beast of a ship like said liner could have been damaged so badly by a big lump of ice.

Other theories outside of this book point the finger at J.P. Morgan. A man doesn’t get to be one of the most powerful financiers, with a huge company still bearing his name, without getting eliminating some of the competition. Some of the richest men in the world were aboard the liner from J.J. Astor to Benjamin Guggenheim, serious movers and shakers in big money.

Men who may well have opposed Morgan’s creation of the Federal Reserve bank, which he had a hand in, had their lives not been lost. It certainly seems convenient that having been booked on the ships maiden voyage he cancelled and travelled to the French resort of Aix-les-Bains instead. Luck? The inventor of the radio Marconi and other eminent passengers such as the wife of the chairman of White Star Liners also cancelled at short notice. Did they know something others didn’t? 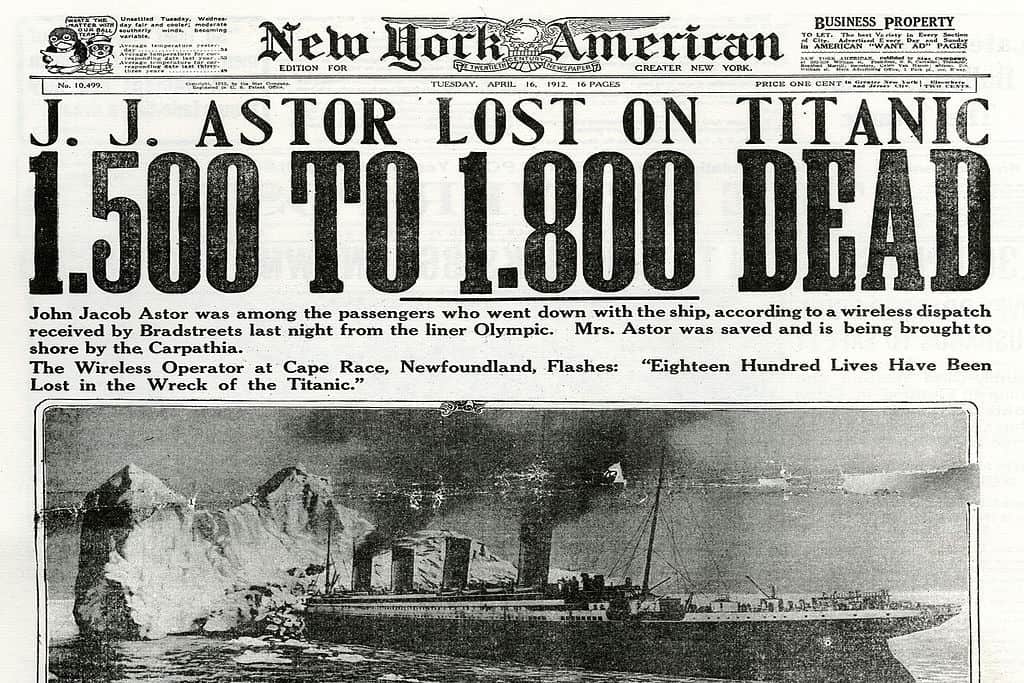 And what to the ultimate fate of the ‘real’ Titanic. Gardiner in his book said that under the ‘Olympic’ name she served for 25 years before being scrapped in 1935.

Does The MALESTROM believe all these madcap theories? Maybe not, but there is plausible evidence out there and in this world things are often not what they seem. One thing we will say is be sure to question absolutely everything in life, the truth is out there… somewhere.