Who Fancies a Roller Coaster Ride Through India?

The steady increase in life expectancy in Britain has stalled in recent years due to austerity and the significant cuts in the NHS. According to the Office of National Statistics the most recent trend for life expectancy of a man and a woman in Britain based on analysis gathered in 2015 was 79.1 years for that of a newborn baby boy, compared with 82.5 for a newborn baby girl. This would indicate that the gap which in the past has been significantly greater is narrowing.

We here at The MALESTROM would like to know, given us men are losing an age battle of sorts, exactly what happens to a man’s body as he ages? Turning from sprightly energetic twenty-year-olds burning the candle at both ends, to a stiff jointed, balding, more mature fellow, seemingly out of nowhere.

Can we delay the onset of old age? And what the hell happens to our bodies decade to decade? In search of this knowledge and hopefully the elixir of youth we spoke to expert Dr Rupert Critchley to get the lowdown.

Dr Rupert: It’s not so much a case of how we age, but how long we are living that’s really the point here. There is proportionally a greater elderly population compared to many years ago. According to national statistics From 2012 to 2032 the populations of 65-84 year olds and the over 85s are set to increase by 39 and 106 per cent respectively. We will see a growing elderly population with the top three reasons being food supply and nutrition, health and hygiene.

Physical changes as we age

Lifestyle factors remain equally important throughout i.e. exercise / diet / sun exposure / stress – all of which have a negative impact on the body and will accelerate physical changes.

Although peak physical fitness is often reached in our 20’s, changes as early as this result in the initial signs of ageing and these are not only skin deep. Peak bone mass is reached by around the mid 20’s while metabolism begins to slow down and testosterone levels begin to drop by the mid-thirties.

At 30+, the balance between muscle build up and break down begins to tip towards the ‘breaking down’ end of the scale and male pattern baldness will be more prominent due to fluctuating hormone levels. 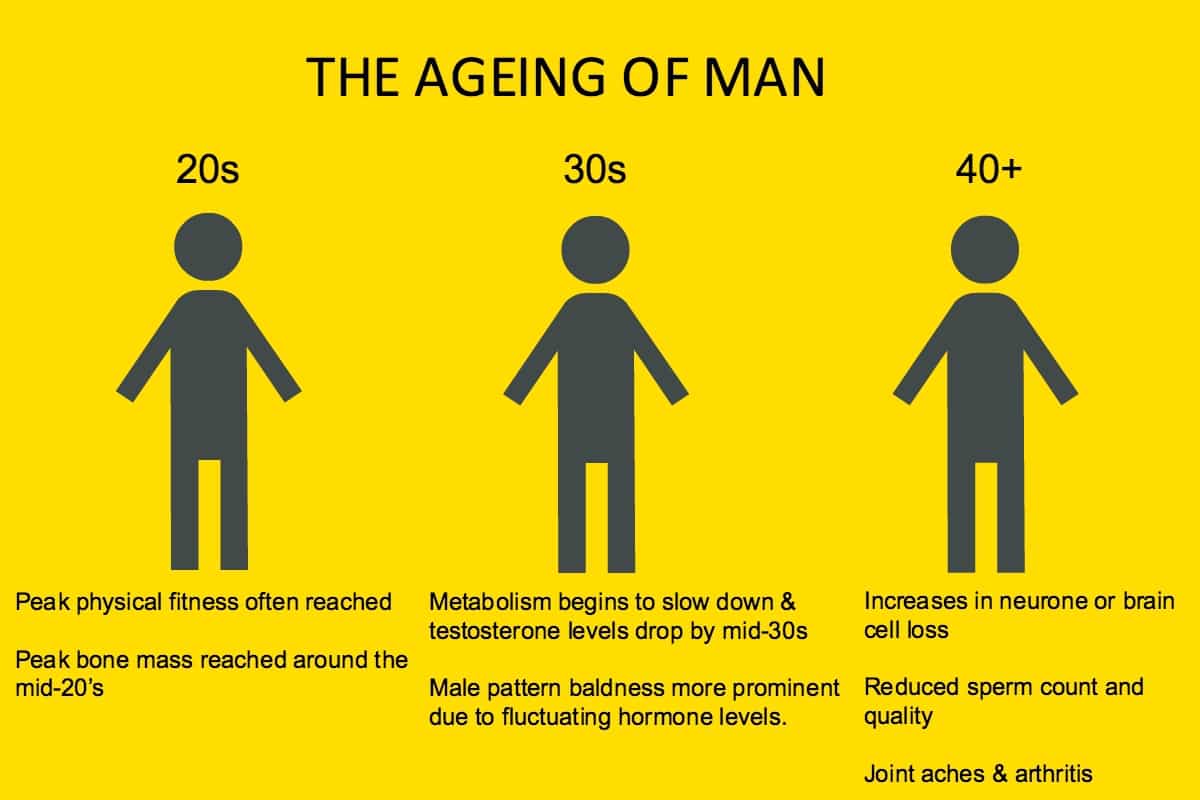 As the decades go on, increases in neurone or brain cell loss, reduced sperm count and quality, joint aches and arthritis, worsening vision, enlargement of the prostate, narrowing and build up of fatty deposits of the arteries leading to increases in blood pressure, delayed wound healing, worsening taste and smell are all some of the significant signs we are likely to face.

Generally most of our bodily functions slow down over time. Cellular regeneration and turnover result in a delayed ability to repair and heal. Lifestyle factors such as diet, exercise, stopping smoking, reduced alcohol intake and stress are the most important contributory factors in maintenance of our bodies. Metabolic rate and bodily functions decline with age. The scale is tipped towards muscle breakdown, rather than muscle building, resulting in general deterioration in muscle mass.

Interestingly noses, ears and any part of your body that consists of cartilage tends to keep growing with age. Gravity also results in ‘sagging’ and therefore these parts of the body appear larger over time. We also shrink, as the disks between the bony spine and our skeleton loses mass so does our height. Loss of neurones or brain cells over time can lead to memory impairment. Male pattern baldness due to fluctuations in hormones affect hair in certain areas such as our heads, but not other bodily hairs such as nose and ear hair.

The Future and what you can do

Maintain 30 minutes of brisk exercise on at least 5 days of the week and eat a balanced diet in order to ensure sufficient nutrition. Sleep is essential throughout our lives and maintaining 8 hours a night can result in significant and positive effects on both our physical and mental health. Throughout the decades, we require the same amount of sleep to ensure normal bodily functions however general sleep quality and ability to initiate sleep can decline with age. 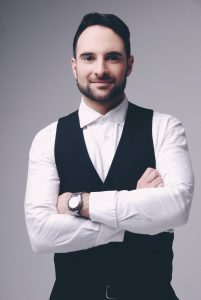