Like the global bloodbath of just over a century ago, the corona conflict is looking more like a war of attrition than a quick, clean fight. Loosening of restrictions has brought renewed upsurges, and fears of a deadly second wave. As our Political Correspondent Peter Spencer reports, a certain E-word is hovering over many people’s lips.

The words from Joni Mitchell’s 1966 hit song, haunting enough at the time, have a lingering poignancy today.

As millions of Brits find themselves at least semi incarcerated, again, and millions more despair of jetting off to the sun, or of getting home without a whole heap of grief, there’s a feeling coming back and back.

Don’t whisper it too loudly, people might hear. It’s getting EXASPERATING.

The words of another song, this one harking back to the Battle of the Somme in 1916, also resonate.

That was about collective exasperation as much as grief at wholesale slaughter. A sense of being stuck in some hideous rut while the powers that be hadn’t a clue about anything.

And today, with the Office of National Statistics reporting that England suffered the highest levels of excess deaths of any country in Europe over the first half of 2020, tragedies abound. Also, huge numbers of British people and companies face an uncertain financial future.

But, as fears mount of a Spanish flu-style second wave, we’re all learning to live with the sheer dreariness of having to look like overblown grasshoppers in shops, and being put off going down the pub by the sheer palaver of trying to order drinks.

So, meeting with friends, the corona conversation always crops up at some point. Like the what the hell’s she done now question about some nutty auntie who’s always embarrassing the family. Doing annoying things, like eating the neighbour’s cat or whatever.

Yet there are already definite outcomes emerging. Some of them really quite good.

In anticipation of a longish haul, Sainsbury’s is testing a virtual queueing system that’d let punters wait in a car or café instead of freezing their whatsits off or cursing what the rain’s doing to their hair.

Face it, this stuff matters. Though possibly more to some than to others.

But the normal winter flu spike troubles anyone who gets it, and could overwhelm the NHS if there are loads of Covid-19 cases at the same time.

Which is why the government has announced a big boost to the vaccination programme this year.

Against that, it probably won’t be needed if what’s happened in the southern hemisphere is anything to go by.

Because their seasons come in the reverse order to ours, meaning they’re just out of the coldest period, you’d imagine they’ve had a particularly tricky few months.

But in fact they’ve experienced a strikingly small number of flu cases. Largely because, experts say, of the beneficial effect of social distancing.

In Australia for example there were only thirty-six deaths from flu in the first half of this year, less than a tenth of the normal figure. And in Chile the reduction’s been nearly twice as big.

North of the Yankee border, however, the news is relentlessly appalling. Though the United States has less than five per cent of the world’s population it’s suffered almost a quarter of its coronavirus fatalities.

A baffling statistic, considering what a clever man they have at the helm. Also a potential complication for the presidential election coming up in November.

Undaunted, however, The Donald has come up with the most brilliant wheeze ever. Delay the poll. Here’s how he tweeted the suggestion: 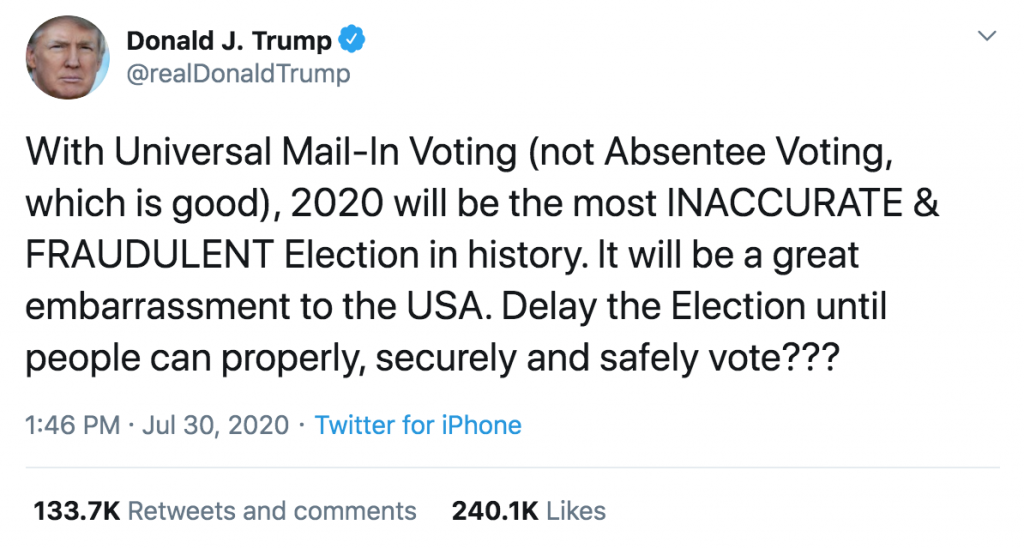 Turns out, regrettably, Mr Trump’s in a minority of one on this, with even his own party saying it’s pants. Still, you have to admire his spirit. After all, one should never let reality get in the way of a good world view.

And it’s doubly unfair, when you consider that Vladimir Putin managed to fix his own President For Life ticket. Good spell in the KGB, maybe that’s what The Donald needs.

More modestly, and with every chance of success, Boris Johnson’s also had a US import-style idea stemming from the corona commotion.

He’s judged the daily televised pandemic press conferences to be such a success that he plans to make them a permanent fixture.

This story may sound a bit Westminster bubbly, but it will change the face of British politics. And certainly the face of whoever lands the hundred-grand-a-year job will become better known than that of pretty much anyone in the cabinet.

Pretty may be an operative word here, as Bojo wants to prove he does not have a ‘woman problem’ by ensuring the successful cabinet is female as well as telegenic.

The commons speaker, Sir Lindsay Hoyle, is not happy. Nothing to do with the gender agenda, but everything down to parliament being sidelined.

‘Statements should be made to the House first,’ he fumed this week. ‘Once you’ve made that statement, by all means go and have a press conference. But do it after, not before.’

The role could also be a poisoned chalice for whoever lands it, as she’ll be permanently tarred with the Johnson administration brush.

A bit like the stars of the iconic Carry On movie series, forever typecast as comedy actors, even though many went on to play more heavyweight parts.

However, it will look like open government. The polar opposite of half a century ago when lobby journalists like yours truly filed into the front room of Number Ten and made ourselves comfy on squidgy sofas.

We then pretended we were frightfully clever, giving non-attributable insights into what we knew and no one else did about what was really going on.

However, a word of warning to applicants for the job. Margaret Thatcher’s press supremo Sir Bernard Ingham titled his memoir ‘Kill the Messenger’.

And at last year’s Christmas party for political journalists Bojo’s strap-on brain, you know, Dominic Do-As-I-Say-Not-As-I-Do Cummings, was asked what he wanted to do to the Lobby.

He didn’t say anything, and nor did he need to. Moving his index finger from left to right in front of his neck conveyed the message perfectly. A once in a lifetime delight that, getting your throat slit.