The Shining Has Had a Comedy Makeover

All Hallows Eve is fast approaching and people worldwide are looking to get their scare on. But these days your traditional Trick Or Treat is being overtaken by a more sophisticated, more immersive experience. Scare attractions are doing huge business across the world, particularly in the US. In America for at least one month of the year punters are paying to have the wits frightened clean out of them.

The attractions range from the fairly timid to out-and-out torture with some of the most extreme subjecting people to the likes of sensory deprivation and faux waterboarding for the ticket price. Each to their own, we’re not judging. Recent horror films such as The Houses October Built even borrow their plot from the phenomenon of these terror attractions, further illustrating their boundary pushing and rise in popularity.

Of course it’s not just in the States where you can be scared senseless for fun, the UK is rapidly catching up with spooky sites popping up the length and breadth of the country, often in the most unlikely of locations. From old warehouses to disused tunnels and in one particular case an overgrown former zoo. And rather than a bunch of monkeys this zoo just happens to be inhabited by a rather terrifying zombie horde.

In the name of all things horror The MALESTROM bravely ventured to the North West of England to Pleasureland set in the pretty seaside town of Southport, home to After Dark an attraction featuring so called scare houses headlined by the adrenaline-inducing thrill that is the Zombie Zoo. The park owner Norman Wallis told us about his vision:

“I realised we need to do something to extend the season, and I said we should do Halloween. I thought … I want us to become Halloween capital of the UK. I went round the zoo and thought what can we do with this? The place had started to decay and was already pretty creepy … we’re using the cages that were already there. I mean it’s different isn’t it? A lad peed himself in there the other night”.

And who can blame the lad, as The MALESTROM would later find out there are definitely more attractive prospects than a late evening stroll (make that dash) through an overgrown menagerie infested with zombified actors far more rabid and wild than the zoo’s former caged inhabitants. Although once you’ve gone through it, you won’t be forgetting what happened for a long time, and on the whole in a good way.

You might ask what kind of crazy wants to scare people for a living? We spoke to one actor, Creepy Clown, or Rebecca to her friends, from the Ghost Train Walk, to ask what possesses her?

“Getting that reaction from customers is such a buzz. I do a lot of children’s entertainment. I’m trained in musical theatre, so I’m more used to doing jazz hands, but doing the scare work has been really, really fun. I try and freak them out as much as possible. If I hear them say a name, like ‘Mike look at her’, I’ll be like ‘hello Mike’. I get in their head and freak them out”.

We asked her whether she’d ventured into the creepy confines of the zoo?

Turns out its no place for clowns. Indeed no place for any faint of heart. After being fortified with a stiff drink it was time for The MALESTROM to become immersed in the madness. First stop was the Ghost Walk inside the site of the Ghost Train and former funhouse. But traditional fun this was not. 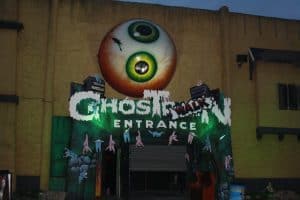 We were informed by the very welcoming Operations Manager Andy that this was the tame one. But his standards may differ to others. It turned out to be a claustrophobic nightmare played out often in near pitch black, in tight corridors, packed with actors who’ve clearly gone the method route in taking on their demented characters. It was clear on exit The MALESTROM may have bitten off more than we could chew.

Before much-needed breath could be caught it was off to the Horror House. Let’s just say if you’ve been unsettled by the recent spate of clown sightings you may want to give this place a miss. It was actually a relief once in there to stumble across the familiar face of Creepy Clown Rebecca, although any relief as ever in these surroundings was predictably short-lived. The final escape from the confounding hall of mirrors was met with celebration. But again there wasn’t much to cheer as the final stop on this journey of horror would be the main event … the Zombie Zoo!

On the way to the compound Andy spun us tales about what he’s heard goes on within the caged walls, further increasing the anticipation and fear, although he openly admits he’s yet been too scared to run this particular gauntlet. Once the large wooden entrance gates were reached, it was time. A slightly unnerving man greets you with a thousand yard stare before a solid thump on the gates summons two extremely realistic zombie hulks who quickly place a bag over your head and lead you in darkness to your simulated nightmare.

What goes on after this needs to be kept secret so as not to ruin the surprise for any daring souls willing to take up the challenge. But suffice to say you’ll meet a doctor with a screw as loose as possible, more zombies than in your local shopping arcade on a Saturday afternoon and we won’t even mention chainsaws!

Rest assured a trip to Pleasureland’s Zombie Zoo will see you thoroughly looked after and thoroughly terrified all at the same time. As an attraction it stands up there with the very best the UK has to offer.

Ever on the lookout for another money-spinner park owner Norman has thought of another way to make a few quid off the back of the attraction.

“I thought about setting up an underpant shop at the exit”.

That might just be a good move because there’s no knowing how you might react once you visit the living breathing horror that is the zombie zoo!

Visit HERE to book or just turn up on the night. Entry to Pleasureland is free. You can pay as you go for scare attractions or take on all four for £25.