Is it a Bird? Is it a Plane? No it’s a Lego Superheroes Exhibition

Some of our older readers may remember a simpler time when there were only three TV channels, watches doubled up as calculators and blancmange was an actual desert. A time when Blondie, Michael Jackson and Billy Joel to name but a few would battle it out at the top of the charts and Trivial Pursuit would separate the wheat from the chaff, It’s the 1980’s of course!

An age when the phrase Vorsprung Durch Technik made it’s way onto our screens signaling the arrival of the Audi Quattro. The MALESTROM’s resident car buff Frank Evans gives us the lowdown on this stylish set of wheels.

The Quattro started life as a rally car. It benefited from new rules that allowed four-wheel drive (FWD) cars to enter rallying. Before the Quattro, your normal four-wheel drive car would be big and boxy, like a Land Rover or a Range Rover. The Jensen FF Interceptor from 1966 was the only other car to come with four-wheel drive, however, Jensen was a low volume car maker. 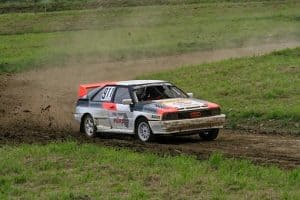 The Quattro was considered quite ground breaking when it was launched in 1980 as it was the first mass produced car to have permanent four wheel drive and the first FWD car to have a turbo charged engine. As a result the Quattro did rather well by coming 1st in its class 2 years on the run.

The car itself looked stylish and modern and was crafted in Germany, however the respected British designer Martin Smith was responsible for its flared wheel arches that gave it that 1980’s look.

The Quattro had a 5 speed, 2.1cc engine which developed 200bhp and a top speed of 135 mile an hour. 0- 60 time was 7.1 seconds. The car looked different inside too as it has a LCD dash board as apposed to the normal white dials which were previously the norm. The name Quattro is taken from the Italian for the number 4 and refers to its four wheel drive system.

You may well ask what’s the big deal with four wheel drive? Well for a start, it made the car more stable which probable helped push the rally car drivers to make the car go that little bit closer to the limit. As a result there were rally wins for Audi in 1981 and 1982 with 1984 being their most successful year in rallying.

Now for the technical bit from the boffins at The MALESTROM. The thing that made the Audi Quattro stand out was the new way the four wheel drive was applied to the car. Previous FWD cars used in the likes of the Range Rover had a transfer box. This was a second gear lever in the car. The transfer box switched the torque from normal to a low ratio.

This meant for example, 3rd gear in low ratio would have the same torque as 1st gear in normal. It was quite possible to drive a car from start in 3rd gear if it was in low ratio. It would be useful in climbing up steep inclines. The problem with these bulky off-roaders was that this added weight to the car which would affect performance, something you would not expect from a hot hatch.

The engineers at Audi made use of the central differential to allow FWD in a smaller car. The differential is a component which allows the engine torque to be divided between the wheels. Normally a FWD would have a differential on each axle (front and rear) but Audi managed to locate it within the gearbox.

This system was much lighter and more efficient and meant the car had better stability and grip.  It sounds like the engineers must have had a tough day at the office as when it came to naming the new system, they simply called it quattro (small q). So the Quattro had the quattro system.

A 2.2 litre engine was later added to the range which gave the car 220 BHP and a new top speed of 143 miles per hour. Apart from minor changes inside the car, the Quattro stayed pretty much the same until production came to an end in 1991 when it was replaced by the A3. Total numbers made were just over 11,400. The Quattro name still lives on in current Audi models but is reserved for the sportier models.

The Audi Quattro would certainly be a car to be included in a list of things that made the 1980s an exciting decade which may explain why years later, when the BBC were making the hit show Ashes to Ashes, they used a red Audi Quattro as the car of choice for DCI Gene Hunt.

The car was a celebrity in its own right with fans looking forward each week for DCI Hunt’s catch phrase, ”fire up the Quattro” when they where about to go out and make an arrest. I suppose it was more cutting edge than Holmes saying “The game’s afoot Watson”.

There were 2 Quattro’s used in the TV series, which ran from 2008 to 2010, the second car being reserved for stunts. The Quattro made a further celebrity appearance in 2010 but in a different format. It was the 2010 General Election in the UK and the Labour Government decided to run a poster campaign with David Cameron’s face imposed over Gene Hunts body. He was sitting on the bonnet of the iconic Quattro.

The caption advised the electorate not to allow Cameron to take Britain back to the 1980’s. The Conservatives liked the poster so much that they made their own version of the poster with the caption “Fire up the Quattro, its time for change”.