The latest lockdown looks like it’s working. And the official vaccination target may actually be hit. Yet UK has more new Covid-19 cases per head than any other major country in the world. And, as our Political Correspondent Peter Spencer reports, while government departments are at odds over schools’ reopening, Tory MP’s are divided about Boris Johnson’s leadership.

It’s said when German Panzer divisions rolled into Paris in 1940 French politicians fell to squabbling about whose idea the Maginot line was.

Scroll forward to here and now. And as Covid-19 continues to break fatality records, as well as hearts, disagreements abound about whose fault that is, as well as about what to do next.

The good news is the government’s as confident as it makes out that the fifteen million most vulnerable of us really will get the jab by mid February, and everyone over fifty will be sorted by the end of March.

Meaning we can get the kids back to school after half-term, according to Downing Street. Except that we can’t, according to the UK’s regulator, which fears the vital thirty-minute tests can’t be trusted.

Still, the infection rate since we shut up shop yet again has dipped in most places. According to boffins at Cambridge Uni, ‘the strongest evidence yet that lockdown is working.’

Yet there are dozens of Tory MP’s who still say the whole idea sucks. A couple have even handed in letters of no confidence in Boris Johnson.

No big deal at this stage. Yet the rebellion’s likely to get an awful lot bigger if restrictions aren’t loosened in the not too distant future.

This in spite of poke-you-in-the eye proof that they do make a difference.

Until recently the good people of Cornwall could frolic around in the delicious freedom of Tier-One restrictions. Little short of licence to have group sex in public places, all things being relative.

And now they’re paying the price. With a hundred-and-twenty per cent leap in corona cases. Oops.

So we live and learn. And change our minds.

Remember how ‘herd immunity’ was a Good Thing. Until it wasn’t. Well it is again now. Get used to it.

And the few who do cop it twice don’t get it anything like as badly second time round.

Ergo, says Susan Hopkins of Public Health England, ‘it will help alongside the vaccine to give a level of immunity and protection that will start to reduce transmission.’

And this benign trend may travel further and faster than you’d think. New modelling suggests one in five people in England may have had corona, rising close to one in two in some areas.

Funny how fashions come and go. Think Lady Bracknell in The Importance of Being Earnest.

‘Style largely depends on the way the chin is worn. They are worn very high, just at present.’

Chin up, everyone. Happens there’s a little bit more good news around.

A large-scale trial’s under way of a new treatment that looks likely to cut the odds of corona patients getting seriously sick by eighty per cent.

All they have to do is inhale the protein interferon beta, which stimulates the immune system, and hey presto their bodies do the rest.

Didn’t come soon enough though for Marianne Faithfull, the sixties icon who incidentally hates that tag. But she did recover from a deadly dose of Covid, after three less than groovy weeks in hospital.

She says she still believes in miracles. As you would.

Also pretty chuffed were two women told they needn’t after all pay their two-hundred quid fines for driving five miles to a reservoir for a walk.

Seems only fair, as Boris Johnson was apparently quite within his rights to cycle two miles further last week.

He did get told off, mind. One senior police officer said: ‘If he’d cycled to Barnard Castle it would have been worse, but it will become a part of the narrative that chips away at the overall effort.’

Problem is the government’s messaging can be muddled. To quote: ‘You can only leave your home to exercise, and not for the purpose of recreation or leisure.’

Which sounds like you can exercise, just don’t enjoy it. That gag, btw, comes courtesy of waspish Times writer Esther Webber.

Another whoops-a-daisy moment for the government came with the kiddies’ food fiasco.

Beginning with a miffed mummy tweeting a pic of a ‘hamper’ supplied on behalf of the Education Department by the company Chartwells.

Supposed to be enough to feed a child for ten days, it contained, wait for it .. a loaf of bread, a bag of pasta, one can of baked beans, some cheese, three apples, two carrots, one tomato, two baked potatoes, two bananas, two malt loaf snacks and three snack size tubes of fromage frais. 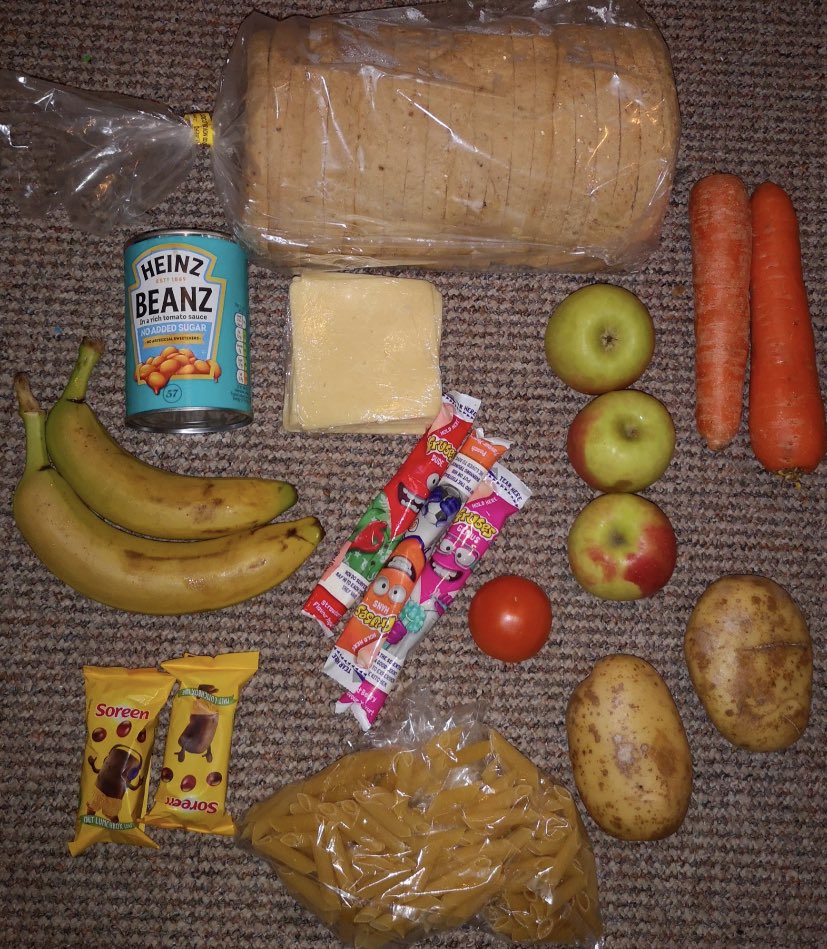 Nominal value: thirty nicker. Yerright. Most people priced the lot at little more than a fiver.

In the end Downing Street said it was ‘completely unacceptable,’ and the supplier said it would do better next week.

Not that they’d any choice, up against UK’s newest national treasure. When Marcus Rashford says jump ministers can only say how high.

They can be very slow on the uptake, mind. Friday’s border clampdown announcement felt like old news. We hadn’t already done that? Weird.

At least things are picking up stateside.

The incoming president is working on the assumption The Donald won’t outdo Lieutenant Colonel Custer by surviving his own last stand.

An insurrection of sorts is on the cards. But so is a successful and unprecedented second impeachment.

Meantime, Joe Biden is promising to get a grip on coronavirus. With a one-point-four trillion pound package to help households and businesses, and kickstart the vaccination programme.

This, he says, has been ‘a dismal failure so far.’ But he hopes to make up for lost time, by inoculating a hundred million Americans in his first hundred days in office.

So much for a return to normal under the new presidency. This guy has in mind actually governing.

At least this’ll have the charm of novelty.

While over here the novelty of our splendid isolation, appetising to some, is causing others to go hungry.

Take the bunch of truckers headed for Europe last week.

One minute they were landing in the Netherlands, sarnies stashed away. Next minute those same sarnies had been taken away.

Border officials explained the import of meat and dairy products from outside the EU was banned.

When one bloke asked if he could at least keep the bread containing the offending foodstuffs the answer was simple.

‘No, everything will be confiscated – welcome to the Brexit, sir. I’m sorry.’

Both driver and official were laughing, but the point was made.

And according to the Daily Star there’s one potential Brexit spin-off that’s definitely no laughing matter.

Concerns about UK availability of one particular drug that’s manufactured in Ireland have caused sales to shoot up, the paper claims.

This because of fears about a last-minute failure to get it in. Sort of commercial coitus interruptus. Such an anticlimax.

Oh, forgot to mention, the drug is Viagra.