I Say, That’s Just Not Cricket!

Nothing marred Trump’s transition. Up against twenty-five thousand national guard guys, The Donald’s motley crew knew they were beat, and the great ship America is now moored in calmer waters. Meaning Boris Johnson’s fighting on two fronts. As our Political Correspondent Peter Spencer reports, as well as struggling with an unyielding pandemic he has to build bridges across The Pond.

‘A poor player that struts and frets his hour upon the stage .. full of sound and fury, signifying nothing.’

Macbeth was down in the dumps when he said that. But who wouldn’t be, when they know they’re screwed?

Looking back on the tumultuous events of the last few weeks stateside, you can’t help but wonder.

Did the man really think he could prove he’d won the presidential election? When his every legal challenge was laughed out of court?

Does he really think he might wow the fans again in four years, when he’s being impeached for a second time, and even even-handed commentators are describing him as ‘disgraced’?

Easy enough to whip Germans into a frenzy in the nineteen thirties. The bill for World War One had shredded their economy.

No bar, mind, to Trump trying what our opposition leader Keir Starmer described in the commons last week as ‘the politics of hate’.

While the British press managed a mini rerun of the Christmas 1914 trenches truce. United, for once, in saying good riddance to bad rubbish.

The Daily Star mocked up a mocking pic of a disgruntled green-faced Trump, captioned ‘the incredible sulk’.

Hey presto, America’s rejoining the Paris climate accord and the World Health Organisation, and doing something meaningful about Covid-19.

Oh, and the Great Big Beautiful Wall is history. While pink seesaws letting people interact over the border have won Design of the Year award. Sweet. 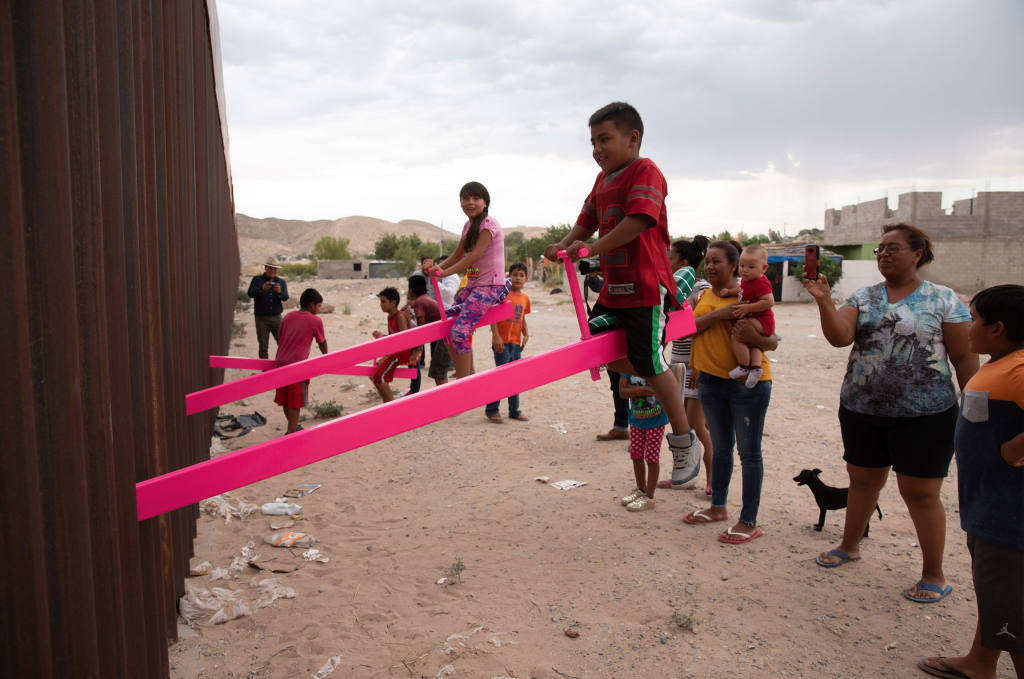 Not that the US is magically healed. The ex POTUS remains potent in the minds of millions of its citizens.

And some world leaders, like President Putin and Supreme Leader Kim Yong-un, would also doubtless like to make America grate (sic) again.

Annoyingly, from their point of view, Joe Biden’s first White House press briefing was described by pundits as ‘calm and substantial’.

A well-nigh forgotten luxury, but surely the shape of things to come.

Annoyingly also, from the British government’s perspective, those same pundits see Boris Johnson as more of a Trump kind of guy.

Given that Biden himself thinks they’ve got a point there, Bojo’s going to have his work cut out trying to, ahem, correct any misunderstandings.

Perhaps he’ll remind these chaps of something he said when the then Republican front-runner was rude about crime levels in London.

‘The only reason I wouldn’t go to some parts of New York is the real risk of meeting Donald Trump.’

Things change. Biden’s beginning came on the anniversary of the French monarchy’s end. La guillotine is not how you get ahead in politics.

But, sadly, Britain’s pandemic problem is no laughing matter.

With Covid-related death records being broken on a daily basis, a lockdown let-up’s looking further and further away.

Review next month? Forget it. March then? Dream on. Easter? Hmmm.

While the nation’s top boffin, Sir Patrick Vallance, cautions: ‘Every time you release it too quickly you get an upswing.’

And, in a hefty dig at government policy to date, he adds: ‘It’s worth remembering Albert Einstein’s definition of insanity – doing the same thing over and over again and expecting a different outcome.’

A point worth making, given that UK’s the country worst hit in Europe.

Glastonbury’s rocked off, then. While the Olympics limp to a halt. Even booking a staycation in Cornwall suddenly seems reckless.

And yet, and yet .. infections were down a quarter last week, transmission’s easing and vaccination’s cruising ahead faster than many dared hope.

It’s now looking increasingly likely everyone over seventy will have got the jab within the next three weeks. And everyone over fifty by May.

That’s thirty-two million people. Getting on for half the entire population.

Which is why some Tory backbenchers are bellyaching about lifting restrictions sooner rather than later.

Not that the government’s minded to take much notice of them at this stage. Once bitten twice shy? More chewed too often to bloody bits.

But here’s a crumb of comfort. A potentially life-saving gizmo that lets us check oxygen levels in our blood.

It can get dangerously low, thanks to coronavirus, without people even noticing it. Meaning by the time they make it to hospital it may be too late.

The device is called a pulse oximeter, and the acute medicine consultant leading the team working on it says we should all get one.

Only costs a score. For the benefit of readers brought up west of Bow Bells, that’s twenty pounds.

Meanwhile, in that neck of the woods, enterprising folk have not let the City of London depopulation crisis go to waste.

A funny smell coming from a premises near the old home of the stock exchange got Mr Plod thinking ‘’ello ’ello ’ello, what’s all this then?’

Answer? The area’s first cannabis factory. With proper lighting, irrigation and ventilation. Plus plants worth getting on for half a million.

Looks like the lads blew it. Dopey of them.

Cocaine could be a better line of business, at least you can’t smell it.

Though when border force guys settled for ‘various search techniques and visual checks’ in a container labelled bananas at Southampton port they nabbed seventy-six million pounds worth of the white stuff last week.

That got Priti Patel pretty smiley, for a change. Though the Home Secretary was her usual scary self on the subject of lockdown breaches.

From now on the police can dish out on-the-spot fines of eight hundred pounds to anyone at illegal gatherings of more than fifteen people.

If they keep doing it they’ll have to shell out more than six grand. Serious party pooper, that.

Not even political parties are immune. The Welsh Conservatives’ leader has quit after allegedly taking taking an untoward tipple.

Others, including his chief whip and a former Labour minister, are also in a spot of bother over the incident. The investigation’s ongoing.

No getting round it, odd things have been happening of late.

Hell hasn’t actually frozen over, but at one point it did start snowing in the Sahara.

Even more remarkably, arguably, a Michelin Guide star’s gone to a vegan restaurant in France. En pareil with the Pope hugging a Satanist.

But top touching prize must go to a puppy dog named Boncuk.

When her owner got Covid and was rushed to hospital, she rushed after him. And waited outside the hospital door. And waited. And waited.

No use bringing her home again, the family found. She showed up at about nine every morning and stayed till nightfall.

And when, a full six days later, medics finally wheeled out the recovered patient, patience reaped its reward.

Hospital staff, who’d fed the loyal little creature and bonded with her, were understandably weepy as the happy reunion was filmed.

In her excitement Boncuk even playfully gnawed her master’s foot. Great footage, pardon the language.