Exciting news for children of the 80s, and retro gaming fans alike. The Commodore 64, purveyor of such classics as Summer Games, Winter Games, California Games (which on reflection doesn’t really seem like a thing) and not forgetting Paperboy and The Way of the Exploding Fist, is back.

Yes in the 1980s the process of booting up a Commodore was an event in itself. First, there was the careful placement of cassette in the deck then half an hour or so of anxious waiting to see if it had actually loaded. Invariably it didn’t, but that was all part of it.

For most 8-13-year-old boys that 8-bit home computer with a sturdy keyboard, joystick (for any millennials google it, us late 30’s guys have some serious gaming skills) combo felt like it was sent from another dimension.

Remarkably as if to rub salt into our ageing wounds, it’s been announced that the home computer that was the Commodore 64 has been re-imagined in shrunken form as the C64 Mini (as seems to be the trend these days) and will be hitting our shelves very soon.

The console links up with TVs via a single HDMI cable, similar to the new mini SNES that just came out on September 29th. So presumably there’ll be none of those infuriating loading issues that kids today would find incomprehensible unless it’s coded in for older blokes for nostalgia purposes.

The C64 Mini will come with a single joystick controller, but you can add a second one to one of two USB ports built into the machine. You can also plug in a QWERTY keyboard, we’ll get to why you might need one of these in a minute. 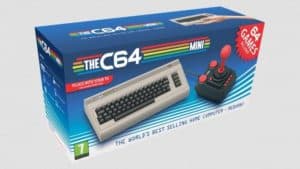 Fittingly 64 games come bundled with the cute little console. Ones to get most excited about have to be the classic that is ‘California Games’ (who played that on a LYNX?), ‘Speedball 2: Brutal Deluxe’ and we can’t help but be intrigued by the sound of ‘Nobby the Aardvark.’

And for wannabe programmers, just like the original Commodore 64, the C64 Mini is not only a games console but also a fully working computer, running BASIC. So whizzes out there (not us) can write and save their own programs and games without the need for that old cassette drive (we love that old cassette drive).

We don’t have a launch date as of yet, but hopefully, it’ll be some time early next year. It’s always murky waters dipping back into the past in such a transparent way, but this is definitely a trip down memory lane worth saddling up for! Check back with The MALESTROM for more details as and when we get them.

If you want a bit more information visit the official site HERE.