A Brush with Death? Taking Base Jumping to New Limits

The MALESTROM’s resident car buff Frank is back with the latest instalment in his series looking back at the cars we forever dreamed about owning, but had very little chance of getting behind the wheel of. This time 80s classic the Ferrari Testarossa.

Readers of The MALESTROM may be familiar with the saying that in this day and age, we sometimes have too much choice. I was in a similar predicament earlier on this month when I had to choose which car to write about next. The one thing I knew for sure was that it would be a Ferrari but which one? There are so many great cars that we could include them all in future pieces. In the end I decided on the car I remembered most when growing up in the 1980’s, it is of course the Testarossa.

The name Testarossa has long been associated with the Ferrari brand and has been in use on and off since the 1950’s. Testarossa means ‘Red Head’, this does not refer to any part of the car body but the engine. Lift the bonnet of a Testarossa and you will see a shiny red cylinder head on the engine. This makes a welcome change to the huge amount of plastic that greets you when you open the bonnet on most modern cars today. 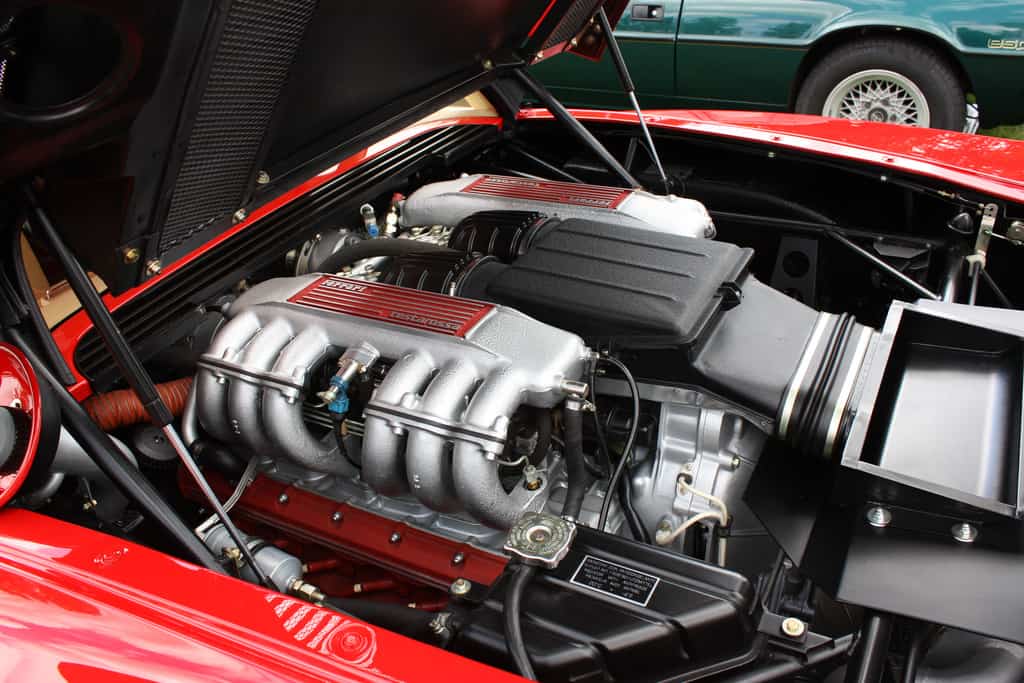 The Testarossa was launched in 1984 at the Paris Motor show and was the successor to the much loved Ferrari Berlinette Boxer. This car had been on sale since 1973 and was later known as the 512i BB.

The Testarossa had a 5.O litre flat 12 engine which, you’ve guess it readers, was painted red! The car had a 5-speed gearbox with power increasing to 390bhp which was fed via rear wheel drive. To save weight, the car was made of Aluminium which meant the car was very fast, going 0-60 in 5.5 seconds and boasting a top speed of a very nippy 180mph.

The Testarossa was classed as mid-engine car. The engine, which we have established was painted red, was situated between the axles but behind the cabin. This helped keep centre of gravity in the middle of the car which improved stability and also improved the cars cornering ability.

To ensure the new car kept it’s great Ferrari curves, there were a few new design features which marked it out as different to the previous Boxer model. Firstly, the radiator had to be moved from the front of the car so it could keep it amazing looks at the front. There was also a more practical reason for making the move. Ferrari wanted a car that would allow you to store a reasonable amount of luggage in the front compartment where a normal car would have its engine, this certainly isn’t a normal car. 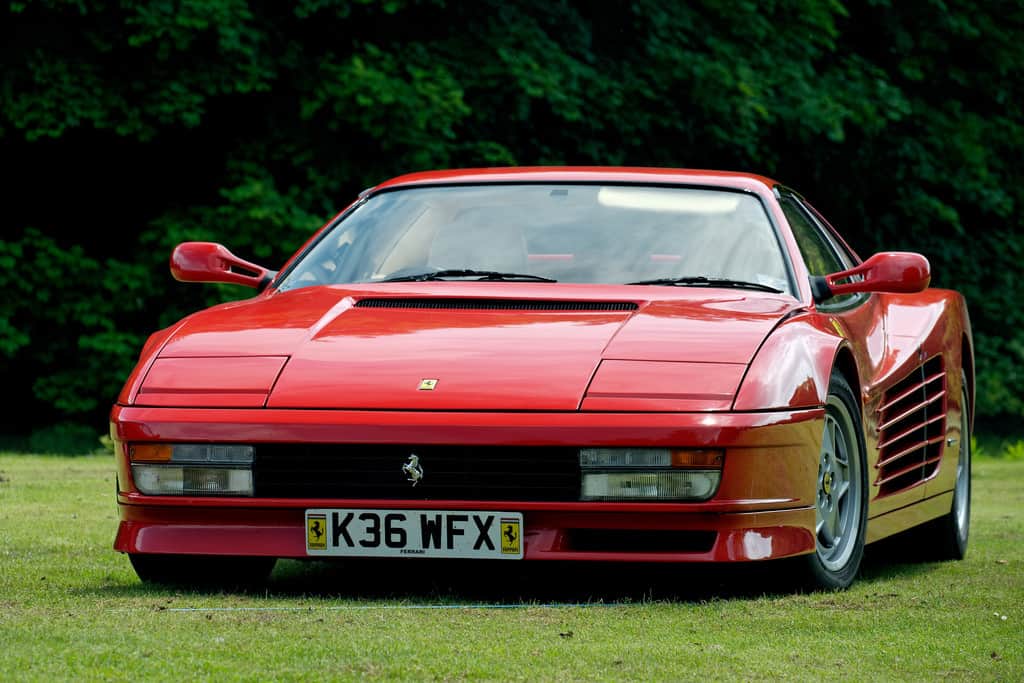 The boffins at Ferrari decided to move the radiator to the side of the car just ahead of the rear wheels. This resulted in the wings at the rear being wider than normal but if you think about it, it was in keeping with the new must have Ladies fashion of the 1980’s, the extra-wide shoulder pads. The downside of the car being wider was that manoeuvrability was difficult and also with the Testarossa, visibility disappointingly poor.

Another unusual thing about the vehicle which you would not see on today’s sports cars, was that the Testarossa has a single high mounted rear-view mirror on the driver’s door side. This had the unfortunate effect of making overtaking difficult. By 1987, a second mirror was attached to the passenger side door to help with visibility.

When the Testarossa appeared on sale in the UK, the starting price was £62,666 and by 1995, it had risen to £136,000 The car soon became a hit and this being the 1980’s, it took on a showbiz life of its own. Big names in entertainment and sport wanted the Ferrari, and the sleek looks that came with it. Owners of the Testarossa included, Sir Elton John, Rod Stewart, O.J. Simpson, Michael Jordan, Mike Tyson and Don Johnson. 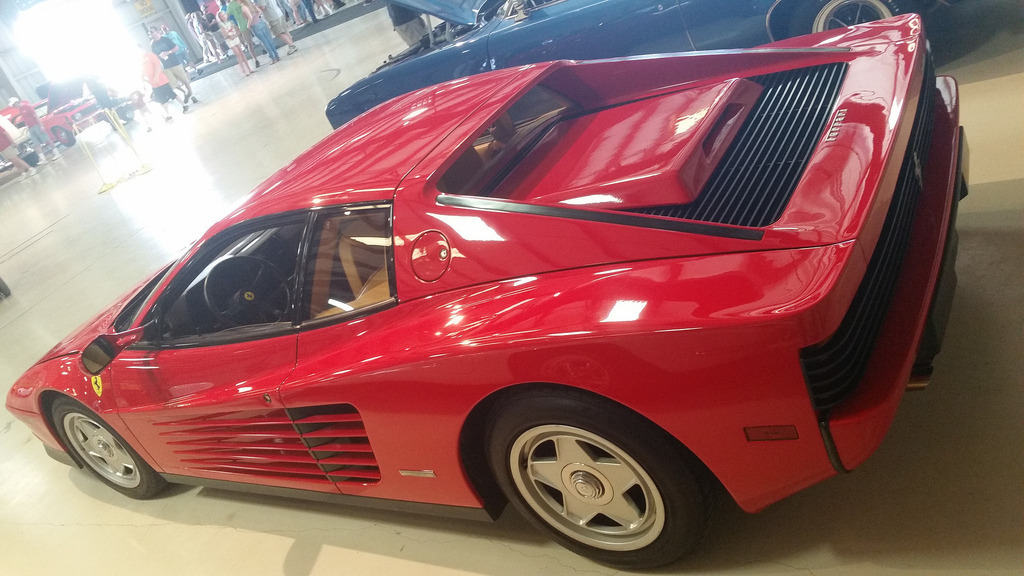 “The Testarossa was a car designed and built to cash in on an image. And since cashing in was what the Eighties were all about, it was the perfect vehicle for the time. The saving grace was, it was also a damn good automobile.”

In America, the car made the front cover of Road and Truck Magazine an amazing nine times within a space of five years. The car made further appearances in popular culture by appearing in the arcade game Outrun and also in the 3rd season of Miami Vice which was hugely popular TV show on both sides of the Atlantic during the 80’s.

The car’s side grills became a popular add on for car kits in America with the the Pontiac Fiero and the Mazda B series Pick Up Trucks being among the more interesting cars to receive the Testarossa treatment.

With the invention of the 1990’s came changes to the Testarossa. In 1992, the car was renamed the 512TR which was launched at the Los Angles Motor show. The Ferrari was totally re-engineered to take on the latest offering from Lamborghini, The Diablo. In 1994, at the Paris Motor show, the TR was dropped and the car became known as the F512M, the F standing for Ferrari and M for Modificata in Italian, which translates to modified. 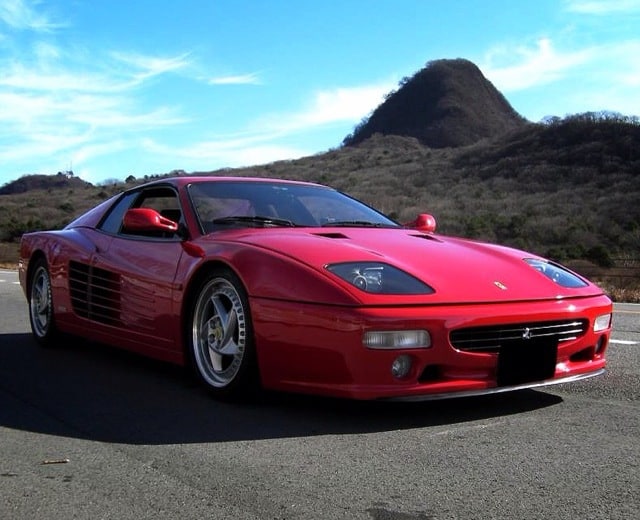 The F512M had a revised dashboard and controls for the climate control were also relocated. Ferrari made 501 F512M models, with 75 being right hand drive so they will be a rare sight on the roads in the UK.

Engine improvement meant 0-60 was now achieved in 4.9 seconds and the top speed was 196mph. The front and rear driving lamps had minor updates and air conditioning was now standard. The F512M was also Ferrari’s last mid-engined car before being replaced by the 550 Maranello coupe in 1996.

In total, there were nearly 10,000 Testarossas, 512 TRs and F512Ms made, making it one of the best selling Ferrari models ever.

It is now over 20 years since the last 512M/Testarossa rolled off the production line, but if one were to drive past today, I bet it would still turn heads with its fantastic 1980’s looks and the purring sounds of its amazing red engine.