Britain’s disorderly departure from the EU has not been catapulted into never-never land. But the coalition of forces ranged against it has finally got its act together, and its fingers round Boris Johnson’s neck. As our Political Correspondent Peter Spencer reports, the Prime Minister’s rapidly running out of options.

‘This parrot is no more! He has ceased to be! ‘E’s expired and gone to meet ‘is maker! .. ‘E’s shuffled off ‘is mortal coil, run down the curtain and joined the bleedin’ choir invisible. THIS IS AN EX-PARROT!!’

Anyone not familiar with the Monty Python dead parrot sketch should check it out now and have a good laugh.

Then join everyone else in substituting for dead parrot Boris Johnson’s pledge to be out of Europe by Halloween ‘do or die’.

While the body politic and commentariat have collectively come over all unnecessary, what with all that to-do at Westminster, cooler heads have reigned in the city.

When the news broke that the opposition parties, in tandem with Tory rebels, really had vetoed a no-deal departure, the hitherto drooping pound bounced back to a five-week high.

If the upshot was a government led by Jeremy Corbyn so what? Next to no-deal it’s a detail.

Step back a bit, wait for the mists to clear, and what actually matters heaves once more into view.

Brexit. It’s the nation’s destiny we’re talking about here. For generations. Not the careers of some bunch of jumped up little soon-to-be nobodies.

Face it, Prime Ministers come and go. However appalling or brilliant their policies are, the next lot will be unpicking them quicker than you can say bog off, loser.

It’s symptomatic of the existential crisis brought on by Brexit that Jo Johnson has thrown in the political towel, quitting both as a minister and a Conservative MP.

The Johnson siblings are said to be extremely close, which might explain some of Bojo’s more wobbly performances of late.

That said, he’s the first Prime Minister to lose his very first vote in the Commons since the Earl of Rosebery in 1894.

And he’s certainly learning the hard way that running a country’s a bit trickier than writing a newspaper column telling other people how to do it.

It’s easy, after all, taking a punt one week, then trying the opposite tack seven days later. Political commentary is only food for thought, not a blueprint for government.

And when it comes to taking a relatively easy-going approach to the actual facts, Bojo’s got form. But got away with it, somehow or other, most of the time.

Nonetheless, he’s widely regarded by accountable mainstream scribes, constantly up against fake news/dodgy website charlatans, as a traitor to the profession. Hence the schadenfreude on display in much that’s now being written about him.

His cabinet colleagues wouldn’t go that far, of course, but it’s reported a fair few are getting the jitters about where his gung-ho bluff and bluster is leading.

To recap briefly. In the outrage provoked by his decision to cut vital Brexit debating time, 21 Tory MP’s took to heart the old saying: ‘Evil prevails when good men do nothing’.

So they voted with the opposition, to trigger the mechanism forcing Boris Johnson to try and delay Brexit. Even though it could, and as it turns out did, spell the end of their careers.

These were senior, respected people, including Winston Churchill’s grandson. Yet they were booted out by text. Some not even sent directly to them, but to their local constituency chairs.

Oh, and by the way, Bojo’s also said he’ll expel any Brexiteers who vote against whatever deal he may or may not manage to strike up with Brussels next month.

At least the Grand old Duke of York did have an army to march up and down the hill. Bojo’s seems to be shrivelling before our eyes.

The Financial Times, not an organ noted for hyperbole, gravely reported the Conservatives were ‘in a state of disintegration’, with ‘poison coursing through the bloodstream’ of the party.

Actually, Westminster’s awash with the stuff.

Brexit tensions have generated an entire new lexicon, both in parliament and on social media.

Boris Johnson’s chief strategist, the former Vote Leave boss Dominic Cummings, has been variously described as Svengali and Rasputin. And a fair few other things not suited for a respectable magazine like The MALESTROM.

Not that he’s one to pull his punches either. His answer to a bunch of political aides shocked by his dismissal of a colleague? ‘If you don’t like how I run things, there’s the door. F*** off!’

The most colourful term of abuse, though, has been reserved for the Leader of the House, Jacob Rees-Mogg. Snollygoster. American slang, meaning a shrewd, unprincipled person, especially a politician.

He’s also come in for stick after pictures appeared of him lounging across the front benches in the commons, apparently taking a little nap. 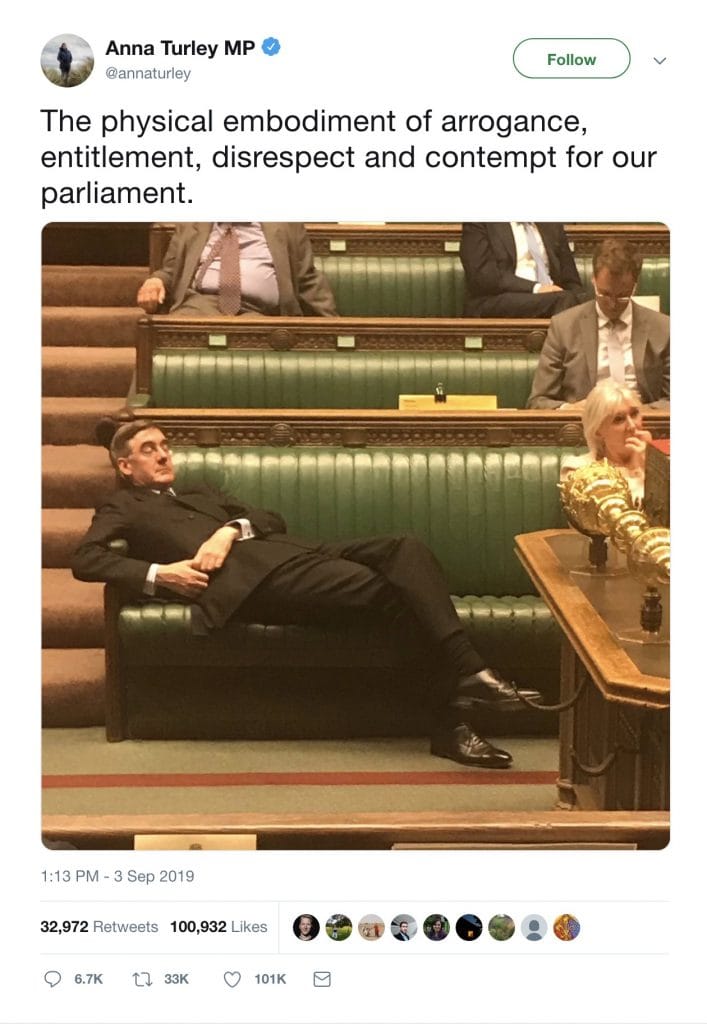 Churchill’s grandson, until last week a Conservative colleague, said he’s ‘a living example of what a moderately cut double-breasted suit and a decent tie can do with an ultra-posh voice and a bit of ginger stuck up his a***’.

And Bojo himself? Opposition leaders are not calling him a liar, because that is unparliamentary language. But they reckon his nose is outgrowing The Shard.

Which is why, apparently counter-intuitively, they’re refusing his offer of a general election in mid-October.

Put simply, they don’t trust him not to somehow slither it back to after the currently scheduled Brexit date a couple of weeks later.

This would of course involve him breaking the law they’ve just got through parliament, demanding he seek a Brexit delay till next January. Which, it’s reported, European leaders have privately indicated they’d grant.

But Boris Johnson’s said he’d sooner ‘be dead in a ditch’ than ask for it. Hence serious talk of legal action to force him to. With the threat even of him being sent to jail if he refuses.

So what, exactly, is he going to do then?

As he almost certainly can’t get his snap poll on his own terms he could, just, press the nuclear button. And resign.

That way there’d have to be an election. If it came while we were still in the European Union the Brexit party would rip the Tories to shreds.

Unless .. wait for it .. unless Bojo included in his own prospectus the promise of another referendum.

Crazy? Sure, but there’s the old song: ‘In olden days, a glimpse of stocking was looked on as something shocking. But now, God knows, anything goes.’