They say imitation is the sincerest form of flattery, so if street artist Banksy was to see the work that makes up the latest exhibition from Paul Karslake then you’d imagine he’d take it as a serious compliment.

Acclaimed airbrush artist Paul has recreated the works of Banksy’s most iconic pictures and adapted them into fine art in the style of Old Master paintings, culminating in a 12-piece collection entitled “Bank Robbery”.

Paul has reworked pictures like “Gorilla in a Pink Mask”, “Pulp Fiction” & “Mona Lisa”, turning them from their original graffiti stencil state to paintings with an incredible level of detail and photorealism.

He does this through airbrushing, hand painting and applying a unique ageing technique. With each painting showcased in a custom-made antique-style frame embedded with skulls, again aiding the transition from street art to fine art.

The show is hosted by Bad Art, founded by Sara Lovatt and Erol Ezen. Their core foundation is daring to be different, hence why they’re a perfect fit for this particular collaboration. As Ezen told us,

“Most High Street galleries all seem to generally offer the same vanilla collections season after season. Bad Art will refuse to work with many of the artists that are associated with these galleries as we have no interest in their work. Instead, we will actively try to work at the “Punk Rock” end of the market and everything about the projects we undertake will reflect this.”

We spoke to Paul Karslake about the initial idea that led to the show, his artistic process and find out about his graffiti spraying past.

The MALESTROM: Tell us about the idea behind the exhibition?

Paul Karslake: It started as a half daydream. I was looking at an article on Banksy and I was thinking that must be hard work, cause I used to do a bit of that. But that was a million years ago. Then I thought, wouldn’t it be lovely to have the time to be able to finish off a piece as you would ultimately really want to see it? So I thought, maybe I’ll finish some Banksy’s off for him (laughs).

He encourages people to copy and emulate his stuff and I thought, well I don’t want to just copy it, cause that’s just a waste of time. So I wanted to just enhance it as kind of a tribute to his fabulous and very humorous ideas. As nothing in this world is original I just thought, stuff it, I’ll make the Mona Lisa have age cracks on her and look exactly like the Mona Lisa, but with a bazooka. And that’s how it all started, with that picture. 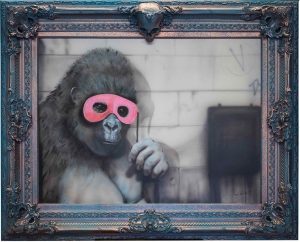 TM: Have you contacted Banksy about the exhibition?

TM: What do you think of his work? He’s hugely subversive, you’re almost subverting his work even further…

PK: It’s right up my street. I absolutely love it. I’ve always been in trouble my whole life and to me, although a lot of them are copies of things, they’re some of the most original versions of anything. Very funny and very on point.

TM: Tell us about the key works you’ve created here…

PK: One of the seminal works is the Pulp Fiction ‘Check out the big brain on Brad’, with John Travolta and Samuel L. Jackson. It’s hilarious, it actually looks funnier. You accept it as a stencil, cartoony version, but as a photographically real version, it’s even funnier. The bananas have got little brown spots on them… because I’m a bit of an anorak about stuff like that. It looks hilarious, I really love it. I’ve enjoyed doing all of them actually. 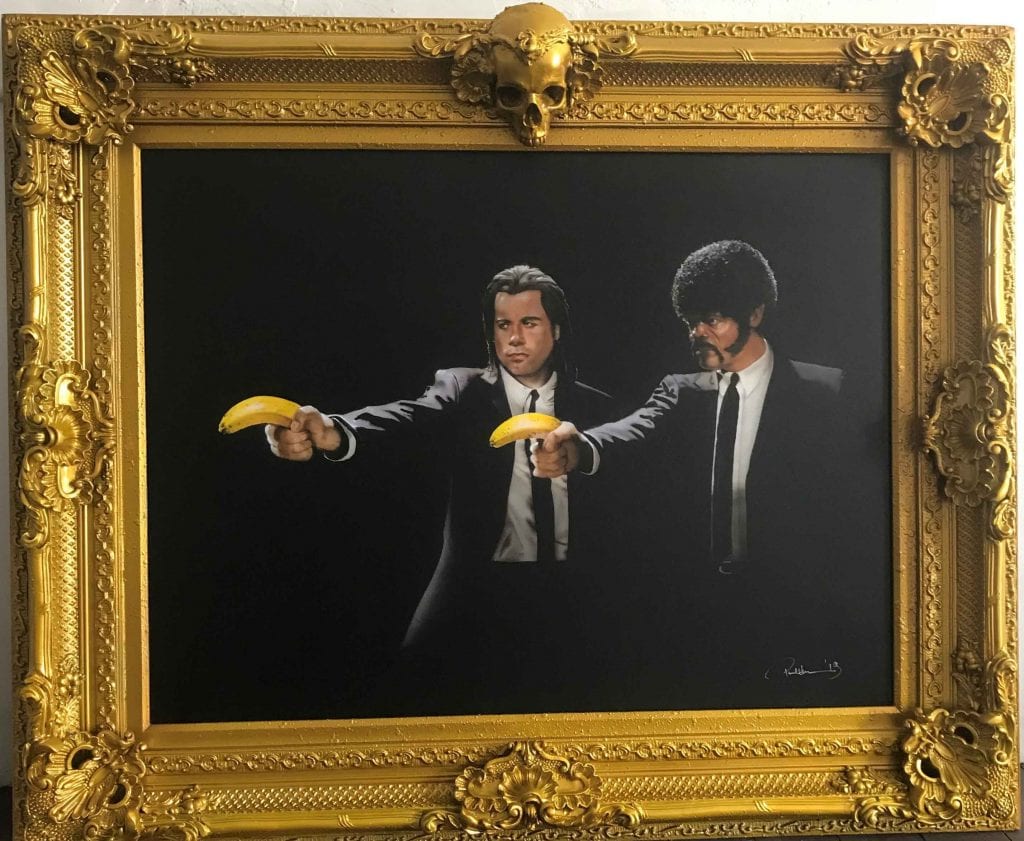 Another reason I’ve created all this is because art has become so elitist and so serious, it’s supposed to entertain really. Everyone’s got so deep with it, you’ve got people like Peter Doig who’s just sold a very nice but normal piece of art for 29 million. Who can afford that? It’s ridiculous. What makes it worth that? I don’t get it. The art world has become so unobtainable I want to do some stuff that people can have a laugh about. It looks serious, but it isn’t (laughs).

TM: Is that the vibe you’re looking to create with this show?

PK: To be honest it’s a bit of fun and it’s what I do for a living. If people love it and I sell a few great, it’s not going to cost them 29 million. I think it’s a nice impressive body of work. 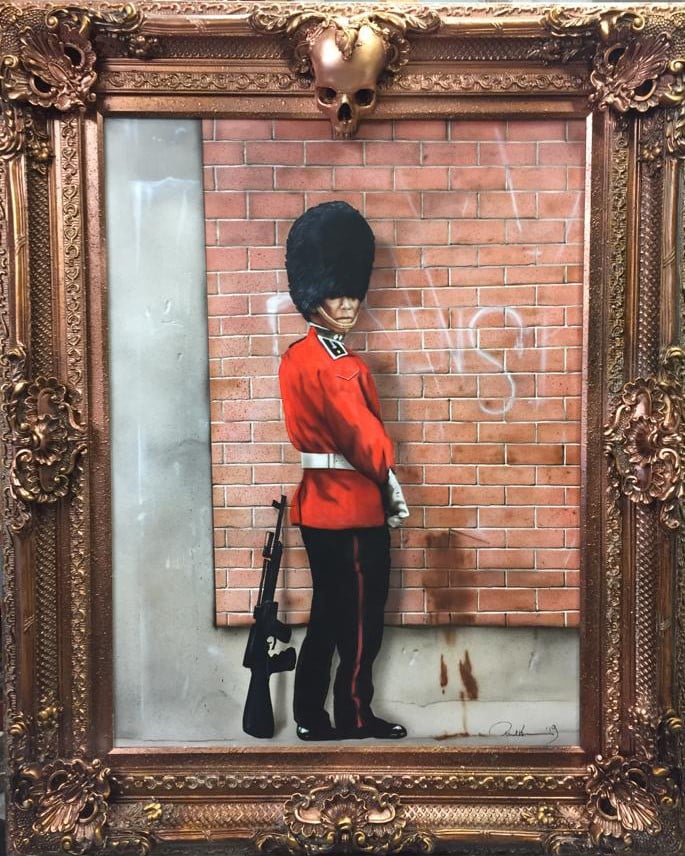 TM: So have you dabbled in graffiti in the past?

PK: I’m an airbrush artist, I’ve always sprayed, I’ve always used aerosol cans. I got told off when I was a little boy for doing a picture of Marilyn Monroe and James Dean on a wall in Eastford in Essex and that was 1968.

TM: You were a bit of a pioneer then?

PK: Yeah really, I suppose so. I graffitied the whole of the docklands before it was built, that was 1989. And I turned a building site into Egypt, we had a great time doing that. But then it was all kind of above board-ish. So yeah, I was out of the traps spraying quite early. 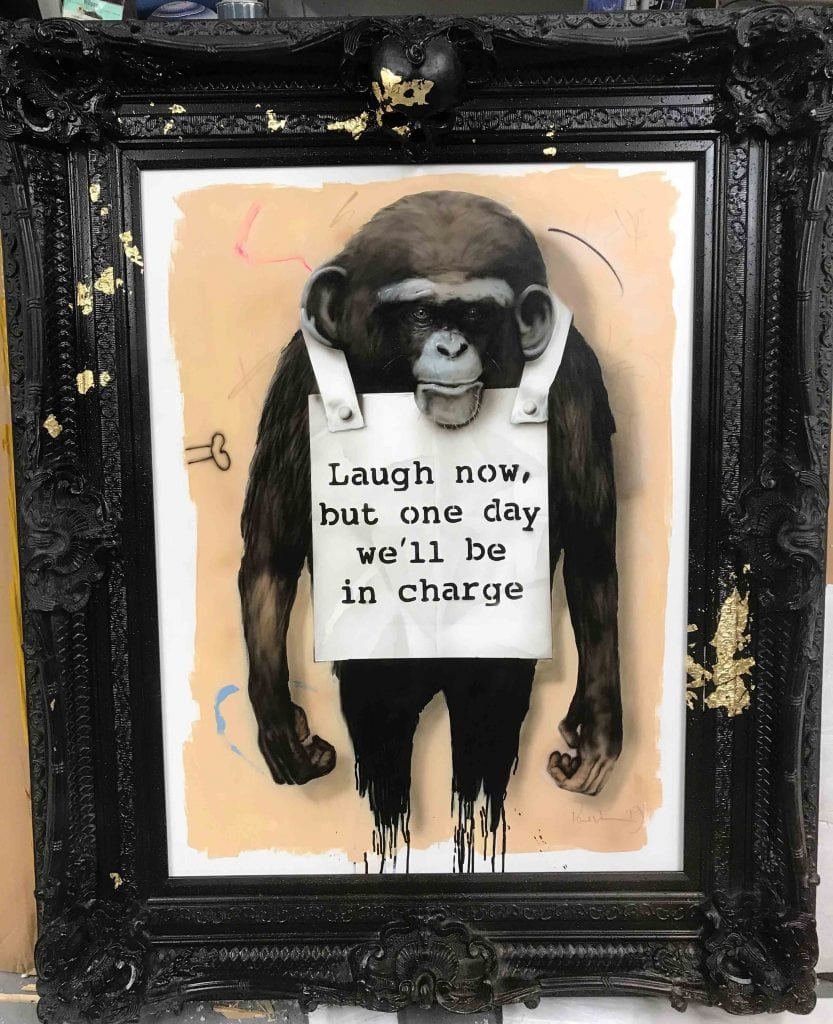 TM: How do you go about recreating a Banksy? Especially when crossed with fine art…

PK: You draw it up with a pencil, then get your airbrush out and start detailing it up and masking bits. It’s exactly the same process as Banksy really, using the stencils and everything else. Just not having the police at your heels. But rather doing it in a nice warm studio in your own time.

TM: Do you think there’s a crossover between street art & fine art? Are there parallels there?

PK: Well it’s become fine art now hasn’t it. Banksy’s Chimpanzee parliament has just nudged ten million quid. So that’s fine art money. Banksy in that world… it’s like giving Mick Jagger a Knighthood. Why? They spend their whole lives rebelling against it and then it’s like, ‘oh alright then.’ So it’s the same with street art which was an un-commissioned unpaid for rebellious act and is now big money. So I’m just illustrating that. 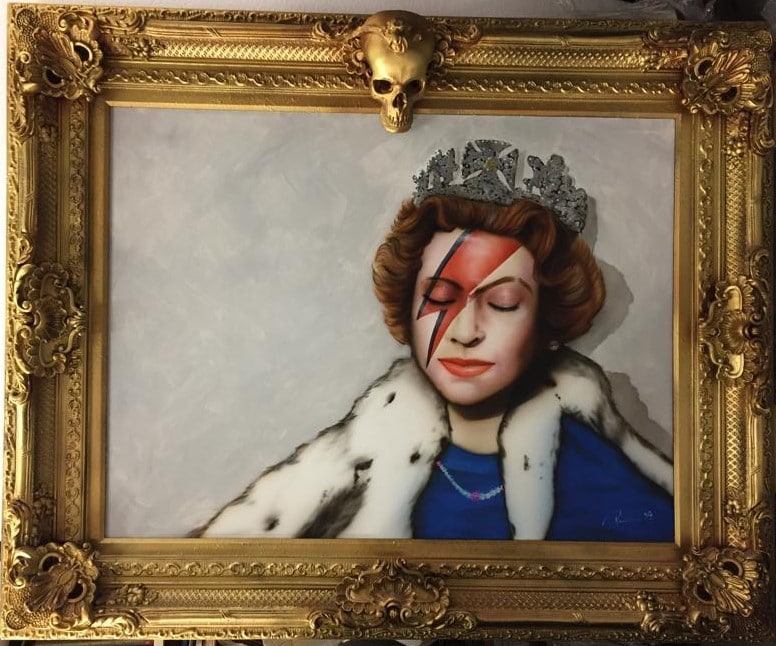 TM: Why should people come to see your exhibition?

PK: Just to see the blend of fine arts, sculpture and humour. It’s all mixed together and the result is still rebellious and strange but in a very palatable form.

Bank Robbery will be on show at Urban Antidote in Leicester from 19th October followed by a London pop up event from 1st November – venue details to be announced soon on Bad Art’s Instagram @badart.life