The Best Summer Booze to Suit Every Type of Drinker

Since launching her YouTube channel in September 2017 Rachel Ama has gained a huge following from lovers of her simple, yet delicious vegan recipes.

She’s taken inspiration from her Caribbean and African roots, not to mention her nutrition savvy Mum, to make vegan alternatives to staple recipes, still packed with traditional spices and rich flavours.

But it wasn’t always this way. As a teen, she was a self-confessed KFC addict, until three years ago when she made the life-changing decision to go vegan, and the rest is history.

With the release of her brilliant cookbook Rachel Ama’s Vegan Eats on the horizon, we sat down for a chin wag with Rachel about the power of all things plant-based, to get her tips for those wanting to adopt a meat and dairy-free lifestyle and her favourite track to play while cooking.

The MALESTROM: So Rachel, why not tell us a little about where your inspiration comes from for the recipes in your new book?

Rachel Ama: The book is exciting and full of flavour, I would say it’s like me in a book, because I call myself a mix and a blend, because my family is Caribbean, it’s African, it’s British, Welsh, so a lot of the food I ate, and my culture has been such a mix.

I really wanted to explore the food I was eating with my cultures in a plant-based way and deliver really flavourful, delicious, vegan meals, so that was the inspiration for building this cookbook.

TM: And what was the main catalyst for following a plant-based diet?

RA: No one around me was vegan, and I’ve always had pets – actually my dog (Rachel’s Cockapoo, Marlee) is currently hugging my leg (laughs) – and I’d watched some documentaries on Netflix, and when I saw how the meat ended up on my plate, it didn’t sit right with me and I realized that I didn’t want to be a part of that anymore.

But obviously, I still wanted to enjoy food as much as I did before and that was the mission, I’m going to do this but I’m going to make sure the food I’m making is really frickin delicious and I love it.

TM: And you mention in the book how you ate a lot of junk food as a kid, KFC and all?

RA: Yeah, I mean my home life was very healthy, my Mum studied nutrition, so it was always home cooked meals, but my favourite thing to do after school was to go to the chicken shop, and that was my escape from the healthy household, was eating loads of chicken shop chicken. So, being vegan, it’s funny because my friends I used to work with couldn’t believe it when I told them.

RA: Because I was dairy intolerant, and it was so bad for me. A lot of people miss cheese, but because cheese is so evil for me, I hate cheese. I’m actually fortunate that there’s nothing I really miss. If I do miss something, it’s normally Caribbean food that I’ll smell and miss, but that inspires me to make a plant-based version of something.

TM: In terms of protein how do you ensure you get enough from a vegan diet?

RA: Everyone’s different and everyone’s protein intake is different. I personally am quite mindful that in each meal I eat, I get a good proportion of legumes in there because that’s a great source of protein.

And, if I want to train and build extra muscle or feel I need more protein, there are vegan protein shakes that I can turn to. I love chickpeas, I have lots of recipes where I’m including the vegetables, throwing in lots of legumes that keep you nice and full and the taste buds happy, and that’s my goal.

TM: What tips do you have for people who want to adopt a plant-based lifestyle but maybe feel a bit overwhelmed?

RA: One of the things that I think helps is meal prepping. I have a recipe that’s a chickpea aubergine ratatouille that is really simple to make, and you could have that on a Monday, it’s really very simple and then you could have it with pasta one day, brown rice on another or maybe with a salad.

TM: How do you go about coming up with your recipes?

RA: It’s definitely a bit of everything, from when I travel to being born in London and having friends with all sorts of different cultural backgrounds and going to their places after school.

Having such a variety around me, the inspiration comes from when I smell food or when someone’s made something that looks incredible but they’ve made it with meat and I want to enjoy those flavours and textures but with plants. It’s just that external inspiration from different spices and flavours and just exploring it with plants.

TM: And you’ve just been in Costa Rica, tell us about that?

RA: It was just incredible to be in a country where you can walk down the road and pick a fruit that you might not have seen before off a tree and just eat it and discover this delicious new taste.

Even the simplest of herbs pack so much more punch in Costa Rica and being so close to the Caribbean, I personally didn’t realise how similar the food was on the Caribbean side of Costa Rica was to the Caribbean where my family’s from. Having those flavours… oh, it was incredible. It’s inspired me to make even more food with those ingredients and flavour.

TM: We could probably learn a lot from their dietary habits?

RA: Yeah it’s like stepping back in time in many ways. Before we had access to food from all over the world, we had to eat from the land.

We’re now relearning that, lots of people are growing their own vegetables and herbs and it’s seasonal eating, taking some basic ingredients and then adding flavour through spices and herbs and enjoying that. As opposed to the way we’ve been doing things over the years, running to the supermarket and buying ready meals (laughs).

TM: It’s like picking a favourite child, but which is the standout recipe in the book?

It’s spiced aubergine with sweet potato mash, with cinnamon and nutmeg and a tahini dressing. And the roasted aubergine is in a rich tomato sauce with loads of different spices. The flavour combination is just really delicious.

But then equally I could say my jerk tacos with plantain and mango salsa is also pretty wonderful.

TM: That one does look particularly amazing, we need to try that. In terms of affordability of ingredients, that’s something you focus on as well?

RA: Obviously it depends on where you shop and what supermarket you use. In high-end supermarkets, everything’s expensive, but, by going somewhere more affordable, your vegetables really aren’t going to be more expensive than eating meat at all.

A lot of the recipes in the book use your basic chickpeas, lentils, and basic affordable vegetables. I haven’t used meat replacements. I often find with vegan diets its things like vegan sausages that will cost quite a bit more, but if you’re just buying the whole foods and the plants it should be a lot cheaper.

TM: Let’s talk about music, you’ve got the playlist there in the book, is that an important element of your cooking?

RA: Music has always been the love of mine from when I was in a dance troupe to being in a household that played music all day and my brother, who was a music producer at one point in his life. So, naturally, my environment when I’m cooking is one that I’m enjoying which involves listening to music.

So throughout the book, there’s music to suit the recipes, African, Spanish, so really bringing those sensations, sounds and tastes together. It’s my favourite way to eat and I want to share that with people.

RA: Well, in this book I’ve avoided all the sad songs (laughs). But, say I’m doing something with a Spanish influence, my go-to song, just because I’ve listened to it so much throughout my life is Chan Chan from Buena Vista Social Club and if I’m feeling very soul foodie then my go to is Jill Scott because she’s my favourite artist of all time. So it kind of goes around like that.

TM: And presumably that goes hand in hand with your YouTube channel which is huge. Tell us how that came about?

RA: Well, like I said no one around me was vegan, and I didn’t really understand veganism before doing that impulsive research. And I think some people thought why is Rachel Ama vegan? She used to love KFC (laughs).

So I really wanted to show people the food I was making and when I looked at the mainstream vegan industry there wasn’t that much diversity around, and what was there wasn’t really representative of everyone.

So I went on YouTube and was just myself and luckily it resonated with people and loads of people got involved and were contacting me, thanking me – and I was like “Wow!” People were sending me pictures of what they’d made. Obviously, I didn’t know it would be so impactful and it was just amazing.

TM: That must be nice to get that kind of feedback and realise you’re making a difference?

RA: Yeah and it’s really immediate, people can just message you straight away. I’ve had peoples kids eating the food and leaving videos thanking me and my heart just melts.

TM: And what about your fitness regime, you’re a big fan of Muay Thai, tell us about that?

RA: I’ve always been really sporty and was a bit of a tomboy growing up and so I like to stay fit and be active. One of the ways I do that is Muay Thai which is obviously a combat sport and I’m a bit obsessed with it from a fitness aspect. It’s just a fun way for me to one have a bit of therapy, and to get my energy flowing, stay active and enjoy myself.

TM: To finish, could you sum up what you think are the benefits of a plant-based diet?

RA: Yeah, I mean everyone’s got their own experience, and everyone’s body absorbs things differently, but for me personally I feel amazing! I think it’s also really important to mindful of the impact we’re having on the environment and yeah what more could you want? My health is great and I feel really passionate about how animals are now being treated.

TM: Well thanks for speaking to us Rachel and congratulations on the book, it’s fantastic!

Rachel Ama’s Vegan Eats by Ebury Press is out to buy now. 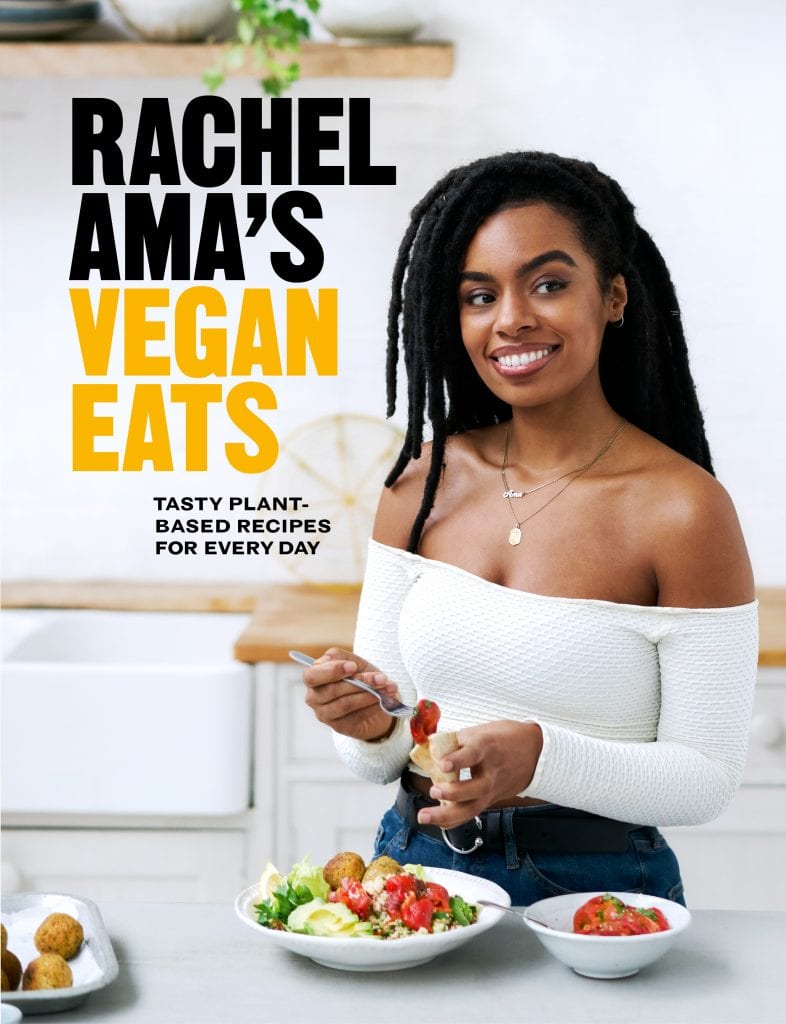