Hanging Out With Guns N’ Roses in the 80s

There’s a bridge in Scotland that’s been the scene of a huge number of similar strange goings on since the late 50s. Overtoun Bridge in the village of Milton in Dunbarton has long been the setting for many canine deaths, as dogs on a leisurely stroll with their owners, inexplicably leap to their death from the side of the bridge and on some occasions even climb the parapet walls to make the jump. Each and every incident has occurred in exactly the same spot and almost always it has happened on a clear and sunny day.

The Victorian structure leads to the 19th century castle called Overtoun House owned by Lord Overtoun who had the bridge built in 1895. As with any unexplained mystery, there are a wide ranging number of theories from the paranormal, to sound vibrations, and even the suggestion that Overtoun Bridge is a “thin place” that according to Celtic mythology is an area where heaven and earth are at their closest. 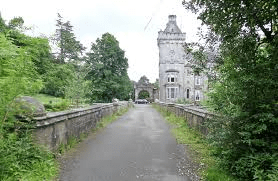 Make of that what you will, but perhaps the most logical explanation is that the mink that live in the area mark the territory with a very strong scent, and are often seen scurrying in the rocks in the stream below, the combination of which the dogs find irresistible and as a consequence ultimately jump to their demise. However, it is presumably not the only area in Britain where mink are active and doesn’t satisfactorily explain why similar events wouldn’t occur elsewhere, or moreover why the dogs all jumped from exactly the same spot. One factor to take into consideration which offers credence to this theory however, is that nearly all the dogs that jumped were long-nosed breeds i.e. dogs with an exceptional sense of smell.

As far back as the 1950s people started calling it “The Bridge of Death” because of these strange incidents. Fifty dogs are known to have died as a result of making the jump, and in the time period since around 600 dogs have made the leap and survived. Even stranger is the fact that many of these dogs went on to try the fatal leap a second time, although why you would take your beloved pet back to the scene of such horror, is a mystery in itself.

Author Paul Owen believes thinks the bridge is haunted by the spirit of Lady Overtoun who resided in the house, and is said to have walked along the bridge after the death of her husband in 1908. His book ‘The Baron of Rainbow Bridge’ delves into the doggy suicide phenomenon looking for clues from the past as to why animals are jumping. Could it be a ghost luring them to their deaths? Or a curse put on the bridge at its time of building?

Another significant and tragic incident took place at the very spot in question. In 1994 local Kevin Moy was taking a stroll on a sunny day with his wife and new-born child, when completely out of the blue he dropped his baby off the bridge and into the burn below, a distance of over 40 ft, before attempting to launch himself off the parapet too.

He was dragged back by his screaming wife, and his child would die the following day due to the injuries suffered. Upon his arrest Moy claimed his child was the devil, and that he and the infant were responsible for the Gulf War! Moy was found to be insane at the time of the incident, but in relation to the goings on at Overtoun Bridge, it simply added fuel to the fire. 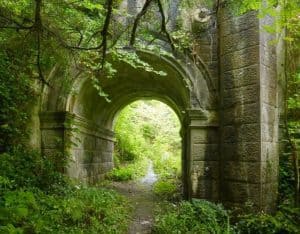 One other explanation has been put forward, regarding a dog’s acute and hypersensitive hearing. It is based around the idea of some sort of acoustic anomaly, either within the bridge itself, or related to the nearby telephone pylons – however as theories go this one has more holes in it than a block of swiss cheese. Acoustic experts have done the rounds and can offer up no example of unusual sounds.

The Scottish Society for the Prevention of Cruelty to Animals have visited the site also, but came to no conclusions for the odd behaviour of the animals. It’s a mystery that may never be solved, but it’s certainly strange that in exactly the same spot, on a clear sunny day, countless dogs have without any prior indication of unrest, leapt off the bridge to their deaths.