With the ever-increasing fascination in the Western world with all things health and fitness, the wellness trade has become one of the fastest-growing industries on the market. In particular, it is diet and nutrition that takes centre stage and the word ‘superfood’ has become an all too familiar phrase.

More recent obsessions lie in one particular area, that of fermented foods and the benefit of eating a diet rich in such will result in increased gut health, in turn, promoting a better looking you, be it skin, hair or more satisfactory toilet movements (all hail to that!), the list is endless. But how beneficial are fermented foods? There is no doubt that many other nations across the globe have included them as a staple part of their daily consumption. We delve deeper to find some real answers.

Fitness and wellbeing movers and shakers, particularly those social media influencers we see lying on sun-drenched desert islands have been championing the benefits of fermented food as being responsible for their enviable physiques and all-round happy glow. Whether it be kimchi, sauerkraut, yoghurt, kombucha or even sourdough bread, they have become an ever-present in big city food scenes from London to LA and everywhere in between.

What exactly is fermentation? Fermentation is if it can be described simply, a chemical process in which an organism transforms a carbohydrate such as sugar or starch into an acid or indeed alcohol. It is essentially a process whereby microorganisms can grow and flourish in the absence of air, or oxygen if you like.

It is, as many of you will be aware of the age-old process by which beer or wine is produced, which indeed themselves have certain health benefits when consumed moderately. As far back as the mid-19th-century scientists of the time were aware of the process of fermentation and furthermore during these times, it was a means by which cheese or leavened bread was made.

As is so often the case these days when it comes to the latest fad diet or food trend, it is not the discovery of some new ingredient but in fact a return to more traditional methods and approaches to producing food. In our increasing desire to avoid foods that contain a raft of chemicals and what seem to be unnecessary additions, many are looking to a time before mass production, consumerism and consumption.

And of course in those societies where fermentation continues and always has been a method by which food is produced they share in common the fact that they are not afflicted by so many of the health problems we have in the UK, parts of Europe and the US for example, with heart disease, obesity and even certain mental health disorders.

The Koreans eat kimchi with practically every meal, in Poland and Germany sauerkraut is an ever-present at the dining table and in France, all manner of pickled vegetables are eaten. Across Scandinavia there any number of examples of what could be classed as fermented foods, be it hung meats or dried fish, as in Spain for that matter.

What do all these nations have in common? Well a greater life expectancy than us Brits and our friends across the pond. But can it simply be due to these very specific types of food? Or is it maybe a more realistic and respectful approach to food consumption? It could be argued that in Britain and the US that it is not so much what we don’t eat as much as what we do. Let’s not forget that in the UK we have a strong tradition for pickled foods, from beetroot and onions to chutneys and preserves.

A study conducted by the NCBI highlighted the increasing movement away from traditional lifestyles and the link between this and increased rates of depression and other mental health disorders in certain areas of the Western world. The study goes on to highlight that,

“Traditional dietary practices, often exemplified by Mediterranean and Japanese models, are typically characterized by (relative to Western practices) higher intakes of fruits and vegetables, fish and seafood, cereals with limited processing, fiber, and only modest amounts of dairy and lean meats … Among the more convincing of these studies are the recent prospective investigations showing that stronger adherence to traditional healthy dietary patterns is associated with a 25 to 30% lower risk of depression. Traditional Japanese dietary practices, where fermented soy products are specifically linked to adherence, have also been associated with lower rates of depressive symptoms. Alcohol has deservedly received much attention in the link between problematic consumption and a higher risk of depression. However, when consumed in modest amounts (5 to 15 g per day) as part of traditional dietary practices, alcohol (red wine in particular) has been associated with a lower risk of depression. Indeed, light to moderate alcohol consumption has been associated with lower systemic inflammation, a finding not evident in those with depression.”

It’s maybe not so much in our case suddenly eating a load more fermented food as much as it is consciously trying to eat far less processed foods.

The irony that indeed nowadays it is the overtly processed products in the supermarket that are less costly, and yet in many communities around the world it is these traditional inexpensive techniques for food preservation that they rely on to survive.

Making a real effort to eat far less processed food would be enormously beneficial to all in Western civilisation and if at the same time you add some fermented products into your diet in its place, you will not be surprised to see a healthier, happier you staring back in the mirror.

We’ve picked out a  simple traditional sauerkraut recipe that’ll get you on the road with the fermentation fad: 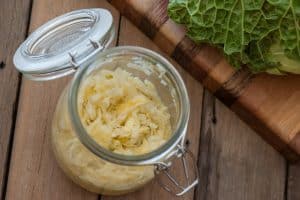